YPFDJ-North America: A Movement on the Move for Eritrea

The Las Vegas chapter of YPFDJ North America organized what will surely be remembered as one of the most thought-provoking and inspiring YPFDJ conferences of the past 11 years.

The lineup of presenters and speakers was as diverse – in age, affiliation, opinion and experience – as the audience itself. The extended weekend quite literally flew by with participants visibly leaving the event even more determined to shine the light on Eritrea’s narrative than they were when they first arrived.

The conference included powerful presentations by visitors from Eritrea, including Prof. Tadesse Mahari, Executive Director of Eritrea’s Higher Education Commission, who spoke about the Government of Eritrea’s strong commitment to and high investment in higher education; Rediet Tadesse, a YPFDJ-DC member, who has been serving in Eritrea for the past three years, and who did a brilliant presentation titled “Economic Contribution to Eritrea” that focused on what youth in the Diaspora can do in concrete and tangible terms to help build and grow the country’s economy; and Simon Tesfamariam, a medical student from Duke University, whose well-researched and timely presentation titled “A Critical Assessment of Eritrean Migration & Human Rights” where he spoke about Eritrea’s battle against the “traffic racket” and the “human rights” agenda. 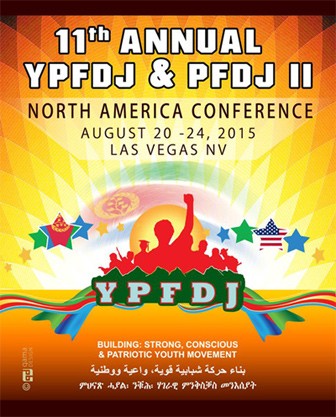 Participants were also treated to a unique photo exhibition titled “The Ideology & Practice of the People’s Front” created by a YPFDJ-Germany member, Mussie Abraha, who was able to brilliantly capture the Movement’s history and values through 21 poster-size photos.

Perhaps the highlight of the event came on the second day, when conference participants were treated to a surprise announcement: earlier that morning, across the oceans in China, Eritrea’s Ghirmay Ghebreselassie had won a gold medal at the World Athletics Championships in Beijing. At only 19 years of age, Ghirmay is the youngest ever athlete to win gold in the history of this championship.

Conference participants were treated to a play by play screening of Ghirmay’s race – and as cheers and tears filled the air of the conference hall, what struck every one of us was the astounding presence of mind that Ghirmay displayed as he entered the arena packed with thousands of spectators.

He consciously and deliberately waved for someone to give him his nation’s flag as he made his way to the finish line. Any other athlete would have made this historical moment about him or herself and would have been handed his/her nation’s flag after the race was over. Not Ghirmay.

This young man made a conscious decision to carry his whole nation on his shoulders that magical moment, and in what was the most emotional and heartfelt interview a few minutes after that spectacular show, Ghirmay was quoted saying:

“…it is difficult, but we Eritreans NEVER give up until the finish line…”.

Fihira, who was part of the starstudded cultural troupe on tour from Eritrea, took to the stage immediately after the announcement and gave a stellar performance adding to the already magical and unforgettable moment during the conference.

It is to be recalled that YPFDJ is made up of “strong, conscious and patriotic” Diaspora-based young Eritreans determined to support and complement the selfless work of Eritrea-based youth. The movement has clearly grown in the past twelve years since its inception and is registering commendable success stories all across the globe.

Kudos to YPFDJ-NA and particularly YPFDJ-Las Vegas for carrying on the torch so brilliantly in 2015 and making all of us look forward to a great year that is guaranteed to shine the light on the other narrative!