Wrong Information on Eritrean Athletes Must be Corrected

During these great times in sports achievements for the State of Eritrea we have all been immersed by the excitement that seems to have taken us away by storm. However, It is also important to correct information that is disseminated by the media or even the organizations that are not familiar with Eritrea. It is, therefore, our duty as citizens and ambassadors of Eritrea to keep an eye and inform those who have made an honest mistake.

As it is Eritrea is known to get bad press and sometimes wrong press on purpose because of outside influences which are bent on destroying its image. Image is everything and when our athletes or other high achievers speak to the media, there needs to be a standard in which we communicate.

For Example, in the above report from CCTV-Africa (see video below) which has done a nice story on Eritrea’s new Phenom Ghirmay Ghebreslassie who happens to have a last name as the legendary Haile Gebreslassie of Ethiopia. It is imperative that the association of the two athletes is differentiated by their nationalities.

While it has been rumored and may be true that the former coach of Haile is now the coach of the young Ghirmay who handed him the water in his final surge towards the IAAF marathon championship in Beijing 2015, the relationship ends there because Haile is an Ethiopian and Ghirmay is an Eritrean with the same last names.

CCTV’s reporter claims in the story that Ghirmay is the brother of Haile Gebreslassie which is wrong information and on the @3:34 mark of the story the Character Generator puts the name of Ghirmay with “Haile” in front of it.

CCTV-Africa hopefully will correct the mistake in their report. Here below is the story. 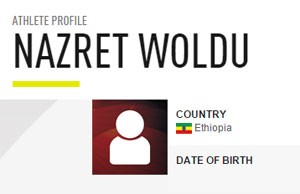 Meanwhile in the IAAF Biography page, the IAAF has made a mistake in identifying the nationality of ERITREAN athlete Nazret Woldu who has represented her country Eritrea on many occasions as an Ethiopian. This is wrong information and must be corrected.

Eri-International sports has contacted the IAAF and let them know that they have the wrong information on Nazret Woldu.

This is the response we got:

I quickly remove nothing.
When I will receive a copy of his passport saying
He is Eritrean I will take action, after the Championships.
In any case, be informed that I don’t dream the nationality
of an athlete, it means that I took it from the results of some race.

We responded back by writing the following e-mail:

A very good morning to you sir.Nazret is a female first of all and she is an Eritrean. Unless you have another name by the name of Nazret Woldu, I can assure you that she is an Eritrean and will be participating for ERITREA this week in the IAAF world championship. However I am concerned because if she wins and you put out her bio as an Ethiopian you will be held accountable for wrong information and believe me ERITREANS all over the world will let you hear it. I have contacted Nazret and I hope the Eritrean Athletics Federation will contact you ASAP.

It makes a huge difference as the flag which Ghirmay Ghebreslassie waved in his world championship performance came at a very high cost to the people of ERITREA! I also encourage all Eritreans to write to the IAAF’s statistics and documentation manager at the following e-mail and let him know that Nazret Woldu is indeed an ERITREAN and not Ethiopian.

His e-mail address is [email protected]