It is customary to wait for ‘independent confirmation’ of news in African countries, a euphemism to mean that a Western Journalist has not yet spoken about the subject matter.

When it comes to Eritrea, members of the Western Media blame the lack of access to the country for the many misleading stories circulated by them. They roll their eyes and say without any reservation, that the Eritrean government needs to let them in to see what it is actually going on.

But does giving access to Western media mean that the real story on the ground will be told? Does it guarantee unadulterated, impartial and factual coverage of events in the country?

When the recent revelations by the new Ethiopian government about the extent of Human Rights abuse and the large-scale corruption which paralyzed the economy are juxtaposed with the coverage of Ethiopia in the same period, it becomes clear that the Western Media had been anything but impartial and factual.

The BBC and other major news outlets have had a correspondent in Ethiopia for several years. In the case of the BBC and VOA, they have local correspondents and broadcast to Ethiopia in the three major languages of the country.

With all the access that the Western media had in Ethiopia, none of them raised the alarm about the mind-boggling corruption being carried out in broad daylight and with great impunity by the [the now-deposed regime of the] TPLF.

Instead, the Western Media was far too busy trying to sell us the notion that Ethiopia under the TPLF was undergoing an ‘economic miracle’, an ‘industrial revolution’ etc. 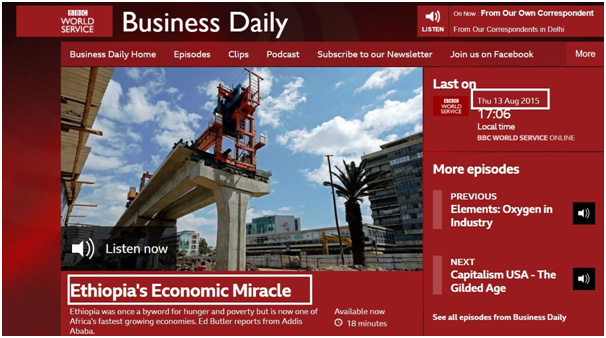 The Guardian in its article “Ethiopia hailed as ‘African lion’ with fastest creation of millionaires”, rubs salt in the wounds of Ethiopians and Africans, when it hails the ‘creation’ of millionaires. Of course, we now know how these millionaires were created, thanks to the new Ethiopian government revelations.

There are many more examples of how the Western Media was so desperate to portray TPLF led Ethiopia as a beacon of hope for those that wanted to achieve that all elusive sustainable economic development and growth.

What makes matters worse is the timing of some of these feel-good reports. The reports were filed at a time when Ethiopians protesting were being mowed down by the authorities.

The timing of the stories was such that any objective observer would wonder if the foreign correspondents were working for the TPLF. It was not just the pumping out of the stories of ‘miraculous economic growth’, where there was none, but the silence about the protests and killings that was going on under the very nose of these ‘independent’, ‘free’ journalists that made one wonder about their real intent.

You would think that these Western Media organizations would be open to criticism or be accountable to us. Criticize them at your peril, their gut reaction is to silence you, despite positioning themselves as the voice of the voiceless.

Mr. Will Ross was responsible for the setting up of the BBC Amharic, Oromo and Tigrynia services. Initially, he boasted rather condescendingly, that the services would help Eritreans and Ethiopians better understand their place in the World. He was not keen on being held responsible for his outrageous, so true to the traditions of the BBC, shut the door, thinking that will silence us.

Then you come to the foot soldier, the correspondent in Ethiopia (mainly based in the capital, perhaps because the creature comforts available there are far too enticing to venture beyond the city limits) who when challenged about his silence on the Oromo protests that were raging in the country at the time, did the standard BBC thing.

While the Western Media was busy spreading the TPLF’s propaganda, at the same time it was busy trying to undermine Eritrea.  Reports filed about Eritrea were so similar across the main players, one wonders if it was the same pen that wrote it.

The reports filed by those who had visited felt that they were written prior to the visit, with the purpose of the visit being some sort of weird authentication ritual. Having been to Eritrea and unable to find the nightmare that only exists in their warped mind, they say ‘I did not see this or that, but I was told that it exists’ or ‘something is stirring under the surface’ or some similarly ridiculous statement dripping with mendacity.

Some journalists even commented on the fact that their Europe based editors were asking them to change their eyewitness stories because it did not conform with the image of Eritrea they wanted to portray and had in mind.

Then you have the local language services of these Media outlets. Take BBC Tigrynia for example. We now know that there is widespread and serious human rights abuse under the TPLF rule. Yet, they never featured the story of an Ethiopian who was a victim of these abuses, while at the same time inundating us with allegations of human rights abuse in Eritrea.

The fact that victims of the TPLF have not been featured on this service is not because these victims are hard to come by, but because featuring them could derail the implicit aim of the BBC to bringing down the Eritrean government.

As for finding the victims of the TPLF, one needs only to look at the journalists working at the Ethiopian Satellite Television (ESAT). Nearly all of them had the first-hand experience of the human rights abuse committed by the TPLF.

This is not the time for Eritrea and Eritreans to account themselves to Western Media, but a time when Western Media has to justify itself not only to us but the people of the Horn of Africa and Africa as a whole.