Waiting Out the Enemy in Somalia

Al Shabaab, the militant Islamist group in Somalia, has taken over more territory over the past few weeks. With African Union and Somali troops stretched thin, particularly as Ethiopian forces withdraw from Central Somalia, the group been able to steadily add to its holdings. But there is only so much al Shabaab can do to extend its reach while international aid is being given to the Somali military. The group may have little choice but to dig in and wait, hoping that Mogadishu’s foreign partners lose interest in the conflict before the army becomes strong enough to stand on its own.

Ethiopia has a history of involving itself in the affairs of its eastern neighbor. After unilaterally intervening in Somalia toward the end of 2006, Ethiopia fought to beat back al Shabaab for several years before drawing down its troops in 2009. Some of its soldiers stayed behind, though most became part of the African Union Mission in Somalia (AMISOM). Ethiopia’s intention, however, is not to stabilize Somalia or to ensure AMISOM’s success. Rather, it is to prevent the conflict from spilling into its own ethnically Somali regions and to keep the Ogaden National Liberation Front — an Ethiopian separatist movement — from using the war-torn country as a haven.

With these objectives in mind, Ethiopia has no need to keep a tight grip on Somalia’s rural regions. Instead, it can afford to trade some territory for greater military might elsewhere. Perhaps unsurprisingly, Ethiopia has been slowly pulling its troops out of Somalia over the past year. But Addis Ababa recently picked up the pace of its withdrawal after declaring a state of emergency in response to a political uprising at home. The Ethiopian government is likely hoping to keep its forces closer at hand in case its own security problems escalate.

Even so, Ethiopia’s gains will come at Somalia’s expense. The drawdown of Ethiopian troops has already given al Shabaab an opportunity to ratchet up the pressure on AMISOM forces. Just last week, the militants promptly recaptured the towns of Halgan and Tayeeglow after Ethiopian soldiers vacated them. And despite its opponents’ best efforts, al Shabaab continues to move freely in southern Somalia and in the swaths of territory it still controls.

A Record of Resilience

Al Shabaab has shown its ability to rebound from defeat before. In the wake of Ethiopia’s initial invasion nearly a decade ago it did just that, gradually rebuilding its capacity by unleashing a relentless campaign of terrorist attacks and ambushes. After a string of modest military victories, the group eventually regained control over most of Somalia, becoming a formidable foe to AMISOM.

Still in its infancy when Ethiopian troops began to depart in 2009, AMISOM consisted of a mere 6,000 soldiers. Since then, however, it has swelled into a 21,000-strong force, thanks to additional contributions from African countries and Ethiopia’s renewed interest in Somalia. The mission’s expansion helped to shift the tide against al Shabaab once again, eventually leading to the group’s expulsion from Mogadishu in October 2011. From that point onward, AMISOM and Somali troops made their way throughout the rest of southern Somalia, freeing cities such as Kismayo and Baardheere from the militants’ grasp. And as al Shabaab lost access to the coastline and its traditional smuggling routes, it also lost access to foreign recruits and illegal weapons trade.

Yet these offensives never fully destroyed al Shabaab, nor did they rob it of all its territory. In fact, the group continued to control a significant portion of the country along the eastern banks of the Jubba River. Though its movements and resources were more restricted than they had been in the group’s heyday, it was still able to gather enough manpower and revenue to survive. Meanwhile, AMISOM, Ethiopian and Somali troops’ ability to hold and rebuild reclaimed towns and cities remained limited. When Ethiopian and Kenyan forces tried to recapture Baardheere from al Shabaab in mid-2015, for example, al Shabaab quickly overran the areas troops temporarily took control of as they moved toward the city.

From these toeholds, al Shabaab has spread back into parts of the country that had previously fallen to AMISOM troops. (The most notable of these areas is the coastal region that lies just south of Mogadishu.) AMISOM forces often end up abandoning isolated rural outposts that are not worth the effort needed to defend them from al Shabaab’s attacks. But by leaving them to the militant group, African troops give al Shabaab the space it requires to target other bases and acquire resources, revenue and recruits from villages close by. Recently, the group even managed to briefly seize the towns of Muuri and Afgooye, which are located near the country’s capital. Though unable to hold them for long, al Shabaab continues to be active in the area and has demonstrated its ability to launch attacks in the vicinity of Mogadishu, where the largest concentration of security forces in Somalia is stationed.

A War of Attrition

This is not to say that al Shabaab is capable of defeating the Somali army outright, supported as it is by Mogadishu’s numerous allies. But persistent attrition and battlefield failures are weighing heavily on AMISOM. Several countries have even threatened to reconsider their contributions to the mission, or, in Ethiopia’s case, have already begun to withdraw their troops. Few of the mission’s participants want to be responsible for ensuring Somalia’s security in the long run, a fact al Shabaab is keenly aware of. The group’s leaders know that if they keep pressure on AMISOM troops while surviving any reprisals, they may someday see the mission’s end. Should the group outlast the forces trying to destroy it, it may have a chance of regaining control of the country.

Of course, al Shabaab will not be without its challenges in the meantime. The high-value target campaign being waged against it has begun to take a toll, as has infighting over the group’s allegiance to other jihadist groups such as al Qaeda and the Islamic State. To make matters worse for the group, it currently does not have the ability to seize and hold Somalia’s largest population centers. Moreover, though the capabilities of the Somali military are similarly constrained, it has made progress in forming several professional units. All of these factors point to a long battle ahead for al Shabaab, one it may only win if Somalia’s foreign backers pull away from the fight before the army is ready to shoulder the burden of protecting the country on its own. 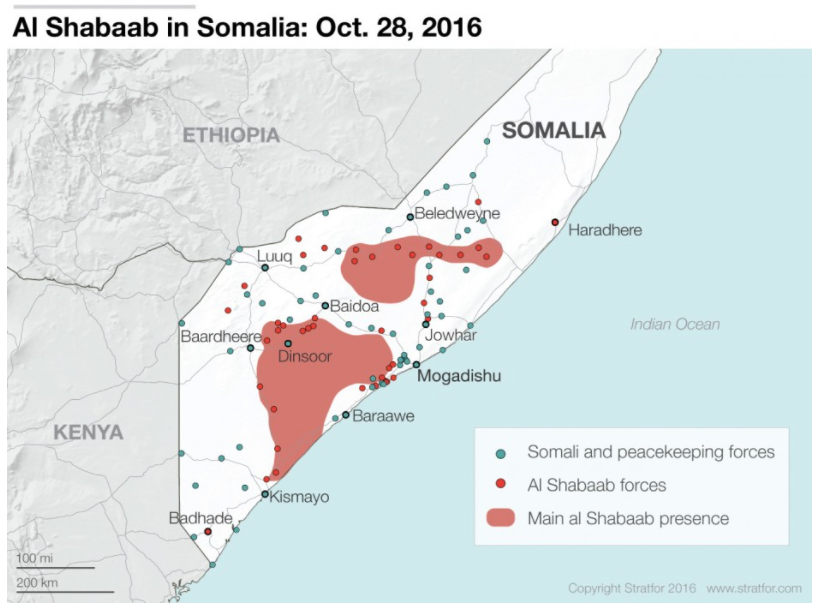