US Warns Ethiopia Against Using State of Emergency to Crackdown Dissent

The United States warned its African ally Ethiopia on Tuesday not to abuse the state of emergency it declared this week to suppress dissent and welcomed talk of political reform.

Ethiopia declared an emergency on Sunday after six months of anti-government protests, but on Tuesday Prime Minister Hailemariam Desalegn promised that opposition voices would be heard.

US State Department spokesman John Kirby welcomed this offer from the government “to address some of the grievances raised by protesters such as land rights and electoral reform.”

But he urged President Mulatu Teshome’s administration to “clarify” how it intends to implement a state of emergency which authorized “detention without a warrant, limitations on free speech, prohibitions on public gatherings and the imposition of curfews.”

“Even if these measures are intended to restore order, silencing independent voices and interfering with the rights of Ethiopians is a self-defeating tactic that exacerbates rather than address those grievances,” he argued.

Ethiopia is facing its biggest anti-government unrest in a decade, with unrest among the majority Oromo and Amhara ethnic groups which feel marginalized by a minority-led government.

Tensions have been rising since an Oromo religious festival last week ended in tragedy when police fired tear gas on protesters, triggering a stampede that left more than 50 dead.

The declaration of a six-month state of emergency is unprecedented in the 25 years the current Ethiopian government has been in charge.

The United States regards Ethiopia as its key partner in the Horn of Africa, and works with it in its efforts to resolve crises in neighboring South Sudan and Somalia. 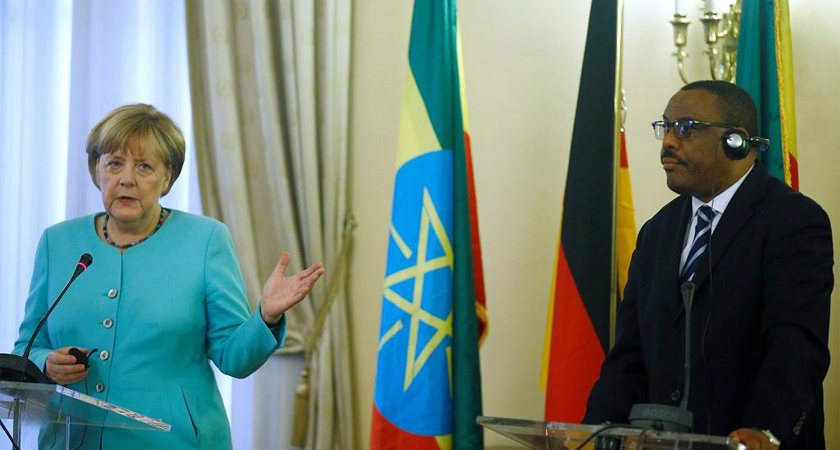 German Chancellor, Angela Merkel, has asked the Ethiopian government to allow protests and that police response to these protests should be proportionate.

She also called on the government to include opposition groups in the political process. Merkel is currently in Ethiopia on the last leg of her historic African tour. Her trip started in Mali on Sunday, before she went to Niger on Monday.

There was pressure by rights groups tasking the German leader to speak on human rights in the country. Ethiopia over the weekend imposed a 6-month state of emergency in a bid to quell anti-government protests. The United Nations and other bodies have charged the government to desist from mass arrests and the partial internet shutdown.

Ethiopian PM Hailemariam admits protest deaths could exceed 500, but says the exact figure is not the key issue https://t.co/3Y5Yiwazvx pic.twitter.com/dpI3A63Ii7

Merkel’s African tour was focused on seeking investment opportunities and security cooperation with the host nations. The German government hopes primarily to drive economic development on the continent and in the long run curb future waves of migration to Europe.

Desalegn and Merkel held a joint press conference after the prime minister received the German leader at the national palace.