US Statement Exposes PM Hailemariam’s Lies to the Ethiopian people

Ethiopia and the United States held face-to-face discussion in New York on September 21, 2016 on the side of the UN General Assembly. The respective sides were led by the TPLF Prime Minister Hailemariam Desalegn and his opposite number US Assistant Secretary of State Linda Thomas-Greenfield.

The subject of their discussion was not the usual back-patting and praises. This time there is no way of hiding the dangerous situation evolving in Ethiopia because of popular uprising against the ruling Tigray People’s Liberation Front (TPLF).

The US official made it plain that the situation in Ethiopia is dangerous. In particular she put her stress how much the United States is very concerned about the deepening instability and the violence, particularly in the Oromia and Amhara regions, according to an editorial on the Voice of America.

Ms Thomas-Greenfield criticized the response by the TPLF regime to protests in the country as “intense and somewhat harsh crackdown”. She added:

“We have had discussions with the Ethiopian government encouraging that they have dialogue, and that they open the possibly for press freedom, civil society’s ability to function, and that many of the people who have been put in jail be released.”

Consequently, the Assistant Secretary of State realistically pointed out that the United States believes the situation in Ethiopia “could deteriorate and that the Ethiopian government is aware of that possibility as well.”

“We’ve met with Prime Minister Hailemariam [Desalegn] in New York, and we have encouraged him to look at how the government is addressing this situation.”

It is so pathetic that without even feeling how much the United States Government would contempt him and his colleagues for distorting the real gist of its message, the prime minister to whom lies always are a second nature released a new story on the TPLF news agency Fana Broadcasting that pleases his bosses. In that story, he told the Ethiopian people how much the US was pleased with the actions the TPLF has been taking to end the instability in the country.

For me, the way the news was couched, firstly sounded exaggerated and secondly it was intended to please the people in the security and the army’s top brass. Unfortunately, the language rather was saying the US was supporting TPLF killings in the country, instead of the search for stability.

That same day, i.e., on September 21 after reading that news item, I twitted the following:

Actually, what the US had said to the prime minister, whose problems with personal integrity is common knowledge among Ethiopians, read:

“We think,” she said, “it [the Ethiopian situation] could get worse if it’s not addressed – sooner rather than later.”

Any normal person could get a sense of what is happening in Ethiopia, much less a superpower. After all, the United States Security Advisory for Ethiopia this time around is pretty long, extending into February 2017, which is an indication that the US has anticipated that the current crisis would linger, getting worse with every passing time.

The fear now is the possibility of widespread bloodshed in the country, although nothing under the Ethiopian skies is out there to reverse the likelihood of collapse of the most hated and corrupt regime in Ethiopian history.

TPLF’s hands are stained with lots of blood of our people. On this very Monday, according to documentation by social media, there were killings in many parts of Oromia – from Harare to Mendi in Wollega. In Amhara region, it is the same story of killings and abductions.

By the time, the TPLF is down, Ethiopia is likely to have fewer youth than at the start of the popular uprising. That is the extent of the killings and imprisonments everywhere in unmarked prisons and those that get tortured on a daily basis. Many have been cruelly killed and churches quietly report that in Amhara, night burials by unknown people have become common experience, as the TPLF security forces remove the bodies of those they have killed under the cover of darkness.

For now, Amhara and Oromia regions are getting media covers. Of course, it is a deserved coverage, though not enough because these two regions have enormously suffered, continue to suffer and having heroically shown their resolve not to give up their struggle.

On September 13, 2016, I urged the US to cleanse its name and image the alliance with the TPLF has hurt. In that article, I expressed my disappointment with President Obama’s policy, which “While Ethiopia has been in the TPLF hell, he has chosen to close not only the eyes of the people of the United States, praising the murderers. But also he has restricted the rest of the Western world, since no one country could dare take action against the US’s best African ally.”

While I have a sense of the US dilemma in the Horn of Africa, as an Ethiopian witnessing the cold-blooded massacre of my fellow countrymen, I could not help being angry at the US allowing its name to be soiled by the alliance it has forged with the TPLF.

Nonetheless, since the affairs of normal states must continue, we see in the Horn of Africa that the United States is taking measures to ensure its security interests, especially in fighting the Al-Shabab terrorism, at a time when the TPLF is bogged down with massacring Ethiopians and the Mogadishu government is lame duck and like all other African regimes is preoccupied with its power and forthcoming election. 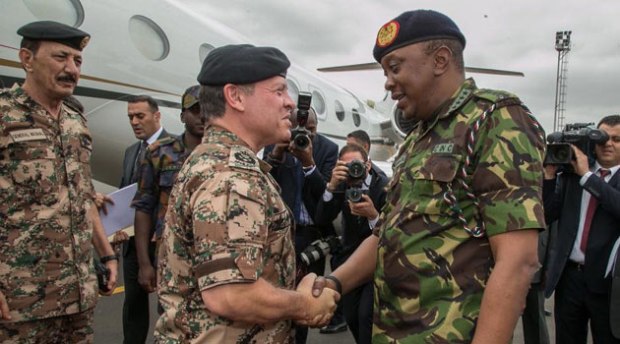 And now, I somewhat feel the US has chosen to take the right course of action regarding the TPLF. If you ask my opinion, as I indicated earlier, there is nothing to reform inside the TPLF. Therefore, the only reliable action for the rest of Ethiopians is prosecution of the habitual criminal murderers. This would create for Ethiopians the right condition to rebuild their future and their country the guerrillas in state power have wracked.

As to US interests in the Horn of Africa, we see that Jordan is becoming Horn of Africa’s partner in security matters. Today, for the first time, King Abdullah II bin Al-Hussein of Jordan is in Nairobi on a state visit.

Kenya’s Capital FM indicated the purpose of the Jordanian monarch’s visit, a very good friend of the West, is to hold talks with President Uhuru Kenyatta on security issues among other planned activities.

Recall also that in the third quarter of August 2016, Secretary of State John Kerry was in Kenya to discuss security arrangements for the Horn. I concluded already then that the US has decided to move on, with the rest of the East African nations. In Nairobi, turning to East African states, Mr. Kerry noted:

“And I think we all were agreed, and I know that both the Somali, I know that Kenya, and I believe the Ethiopians are prepared (emphasis added) to work with the United States in order to put greater pressure on al-Shabaab in the meantime.”

One latest regional development is also the increasing opening up for Eritrea, because of which it has been first called from the cold by the European Union and then on a bilateral basis with some individual European nations.

Ethiopians should only strengthen their resolve to see the back of the TPLF, since there is nothing in their midst that is reformable or salvageable.

The United States is very concerned over the situation in Ethiopia, particularly the instability in the Oromia and Amhara regions, Assistant Secretary of State for African Affairs Linda Thomas-Greenfield said in an interview. Speaking in New York on the sidelines of the UN General Assembly meeting, Assistant Secretary Thomas-Greenfield called the response by the government to protests an “intense and somewhat harsh crackdown:”

“We have had discussions with the Ethiopian government encouraging that they have dialogue, and that they open the possibly for press freedom, civil society’s ability to function, and that many of the people who have been put in jail be released.”

In Oromia anti-government protests began in November 2015, and they have also occurred in the northern Amhara region.

Assistant Secretary Thomas-Greenfield said the United States believes that the situation in the country could deteriorate and that the Ethiopian government is aware of that possibility as well.

“We’ve met with Prime Minister Hailemariam [Desalegn] in New York, and we have encouraged him to look at how the government is addressing this situation.”

“We think,” she said, “it could get worse if it’s not addressed – sooner rather than later.”