Why Has the US Sanctioned Eritrean Navy?

The United States has banned the export of munitions, technologies and other goods to the Eritrean navy by US government agencies and departments, according to a new State Department directive.

The US restrictions aren’t meant to target Eritrea per se but to discourage Eritrean dealings with US rivals Iran, North Korea and Syria.

An order published last week in the US Federal Register by Department of State designates “Eritrean Navy (Eritrea) and any successor, sub-unit, or subsidiary thereof” under the Iran, North Korea, and Syria Nonproliferation Act.

Besides the Eritrean navy, the US State Department fingered several Chinese companies and individuals, Russian companies and a Burmese military department, among others.

A senior US official speaking to reporters via teleconference, who did not want to be named explained, “These entities and individuals were sanctioned for the transfer to or acquisition from Iran, North Korea, or Syria of goods, services, or technology listed on multilateral export control lists or other items that could make a material contribution to the development of weapons of mass destruction or missiles.”

However, when the official was asked by a reporter for details about how the Eritrean navy is allegedly involved in “illicit trade” with Iran, North Korea or Syria the US official declined to elaborate. “I really can’t get into the specifics of why entities were sanctioned,” said the American official. 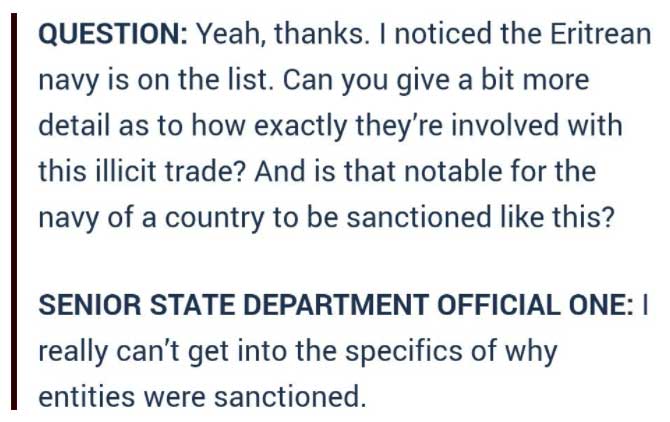 Eritrea’s government has yet to respond to the accusation.

It is not clear whether the American officials believe that Eritrea’s navy provided technologies, supplies or assistance to North Korea, Syria, Iran or a combination of the three. Alternatively, they could be suspected of buying military technology or munitions from one of these countries.

Ann K. Ganzer, the US Acting Assistant Secretary of State for International Security and Nonproliferation, wrote in the Federal Register that the new measures “will remain in place for two years from the effective date, except to the extent that the Secretary of State may subsequently determine otherwise.”

The new sanctions come shortly after a US diplomatic effort in East Asia to discourage North Korea from developing ballistic missile and nuclear technologies. Secretary of State Rex Tillerson visited China, Japan and South Korea in an effort to enlist them in sanctioning North Korea for its ongoing nuclear missile research program.


With al-Shabaab moving north from Somalia, it is vital that US counter-terrorism forces have access to #Eritrea's ports and airports.