Absent formal judicial systems, traditional justice systems and customary practices are critical to ensuring that people have access to justice. In Eritrea, many rural communities denied access to dispute resolution as a result of formal legal services where people could present their cases or a legal system that did not take into account cultural or traditional practices.

The unequal distribution of the formal courts in Eritrea resulted in community members traveling long distances and incurring huge expenses to present their cases in court. Some people in the Southern Red Sea region had to travel over 300 kilometers to attend courts in Massawa or Assab.

The community further had challenges understanding the complex procedures in a formal court of law. Other challenges included language and cultural misunderstanding between parties appearing in the court or the judge and the litigants. These challenges among other led to delays in courts making their ruling as well as many people feeling dissatisfied with the court decision.

To address access to justice challenges in Eritrea, UNDP supported the government in the implementation of a traditional dispute resolution system, which complemented Eritrea’s formal judicial system.

Elected community members serve as judges for a four-year period. And being members of the communities they serve gives them trust and leverage in bringing disputing parties closer towards out-of-court settlement.

The community courts also take into account geography, ethnicity, and language. Proceedings are conducted in a common tongue and dispute resolution culture of the parties understand the court’s rules, further increasing the likelihood of an amicable solution.

Women are also a contributing factor to the success of the system. In fact, women have been elected into community courts, even in communities where women were traditionally not allowed to represent public office.

Mr. Ibrahim Sheikh Mahmoud, a community judge said that the majority of the cases addressed could be effectively settled.

“It attests to the citizenry’s inclination to be law-abiding. People could save time and energy following the launching of such judicial service.”

Despite financial and capacity limitations, community courts have achieved remarkable successes in the number of cases amicably resolved. 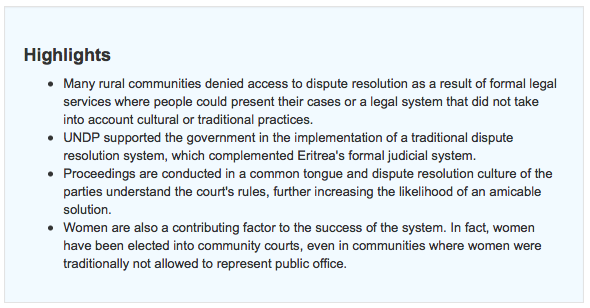