The United Nation Development Programme (UNDP) Eritrea, in partnership with Zoba Anseba, the Ministry of Agriculture (MoA) and the Ministry of Land, Water and Environment (MoLWE) organized an event to observe UNDP’s 50th Anniversary on 5th and 6th of May 2016, in the Anseba region of Eritrea.

The two day event included field visits to some of UNDP projects in Anseba, one of the six regions of Eritrea. The field visit was an opportunity to showcase UNDP in action through project sites tours and engagement with communities in Anseba region, including youth who have benefited through the “Youth employment skills project“.

The project is implemented by NUEYS and it’s supported by the Governments of Norway and Japan. The youth gave testimonials and exhibited some of the items they have made at the metal and wood workshop at Keren, the capital of Anseba region.

While presenting her speech, the UN Resident/Humanitarian Coordinator and UNDP Resident Representative, Ms. Christine N. Umutoni said that current development agenda of the Sustainable Development Goals (SDGs), has reminded us that no one should be left behind.

“Today you had an opportunity to interact with the youth. You have heard their experiences and seen their work at the youth centre. In 2015, 1,046 youths were trained in various centres around the country,” Said Ms. Umutoni.

On the 6th of May, participants visited a Climate Change Adaptation project in Habero. The Climate change adaptation programme in water and agriculture in Anseba region is supported by Adaptation Fund (AF) and implemented by the Ministry of Agriculture, Anseba region. The community benefits from a Minimum Integrated Agricultural Package that includes:

Integration of irrigation and climate-smart agricultural production technologies such as use of solar powered irrigation;

Development of a community-based early warning system to reduce climate risks and;

The participants took a tour of the project site, which spans about 5 kilometres of irrigated farmlands. One of the innovative aspects of the project is the use of solar energy to power the water pumps that supply water from the reservoirs to the farms.

In Habero, UNDP also partnered with the Ministry of Agriculture to commemorate the National Greening Day, which is observed on the 15th of May. Led by Hon. Arefaine Berhe, Minister of Agriculture and Hon. Tefsai Gebreselassie, Minister of Land, Water and Environment, guests and community members planted trees on the farms in Fiza. The trees were provided by the Department of Land and Agriculture, Zoba Anseba.

More than ever, UNDP is committed to finishing the job we started 50 years ago and is looking towards the future. We are looking forward to embarking together upon a new era: the era of the Sustainable Development Goals. These are 17 goals to guide the world for the next decade and a half.

Each and every one of us is beginning a journey that we hope will lead to a world that is prosperous, fair and inclusive, and it is a journey we want the people of Eritrea to join. 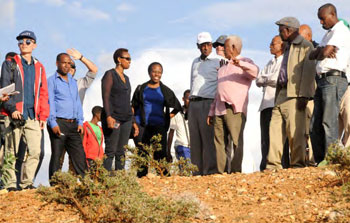 The United Nations Development Program (UNDP) has marked its 50th anniversary of its establishment in Habero subzone, Anseba region.

The Minister of Agriculture, Mr. Arefaine Berhe, the Minister of Land, Water and Environment, Mr. Tesfai Ghebreselassie, the governor of the Anseba region, Mr. Ali Mahmud, Ms. Christine N. Umutoni, UNDP resident representative in Eritrea as well as Ambassadors and Diplomats were present at the occasion.

Participants of the event also paid a visit to Hamelmalo and Habero district areas, Keren subzone, to observe the concerted development programs being undertaken there.

Likewise, the participants of the event also visited the youth vocational training center in Keren town, the Musha dam in Hamelmalo sub zone as well as the Fiza irrigation farm operating with solar energy. They were also received briefings by beneficiaries of the projects.