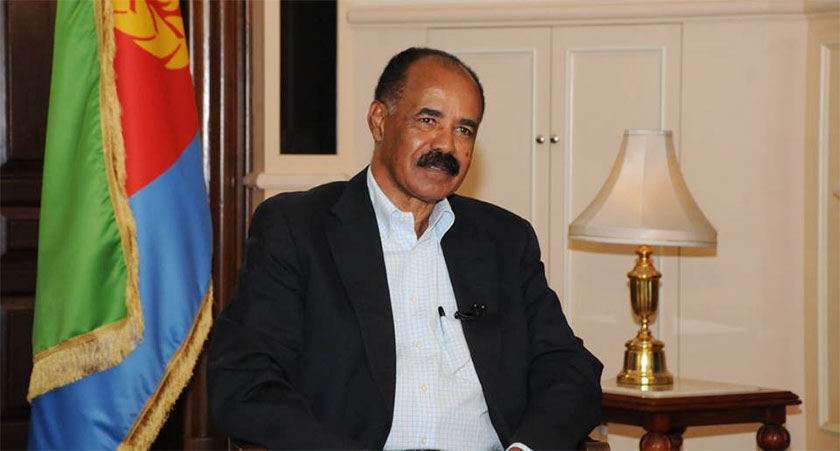 President Isaias is known for giving thorough interviews that require three or four takes to fully appreciate the depth of his thinking and grasp the far-reaching implications of his responses.

The interview he gave Eri-Tv on Saturday 3 November 2018 [see below], was no different. If one is honest and serious about wanting to understand where we as Eritreans stand today, how we reached this stage, where we are heading, and the role each of us ought to play in consolidating this peace process, then one must listen carefully to every single word in this historical interview, the President’s first since the signing of the Joint Declaration of Peace and Friendship between Eritrea and Ethiopia on 9 July 2018.

I watched the interview live on Eri-Tv on Saturday at 8pm, and then twice more via Denden Media’s YouTube channel, pausing, replaying, taking notes, and underlining the parts I thought needed particular attention.

The whole interview was absolutely brilliant, thought-provoking, and challenging, in that it asked viewers to step out of the comfort of the seemingly easy to understand immediate present and venture into a much wider, deeper, and more exhaustive analysis.

While the entire interview would probably take several articles to fully explain, here I would like to highlight the detailed answer President Isaias gave in response to the first question. This response was pivotal in setting the tone for the rest of the interview and I feel that some people may quickly pass over it as they search for information affecting the immediate here and now.

The image that kept coming back to my mind as President Isaias responded to this first question was the Sankofa bird. Sankofa, a word in the Twi language of Ghana, is made up of three concepts: San, to return backwards; Ko, to move forward; and Fa, to fetch.

The symbol for Sankofa is a mythical bird with its feet firmly planted forward and its head turned backwards, fetching an egg from its back. For the Akan, an ethnic group living in Ghana and the Ivory Coast, Sankofa represents the need to reach back into one’s own history to reclaim that which is lost in order to move forward towards a bright and strong future.

In other words, although there must always be forward movement, the knowledge, experiences, and lessons gleaned from the past must never be forgotten. Instead, they must inform and serve as a guide or compass when planning for the future.

As he carefully responds to the first question – which the interviewer framed around the recent announcement by the new administration in Ethiopia that it would unconditionally accept the 2002 EEBC ruling – President Isaias reminds us of the need to critically examine the root causes of the challenges faced by Eritrea over nearly eight decades. He also reminds us of the need to search for the actual, often times hidden, reasons for the obstacles in Eritrea’s path. Perhaps most importantly, President Isaias signals the importance of broadening our focus beyond the so-called “border conflict” and placing this new period, this new epoch, in a much wider historical context that includes the now failed hegemonic maneuvering and designs for the Horn of Africa region.

This maneuvering, President Isaias explained, began long before Eritrea gained its independence in 1991, dating back to when John Foster Dulles, in 1952 , made the following infamous statement at the UN,

“From the point of view of justice, the opinion of the Eritrean people must receive consideration. Nevertheless, the strategic interests of the United States in the Red Sea Basin and world peace make it necessary that the country be linked with our ally Ethiopia.”

This effectively denied Eritreans their right to self-determination and set the stage for decades of misguided Western foreign policy toward the Horn of Africa.

No sane Eritrean can underestimate the impact of this statement. Not even the most ardent members of the anti- Eritrean camp can deny the fact that hundreds of thousands of lives could have been saved had the Eritrean people been allowed to peacefully choose their own destiny, just like the other African countries which had been colonized.

Another period that President Isaias highlights as key to understanding where we find ourselves today is the one almost immediately after Eritrea’s independence. During that period, a deliberate plan was hatched to characterize Eritrea as a “spoiler” in the region. Creating problems and proposing to “solve” them became the order of the day.

This plan, as President Isaias explained , relied heavily on the shortsightedness of a partner in this region, a role carried out by the TPLF. The TPLF, thirsty for regional hegemony, was blind to the long-term ramifications of its non-questioning acceptance of orders. The cyclical hostility against Eritrea and the manufactured “border conflict” were part of this plan, as were the other “territorial” conflicts Eritrea found itself in, such as those with Yemen and Djibouti.

The baseless accusation of Eritrea supporting terror in Somalia, which led to illegal sanctions, was also part of this plan to corner and subdue Eritrea. In addition, Eritrea was accused of being undemocratic and failing to protect human rights, with democracy being narrowly defined as procedural actions meant to install a puppet government and human rights understood solely in terms of civil and political rights.

All of this falls under the category of “regime change” and anyone familiar with the concept of the “new world order,” which President Isaias briefly touches, can recognize that everything Eritrea has faced since its independence is similar in design, although possibly greater in intensity, to the conspiracies faced by other countries. All of these countries have had one thing in common: they were targeted for refusing to toe the line and, in the case of Eritrea, for being a “rotten apple” or, in other words, a “bad” good example for Africa.

President Isaias’ response to the first question jolts one back to the very hostile past – one filled with death, destruction, displacement, denial of justice, manipulation, destabilization, demonization, manufactured conflicts, psychological warfare, politicized migration, plans for regime change, and everything else under the sun meant to destroy Eritreans and Eritrea.

However, it then moves to drawing lessons and strength from the trials and tribulations endured about how to move on, how to build trust, how to engage, and how to recognize narrow-minded spoilers. Finally, it prepares one to sail on a path towards a bright and hopeful future for Eritrea, for Ethiopia, and for the Horn of Africa – a future based on a shared vision of a prosperous region, cooperation, development, progress, respect, and most of all, peace and unity in diversity.

As President Isaias broke down the past eight decades into four blocks of time, one could not help but nod in full agreement. Understanding each of the four time periods in detail is absolutely crucial to appreciating the sacrifices paid, the opportunities lost, the resilience needed to endure, and the strength gained, as we enter this new era. We must ensure that this new chapter is firmly forward-looking, sustainable, and fully secure.
Sankofa, over and over again.

Looking back and gathering lessons from history does not minimize the importance of the current epoch and cannot diminish the bright, promising future ahead. On the contrary, as President Isaias moves on to the second, third, fourth, and fifth questions – which deal with, inter alia, the necessary environment for this peace to solidify and bear real, tangible fruit, the need to identify and ignore spoilers who were obviously caught off-guard and will do anything to derail the progress made thus far, the positive effects the rapprochement between Eritrea and Ethiopia has had on the entire Horn of Africa region and perhaps the whole continent, and the economic, social, cultural, and political plans in place – he makes it very clear that understanding history and context is vital in order to confidently move forward.
.