The statement said that Mbabazi has been replaced by Ruhakana Rugunda*, minister of health.

“I, therefore, hereby forward the names and the curriculum vitae of Dr. Ruhakana Rugunda to you for the required Parliamentary approval,” Museveni said in a letter to Parliament Speaker Rebecca Kadaga.

Mbabazi was a former close ally President Museveni, who consider Mbabazi as his closer ally since the bush straggle is now start seeing him as a potential rival in the 2016 elections.

There has been a reported rift between Museveni and Mbabazi over the latter’s presidential intentions to contest in the 2016 presidential elections on the ruling National Resistance Movement (NRM) party ticket.

Besides being the PM, Mbabazi was the Secretary General of the ruling NRM party and for quite some time, some party members have accused Mr Mbabazi of privately using the position to mobilise support for his own presidential ambitions.

To frustrate his intentions, if any, MPs from the governing National Resistance Movement earlier this year decided that President Yoweri Museveni would be their presidential candidate for 2016, again.

Mr Mbabazi himself, however, publicly maintained his support for the president – saying he would not challenge President Museveni as long as he was party leader.

Instead, however, Mr. Mbabazi’s wife publicly criticised the decision to name President Museveni as the presidential candidate for 2016 (his fourth term).

Mr Museveni has been in power since 1986.

In a statement he later issued, Mr. Mbabazi rather thanked the President for giving him the opportunity to serve his country. (Read the full statement below) 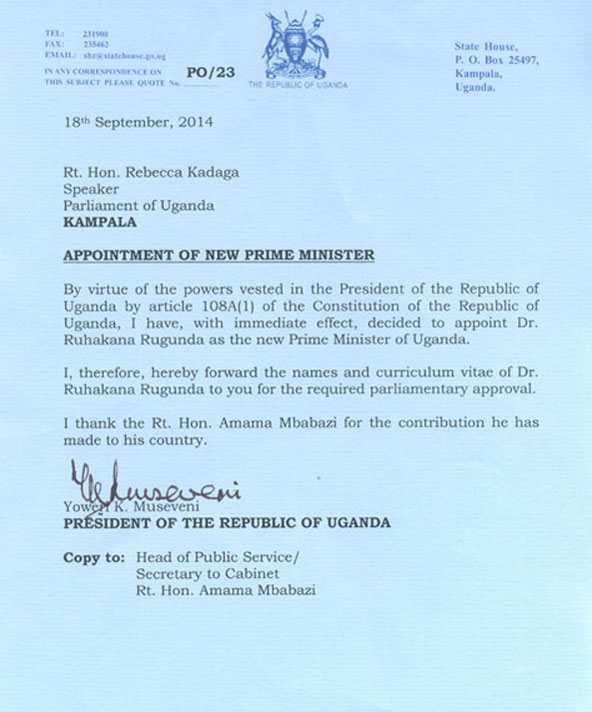 I thank the President, HE Yoweri Kaguta Museveni for having given me the opportunity to serve my country as Prime Minister and in other capacities prior to this. I will continue to offer my services to my country in whatever capacity I can. I have congratulated Dr. Ruhakana Rugunda on his appointment.

I have no doubts that he has the capacity to execute the duties of prime minister effectively. I thank my colleagues in Cabinet for the maximum cooperation I received as Prime Minister. I also thank the Public Service, especially those that I’ve worked with all these years.

I appreciate the great service they have rendered to this nation and will remain loyal and dedicated to working with them whenever my services are needed. For God and my country.

– – – – –
(*) – As Uganda’s former Ambassador to the UN, Dr. Ruhakana Rugunda was the person that played an instrumental role with in the UN by sponsoring and drafting resolution 1907 on behalf of Susan Rice against Eritrea. For those who have followed him for some time, he is an avowed anti-Eritrea, pro-Ethiopia diplomat, now at the helm of the Ugandan cabinet.