The tournament has been special throughout, the camaraderie between players and teams, the different culture on display spoke volumes. Eritrea was greeted in the tunnel by the Ethiopian players after their win over Sudan. The Sudanese did the same the very next day, this time they greeted their close neighbors South Sudan.

During the match between Eritrea and Somalia, Eritrean players in the bench went over to the Somali’s side during the latter’s national anthem and stood next to each other hand in hand. We saw numerous occasions that cemented football’s other name ‘the people’s game’ even more.

However, when the final was played out between Uganda and Kenya yesterday and the former capped off a dominant display of football throughout the tournament by beating their opposition 4-0, the entire match felt like it was boys against men.

Uganda began the match on top and took the lead within 17 minutes when Mutyaba Travis skipped past a couple of Kenyan players with some neat footwork and laid the ball for Ouke Patrick to cross. Kenyan goalkeeper misjudged the ball and missed it when he came out of his area to collect, Ogwal Devis of Uganda duly slotting the ball into the back of the net.

Uganda kept pushing for more goals in the first half and saw Kyeyune Abasi hit the post. Five minutes from the end of the first half, Uganda almost got a second goal when Ogwal Devis headed the ball in the penalty box but his effort was saved by the impressive Lwangu Alvin, rising majestically to tip the ball over the crossbar.

Deep into the first half, Uganda won a free kick on the edge of the penalty box. Mutyaba Travis stepped up to take it and sent a low driven shot towards goal, Lwangu Alvin couldn’t do anything this time around as the ball went past him and ended at the back of the net, Uganda 2, Kenya 0.

Kenya looked hopeless and who can blame them. The gulf in physical difference between the Kenyans and the Ugandans was quite obvious. Kenya could barely get out of their own half each time getting muscled off the ball.

For the remainder of the second half, it was all about damage control for the Hurambee stars and the match ended 4-0. Uganda are the first team to win the inaugural CECAFA U-15 tournament.

At the end of the match, coach Sagar Lakhani said in the context of the whole situation his team’s outing has been successful. Adding that they came into the tournament with three objectives: to learn, to play attractive football and finally win.

“We have achieved almost all. Today we couldn’t match our opponents physically but in terms of pure football played there was no difference,” Said Sagar.

Coach Magerwa Jackson of Uganda on his part said his team played good attacking football and defended smartly throughout the tournament.

“I am not surprised by the way they have performed,” he said.

When Coach Magerwa Jackson was asked whether his team was challenged throughout the tournament or not to which he replied there were moments where his team were put under pressure in some matches but the intelligence his players show in most of them exceeded his expectation. 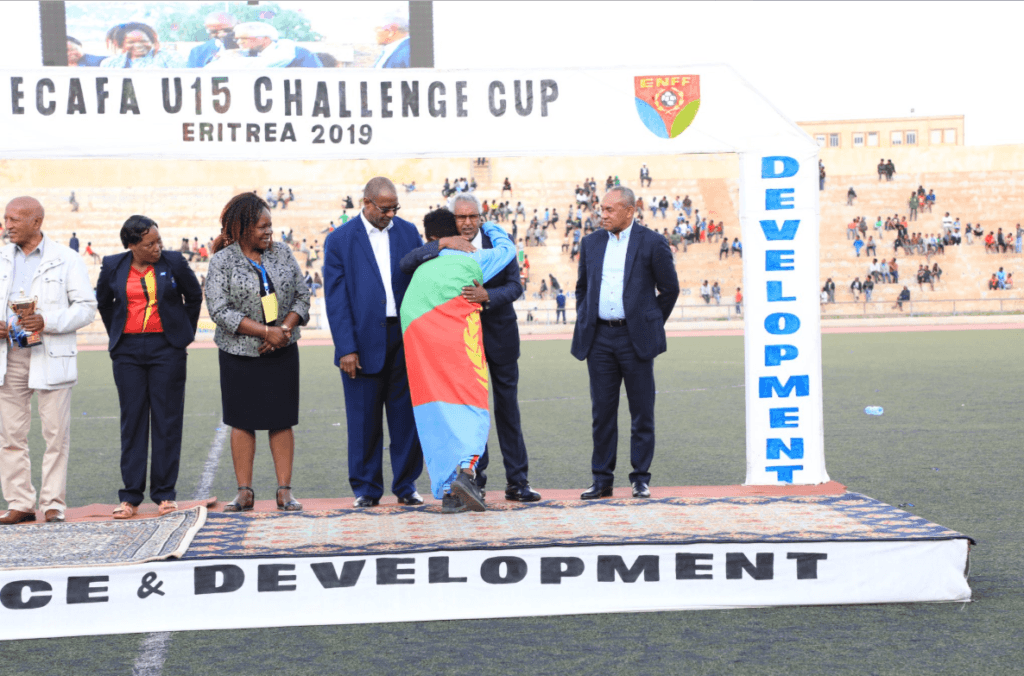 In the early kickoff of the day, it was Burundi who took on Rwanda for the 3rd place play-off.

Surprise packages of this tournament Burundi took the lead through Igiraneza Adelard in the sixth minute, first half ending with Burundi in front.

In the second half, Burundi seemed to have ran out of stem as they couldn’t continue with the same intensity. Rwanda kept asking question at the Burundi defense and eight minutes from the end of normal time, the wasp got their break from Uwizeyimana Celestin.

The Burundi players couldn’t believe their luck as most slumped to the floor. The match went into penalty kicks. Rwanda’s goalkeeper Nshimiyimana Christian, the hero of the day, as helped his nation secure 3rd place in the tournament.

On the other hand, Temesghen Tesfai of Eritrea won best player of the tournament while Kenya’s Lwangu Alvin won best goalkeeper as Uganda’s Kyeyune Abasi took the gong for most goals scored.

This is a step in the right direction for the development of the sport in the region. Eritrea has hosted a successful tournament by all measures.

However, as Ulric Mathiot a FIFA instructor who helped kick start the grassroots program here in Eritrea and Somalia said, “the work has just begun.”