“… but only if the international community guarantees more funding and donates equipment, such as attack helicopters.” – President Museveni

President Museveni has told United States officials that Uganda is ready to deploy 5,000 additional troops to bolster military operations of the African Union Mission for Somalia (AMISOM) against the resurgent al-Shabaab insurgents.

Sources familiar with the discussions told Daily Monitor that Gen Museveni announced the offer in a meeting with Mr Donald Yamamoto, the acting US assistant secretary of state for African affairs, in New York last month.

The President, however, told his American hosts that Uganda would only send more troops to Somalia if the international community commits more predictable funding and donates equipment, force enablers and multipliers such as attack helicopters.

Uganda, with more than 6,000 troops in Somalia, is the largest contributor to the 10-year-old AU-led mission. The operation has lately been threatened by reduced funding, non-payment and declining morale of the combat soldiers and defections to al-Shabaab of Somali troops, already too weak to hold liberated territories.

In the New York lunch meeting, which happened on the sidelines of the United Nations General Assembly, Mr Yamamoto offered no explicit response to President Museveni’s offer, according to one diplomat.

He, however, praised Mr Museveni as a long-serving experienced leader whose “strategic ideas” the United States values and will consider.

Gen Museveni had reasoned that increasing the number of troops in Somalia was necessary for an all-out offensive on the al-Shabaab instead of the current fractional approach where liberated areas are quickly recaptured by the insurgents when foreign forces move to new forward operational bases.

“The President said he can deploy 5,000 more soldiers to finish the job on the condition that they are given equipment and force multipliers,” a source familiar with the discussion said. “He said AMISOM must go to the heart of the al-Shabaab and destroy them from there to finish the job.”

This latest revelation contrasts with the government’s announced plan to reduce the UPDF presence in Somalia effective next year.

>> ALSO READ : Uganda to withdraw troops from Somalia by December 2017

A senior security official told Daily Monitor that there was disquiet among troops at the battlefront that withdrawing their colleagues would render the few left behind more vulnerable.

The war planners are also troubled that if one of the Troop Contributing Countries (TCCs) marches out its troops, it could spark panic and a stampede by others to leave, plunging Somalia back into firm al-Shabaab grip.

These concerns have gained urgency in the past few days after the October 14 bomb blast on KM4 Street in the capital Mogadishu, the worst terror attack in the country, that killed 358 people and injured hundreds more.

Whereas civilians responded with demonstrations against al-Shabaab, Somali government officials, international actors and Amisom decision-makers began investigating whether the attack was a result of intelligence failure, collusion, evidence of new terrorist actors on the scene or the beginning of the insurgents’ renewed and more aggressive comeback.

Because the explosives used and the scale of destruction in the latest attack was beyond anything seen there before, and the capability of al-Shabaab, one senior security official, who spoke on condition of anonymity, said extremists displaced from the Middle East may have infiltrated the Horn of Africa. 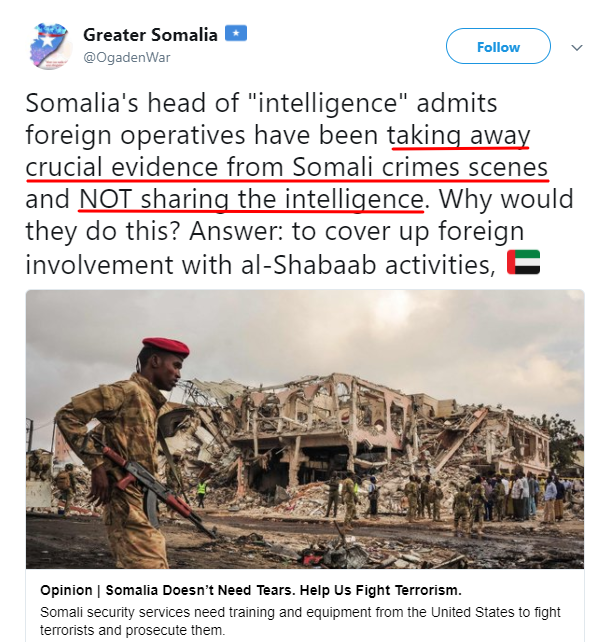 This deteriorating security situation coupled with suspicions of external involvement prompted the Somali President Mohammed Abdullahi to fly to Kampala for emergency talks with President Museveni.

The two leaders met on Sunday at State House Nakasero in Kampala. President Museveni sent away ministers from the meeting and a photo that State House released afterwards captured senior military, intelligence and Defence ministry officials in attendance.

One source suggested that the exclusion of politicians means the Ugandan leader was likely weighing a military, rather than diplomatic, solution to the Somalia crisis.

The sensitivity of the discussion and the need to withhold rather than publicly share the information was manifest in a State House press statement. “President Museveni and his Somali counterpart, Mohammed Abdullahi, have held bilateral talks on matters of mutual interest affecting both countries,” the statement read in part, offering no detail. 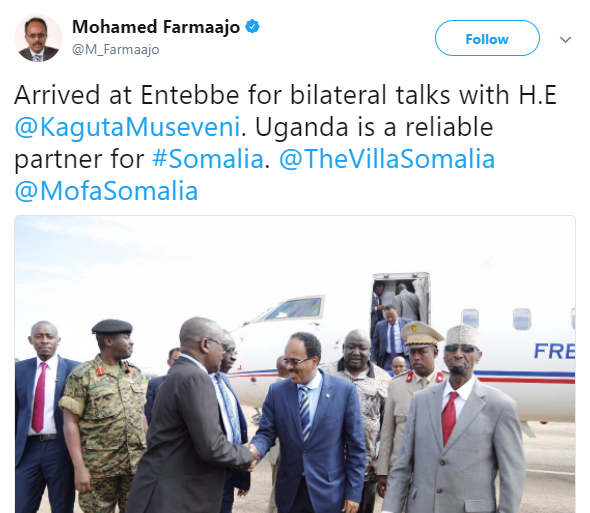 Our investigations show that the discussion in Kampala on the Somalia meltdown was premised on decisions reached in meetings more than a month ago between African leaders and US President Trump on the one hand, and on the other, among leaders of Troop Contributing Countries (TCCs).

President Museveni and leaders of Ivory Coast, Guinea, Nigeria, Ghana, South Africa and Namibia attended the meeting with President Trump on the sidelines of the UN General Assembly in New York in September.

Ethiopia, Somalia’s neighbour, which in October 2016 withdrew its troops that could not be re-hatted under Amisom, citing lack of financing, was invited but sent no representative.

However, Ethiopia maintained there about 4,500 troops that Amisom absorbed.

In the New York meeting, President Museveni praised President Trump as a fresh breath in American politics because he does not lecture African leaders on homosexuality, and instead focuses on practical peace and security challenges and defeating terrorism.

The African leaders raised concern over US government’s planned funding cut to the UN and implored Trump’s administration not to touch the budget of the world body’s peace-keeping operations.

They also proposed that instead of Amisom costs being met through a UN Trust, it should get funding directly from the UN budget like is the case for other peacekeeping operations. Washington’s specific response is still pending.

“The United States is proud to work with you to eradicate terrorist safe havens,” Reuters quoted Mr Trump having told the African leaders, adding: “And a number of you have told me … that we’ve been doing a very good job over the last six or seven months in particular.”

Top US diplomat flies in

This week, Mr Trump deployed Ms Nikki Haley, the US permanent representative to the UN, to Ethiopia, South Sudan and the Democratic Republic of Congo to assess firsthand the insecurity hotspots and the work of UN peacekeepers on the continent.

She, however, will not visit Uganda that African leaders assigned as spokesperson and coordinator on AMISOM issues with the international community.

President Museveni chaired the September 21, 2017 meeting in New York at the Uganda House, adjacent to the UN headquarters, which gave him and Uganda a lead role.

“The meeting was successful and they have given Uganda the mandate to coordinate Troop Contributing Countries,” said Ambassador Adonia Ayebare, Uganda’s permanent representative to the UN.

“I will be working with my colleague diplomats at the UN missions to implement the mandate,” he added.

They discussed Somalia’s security situation, negative influence of some Middle East actors to undermine the Mogadishu government through direct deals with provincial governors and leaders.

In a communiqué after the summit, they “called on external countries to refrain from disruptive interference into Somalia’s internal affairs.”

They asked the UN to clarify its position on funding and equipment request. This response, highly-placed sources say, will inform next month’s planned TCC meeting and whether or not they will pull their troops out of Somalia altogether.

Even when final decisions on many critical issues remain outstanding, America’s top diplomat for Africa has said they see the continent as a strategic convergence point for the world. 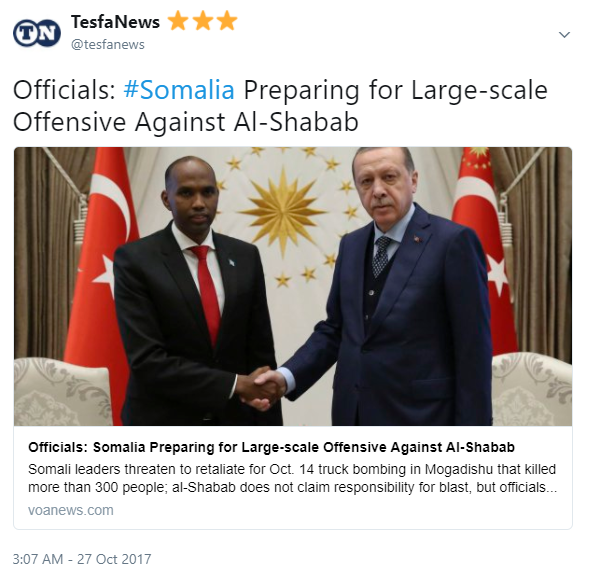 Those priority areas all find expression in Somali where competition for business and influence have politicised the country’s fragile security. President Abdullahi’s new government, eager to disprove critics and skeptics, wants to show it can assert territorial authority.

The government, highly placed officials said, has been pushing Ugandan and Burundian troops to surrender key locations, among them the Mogadishu stadium, to its forces.

Already, the Burundian troops have withdrawn from the Somalia National University campus in Dharkenley district, west of Mogadishu. The troops had camped at the university for 10 years, but have now relocated to Jowhar.

The UPDF is leaving the stadium which it captured in 2011 in one of its fiercest battles before pushing the al-Shabaab out of the capital.

According to sources, the withdrawal of Ugandan soldiers from the stadium is likely to expose UPDF soldiers stationed at Parliament to the enemy.

In Kampala, Brig Richard Karemire, Uganda’s defence and army spokesperson, said: “The stadium is needed by [Somali] government to have it rehabilitated. They have been communicating to us for some time.”

He, however, allayed fears that vacating the stadium would endanger Ugandan soldiers at the Parliament.

“No, it wouldn’t expose them. We shall go to another place that gives us physical advantage to continue with our deployment,” Brig Karemire said. UPDF guards key government installations like Parliament, presidential palace, seaport and airport.

Logistical blues: Outside Mogadishu, it is becoming increasingly difficult for AMISOM to go on the offensive for fear of outstretching troops amid lack of fighting vehicles and frustrating bureaucracy.

Resurgent enemy: Thin troop presence on the ground is counter-productive, and by some accounts, exposed UPDF to deadly attacks in Janaale in 2015 and in Lower Shabelle, where 12 soldiers were recently killed. These ambushes prompted AMISOM to withdraw from some areas to consolidate its defensive positions. Al-Shabaab, unfortunately, took control of the towns. A similar thing happened on August 4 when AU troops vacated Lego. The al-Shabaab took over the base. There is also delayed payments for soldiers, for instance those deployed in Mogadishu early this year, have not been paid.

Weak Somali army: With limited capacity of troops, it’s increasingly becoming difficult to augment Somali National Army. On the August 31, the Somali army and AU troops captured Barire town. After the capture, SNA was left in charge of the base, but days after al-Shabaab attacked and recaptured the town and took a big cache of weapons.