Removing the rust from U.S. policy means disentanglement from partnering with African dictators

Trump has been accused of ignoring and neglecting Africa. He has been criticized for “having Africa last in his first budget,” and the prophets of doom and gloom predict his “slash-and-burn cuts to the State Department and USAID would deepen the worst humanitarian crises since World War II.” Some have even suggested that aid cutbacks by the Trump administration could drive Africa’s unemployed youth into the hands of terrorists.

Trump has expressed “overall skepticism about the value of foreign aid, and even about American security interests, on the world’s second-largest continent.” And there is in fact substantial evidence that aid “from the rich countries has trapped many African nations in a cycle of corruption, slower economic growth and poverty.”

Additional “evidence” of Trump’s neglect and indifference towards Africa include his “ignorance” of the continent, his selective communication with only a couple of African leaders, his demands for accountability in U.S. Africa policy, the aborted appointment of Rudolph Atallah “best known for his work on East Africa and counter-terrorism issues” as National Security Council Africa director, his nonchalance in filling vacancies for assistant secretary and principal deputy assistant secretary for African affairs at the State Department and his general failure to promote human rights in Africa and elsewhere.

The inference to be drawn from all of the criticism is that the Trump administration simply fails “to realize the importance of Africa to U.S. national security interests, and America’s indispensable role in continuing to shape the democratic evolution of the continent,” and is callously turning its back on “more than 20 million people facing starvation and famine” in Africa. The solution, apparently, is for Trump to appoint “moderate and experienced Africa experts” and old hands who perambulate through the revolving door of government, think tanks and consultancies. 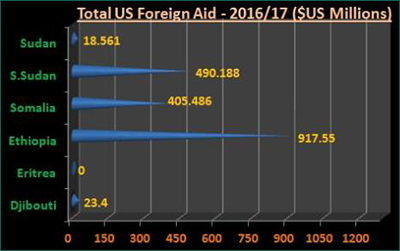 Ultimately, the criticisms of Trump on his (lack of) Africa policy are dubious, deceptive and self-serving.

It is ironic that those who are criticizing Trump on Africa today seemed to have taken a vow of silence when Barack Obama befriended and wined and dined the most ruthless African dictators and overlooked their deplorable human rights and corruption records in the name of counter-terrorism cooperation. Few Trump critics today spoke out when Obama shamelessly called the regime in Ethiopia, which claimed to have won 100 percent of the seats in parliament in 2015, “democratically elected.” That regime today rules by a draconian state of emergency decree.

Trump has made his foreign policy position crystal clear. It is “America First.” In April he declared, “It’s time to shake the rust off America’s foreign policy” and “invite new voices and new visions into the fold.” He said he will follow a “foreign policy (that) will always put the interests of the American people and American security above all else.”

In his official “remarks” to State Department employees in May, Secretary Tillerson said, “our overarching strategic approach” will be to determine our allies and partners on a country-by-country and region-by-region basis. He also declared that U.S. foreign policy will be propelled by “our fundamental values: our values around freedom, human dignity, and the way people are treated.”

In Africa, removing the “rust” from U.S. policy means disentanglement from partnership with African dictators because continuing with business as usual with them will not enhance American security; it only creates an untenable moral hazard.

The concept of “moral hazard” signifies a situation in which a government is insulated and immunized from the consequences of its negligent, reckless and incompetent behavior. African regimes heavily dependent on the safety net of American development and humanitarian aid, sustained infusion of multilateral loans will behave differently if they were left to their own devices to deal with the consequences of their mismanagement of their economies, tolerance of crippling corruption, chronic budget and food deficits, mushrooming poverty and unemployment and bad governance and face the wrath and fury of their citizens.

The moral hazard in U.S. policy in Africa comes also from the rewards of increasing amounts of aid and loans to buffer African dictatorships from a tsunami of democratic popular uprisings.

Many African regimes today avoid the demands of good governance, ignore the rule of law and commit gross violations of human rights in the belief that American taxpayer handouts will be there to bail them out. Since the 1960s, American taxpayers have provided over one trillion dollars which have served to sustain failed or failing African regimes.

There is substantial evidence showing that most African leaders are only interested in clinging to power cushioned by the financial support of American and other Western taxpayers. They are not interested in engaging America on what matters most to Americans — democracy, freedom, human rights, the rule of law, accountability, transparency and the like. More democracy and greater respect for human rights necessarily means less famine and starvation and accelerated development because a government that is not able, willing and ready to feed its people or effectively address poverty will be swept out of office by a hungry and angry electorate.

Trump needs to take a fresh start by first taking out the moral hazard in U.S. policy in Africa and by “inviting new voices and visions” on how to wean Africa from aid addiction.

Trump should adopt a policy that facilitates partnership with the African people, not their dictators in the name of counter-terrorism.

Ultimately, American handouts and loans will not save Africa. Only Africans can save themselves.

The best way Trump can help Africa is by ending the insidious culture of competitive panhandling on the continent and ensuring that American national security and tax dollars are not entangled with the toils of African dictatorships.

Alemayehu (Al) Mariam is a professor of political science at California State University, San Bernardino, a constitutional lawyer and senior editor of the International Journal of Ethiopian Studies.