The Strength of Yonas at the Tour for the Truth, Peace, Justice and Eritrea

I MET Yonas in Frankfurt when the Tour for the Truth, Peace, Justice and Eritrea had arrived to the middle of its course, which started in Gothenburg and will end in Geneva.

When I shook his hand, I noticed the black gloves he was wearing to hide the showy calluses whilst he continued smiling.

I could not believe that I could ever find such a joyful smile on the face of a disabled person and it was just that smile of him that pushed me to ask: “Why did you join the Tour pushing your wheelchair behind the cyclists?”

“I wanted to symbolically participate in at least one stage of the Tour just so I could feel that I was part of it too, but seeing the many mothers crying and hearing their support, I was really encouraged to continue” said Yonas, now touched.

As a matter of fact, the Eritrean women who were waiting for the cyclists in Frankfurt were surprised to see him arrive in a wheelchair pushed only by the force of his arms. It was they, crying and promising to support him even materially, that encouraged him to continue towards Geneva. The emotion was strong even among the cyclists in Frankfurt, who driven by the strength of this young man in a wheelchair would have even reached the top of the world.

Yonas willingly accepted, once again ready to give everything he could to his dear Eritrea.

Yonas Haile Zerai was only sixteen when he joined the Eritrean People’s Liberation Front (EPLF) in 1990, returning back safe to Asmara a year later with all the freedom fighters who had survived the war. 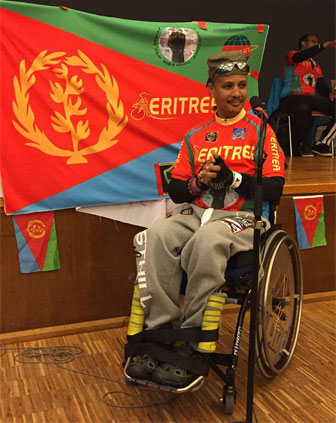 Colonel Mengistu Hailemariam fled abroad and in 1993 Eritrea finally became legally independent, becoming the 182nd country to be recognized. Five years of relative peace and war broke out again in 1998 and Yonas was called to fight in a war that sadly caused many young victims on both fronts. And in 2000 just before the armistice, Yonas lost the use of his legs during a battle.

For fifteen years Yonas has been using a wheelchair, even though he has never stopped treating everybody that he meets with a smile.

The Tour for the Truth, Peace, Justice and Eritrea is an initiative of the large community of Eritreans living abroad who want to reiterate the respect of the final and binding decisions already adopted by the United Nations and that Ethiopia deliberately ignores continuing the illegal occupation of Eritrean territories.

Yonas does not experience feelings of hatred or revenge against Ethiopia or its people, like many other Eritreans he just wanted the truth, peace and justice are finally guaranteed. Nothing but the truth, peace and justice for Eritrea. His sweat, like that of all the other cyclists who have already covered more than 1200 km of road, wants to testify and carry a message of peace and legality, not surprisingly the event logo depicts a dove and a scale.

Yonas, shy but determined, says: “I will fight until death to see the sovereignty of my country protected. I fought for it, and I lost my legs and if necessary I am ready to go as far as the United Nations Headquarters in New York. ”