Ethiopia Not Expected to Graduate from Poverty by 2025: UNCTAD

(Addis Fortune) – A new report from United Nations Conference on Trade and Development (UNCTAD) dampens Ethiopia’s prospect of becoming a middle income country by 2025. Despite impressive economic growth in the past decade and a recent positive report from the World Bank, Ethiopia is not expected to graduate from the Least Developed Countries (LDC) group by 2025.

The report titled, “The Least Developed Countries Report 2016”, uses three criteria to predict countries making improvement to graduate from LDCs. The criteria include per-capita income, human assets and economic vulnerability. Per-capita income, based on a three-year average estimate of the gross national income (GNI) per capita, with a threshold of $1,035 for possible cases of addition to the list, and a threshold of $1,242 for cases of graduation from LDC status. Ethiopia’s GNI per capita is $590 as of 2015.

Ethiopia scored poorly in Economic Vulnerability Index which measures the stability of its economy. Ethiopia suffers from instability of agricultural production which its economy heavily depends on. Other criteria is Human Assets Index which measures on indicators like percentage of undernourished population, health, school enrollment and adult literacy rate. Ethiopia ranks 174 in Human Development (HDI).

The report also adds being landlocked presents many LDCs with additional challenges that are a greater obstacle to graduation. The landlocked developing countries (LLDCs) among the LDCs generally perform considerably less well than other LDCs, reflecting their more limited export diversification and productive capacities, lack of export competitiveness, economic remoteness and dependence on the economic and political situations of neighbouring (transit) countries.

(VOA News) – Somalia’s political leaders on Tuesday called on aid agencies, the international community and donor countries to respond to what they described as “a very alarming drought situation.”

During an emergency meeting in Mogadishu, Somali President Hassan Sheikh Mohamud said the drought situation in Somalia in some areas has turned into a “famine.”

At the end of the meeting, the leaders appointed a new National Drought Committee.

More than a quarter of a million people died in the famine in Somalia between October 2010 and April 2012.

Somali Government officials at the time accused the international community for not acting quickly enough to save lives. (>> Read more …)

(Al-Araby) – The United States on Monday stepped up its drive to impose an arms embargo on South Sudan, pushing ahead with plans for a vote at the Security Council on the proposed ban.

US Ambassador Samantha Power made the case for cutting off the weapons flow to the war-torn country during a council meeting, arguing that all sides were mobilising for more fighting and that action was needed to prevent mass atrocities.

“The situation is not getting better, but worse, and we are sitting on our hands,” Power told the council. “Large-scale attacks could start at any moment.”

The United States last month presented a draft resolution on imposing an arms embargo following UN warnings that the war-torn country could descend into genocide.

The United States will request a vote on the arms embargo before the end of the year, Power said.

UN Secretary General Ban Ki-moon backed the US call to ban arms deals with South Sudan, saying an embargo would reduce the capacity of all sides to wage war.

“If we fail to act, South Sudan will be on a trajectory towards mass atrocities,” said Ban. (>> Read more …)

Time is past for an arms embargo & sanctions against those stoking ethnic violence in #SouthSudan: https://t.co/bbYuFTu7hv 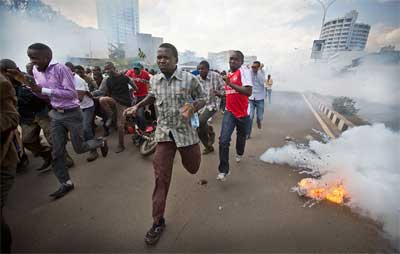 (VOA News) – Tensions around next year’s presidential poll are heating up in Kenya. A special sitting of parliament to debate changes to the electoral law ended with a fist fight on the House floor.

With fewer than eight months until the general election, Kenyan politicians are wrangling over how the electoral commission should carry out the process.

In September, members of parliament from both sides of the political divide passed electoral reforms, following weeks of protests demanding the electoral commissioners step down. The commission was accused of favoring the ruling Jubilee coalition administration.

On Tuesday, a special session of parliament met to debate proposed amendments to the reforms. The opposition said the amendments were proposed by, and favor, the ruling Jubilee coalition

Opposition legislators began the session by blocking the speaker from accessing the House chamber for more than two hours.

Justice and Legal Affairs Committee Chairman Samuel Chepkonga said the amendments were requested by the electoral commission itself. (>> Read more …)

(Associated Press) – Ethiopia on Saturday (17) officially opened the Gibe 3 hydroelectric dam, which is among the biggest in Africa, despite concerns by environmentalists about its impact downstream and upon neighboring countries.

Ethiopia aims to produce 15,000 megawatts of electricity through its dams in the coming five years, Prime Minister Hailemariam Desalegn said at a ceremony launching the Gibe 3 dam.

Officials said Gibe 3 makes Ethiopia one of the biggest producers and consumers of renewable energy in Africa. They said the massive dam will help Ethiopia meet its own and neighboring countries’ increasing demands for cheap, renewable electricity.

The Gibe 3 dam cost $1.7 billion to build, with 40 percent of that covered by the Ethiopian government while the remaining 60 percent was obtained through a loan from the Chinese government, officials said.

Gibe 3 is part of the Ethiopian government’s efforts to build a series of dams on the Omo River, which runs into Lake Turkana in Kenya. Environmentalists say the dams could lead to livelihood losses and increased local conflicts. (>> Read more …)