AFTER pulling on the King of the Mountains leaders’ jersey at the end of yesterday’s opening Criterium du Dauphine stage, Daniel Teklehaimanot would find the break of the day again on today’s 2nd stage and he would extend his lead in the polka dot jersey competition.

With the stage starting immediately on a category 2 climb, it was another good opportunity for Daniel to collect a few more points towards the polka dot jersey. Daniel made his move from the gun and there would be two riders that would follow him. Perrig Quemeneur (Europcar) and Arnaud Courteille (FDJ.fr) would accompany our Eritrean rider.

Daniel would take maximum points at the top of the climb with the 2 Frenchman in tow. The peloton allowed the 3 attackers to establish a gap rather quickly as the gap was already at 1’50” at the first summit. It would grow to a maximum of 6’45” before the sprinters teams assumed control of the peloton. There was still a category 1 climb to contend with that topped out after 75km of racing before the mostly downhill to flat run to the line began.

Daniel had no trouble in securing maximum points at the top of the Col del Culvery to take his mountain points tally to 25. Quemeneur moved to 2nd in the competition with 11 points. From the top of the climb though, the peloton had turned on the chase switch, particularly riders from Cofidis and Lampre-Merida. It was always going to be tough for the trio to outwit a hungry peloton but they were able to push the chasing pack right up to the 3km to go board before surrendering.

MTN-Qhubeka p/b Samsung were then able to play its sprint card once again and lined up perfectly for the sprint finale. Tyler Farrar led the race under the flamme rouge before Reinardt Janse van Rensburg took over. Reinie dropped Edvald Boasson Hagen off with around 300m to go. It was a near on perfect leadout that saw our Norwegian star lead the way to within 50m of the line.

Nacer Bouhanni (Cofidis) would just have too much finishing speed as he came over Eddy to take the stage win. You could have thrown a blanket over positions 2 – 6 and in the end it was Samuel Dumoulin (AG2R La Mondiale) 2nd, Sacha Modolo (Lampre-Merida) 3rd and Edvald in 4th place.

It was another good day for our team as I could get some more points for the jersey and Edvald was close to the win again. With the early climb it was a good chance for me to get some more points and luckily we got away quite quickly. It was a hard day with only 3 riders in the break but we rode well. After the last climb we tried as hard as we could but we were caught at 3km. I am happy to still be in the jersey and that I was able to show off our team again.

It was another absolutely super day. The guys did a near perfect leadout and we were right up there so it is only a question of fine tuning now but we are not in a place of nowhere, we are really competing for the win. 50m before the finish Edvald was still leading before he was passed by Bouhanni. He was also very close to 2nd and 3rd. What was very important for us was that Daniel defended the climber’s jersey. He has 25 points now which is already a nice lead and of course we are going for the jersey so we will continue to ride offensively. The riders are in good shape, they have good morale so the team is going really well. 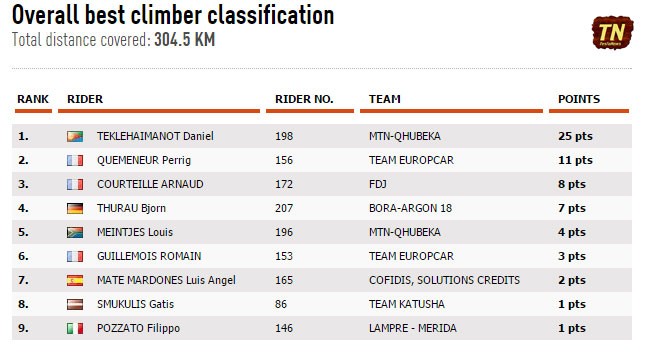