STAGE 17 of the Tour de France would be another excellent day for Team MTN-Qhubeka p/b Samsung, as our African team consolidated its 2nd place in the team ranking overall by having 3 riders finish in the top 15 on the stage. Simon Geschke (Giant-Alpecin) was the rider who won the stage.

With a large break of 28 riders going clear today, MTN-Qhubeka p/b Samsung had three riders placed in the big move of the day. Serge Pauwels, Daniel Teklehaimanot and Merhawi Kudus were the three riders on the attack. It would be a tough first stage in the Alps with 5 categorised climbs on the menu.

The real action began when the lead group started attacking each other with 50km to go. Geschke would eventually get away alone and he was being chased by Daniel on the lower slopes cat 1 Col d’ Allos. A few more attacks from the chasers, which were all marked by Serge and Merhawi, saw Daniel being caught. Near the summit of the penultimate climb, Thibaut Pinot (FDJ) put in a stinging attack that broke the chase group apart.

There was a rather treacherous descent to the final 6km climb with Pinot even hitting the tarmac. Geschke though, started the final climb with a 1’51” lead over his nearest chaser and it was enough to solo to victory at the top of the climb. Serge was our first rider across the line in 9th place, while Daniel and Merhawi finished in 12th and 14th respectively. It was a superb performance that saw our team finishing as the best team on the stage once again, pulling back 3’53” on Movistar who lead the team standings. Another significant result was that Serge moved up to 15th place on the general classification.

There was also another race on within the stage today for our young climbing sensation, Louis Meintjes, who was fighting to finish within the time cut. Louis started the stage after falling ill overnight, with stomach problems severely affecting the young rider. Louis would spend the majority of the race alone and well off the pace. Eventually, with just 3 minutes to spare before the time cut, Louis crossed the line.

I wasn’t really planning to go in the breakaway today because I thought it might be a stage for the GC riders. When I saw there were a lot of riders attacking and going up the road early on I thought I better get involved. We also had Daniel and Merhawi up there so it was a good breakaway for us. I was also able to make up some time for the GC so it was another good day out for us.

Once again it was another amazing result for our team today. It has now been 3 days in a row that we have won the best team stage classification. Serge was again very good and also Merhawi and Daniel, they were all very strong. The team are fantastic and we are really happy right now. 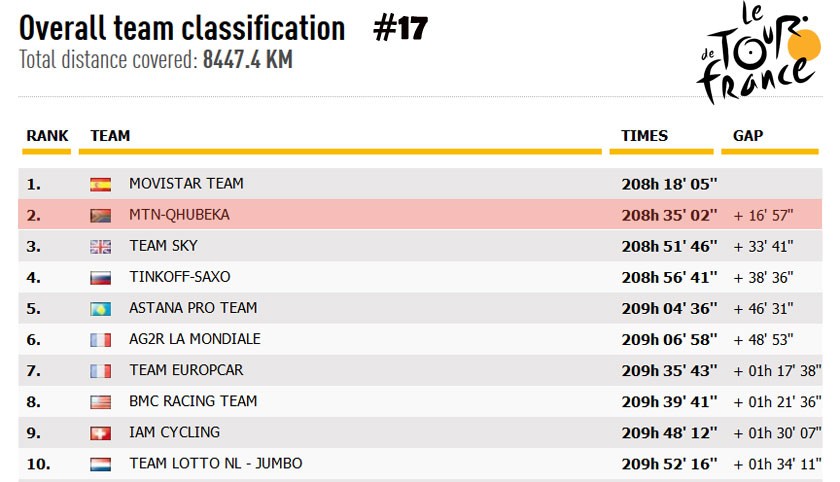