Statistics of the Ministry of Agriculture show that 30% of Eritrean land used to be covered by forest a century ago. Due to successive wars, frequent drought and other factors those thick forests were reduced to 1% coverage over the years.

In order to restore the natural vegetation the government of Eritrea launched summer work programs (Maetot) in 1994, in which students are deployed in different parts of the country to participate in afforestation activities that include planting trees and water and soil conservation.

The summer work program has engaged vast amount of human resources and around 2.3 million [?] Nakfa over the past 22 years.

Maetot or the summer work campaign brings together individuals with various cultures, and backgrounds allowing them to share their own respective values and experiences as citizens. One goal of the summer work program is to provide good environment for the youth so that they can apply the theories they have learned in their classes and to instill a working habit.

Reports indicate that the students’ campaign for development is registering a satisfactory result in the nation, particularly in the Maekel region. Areas covering Serejqa to Adi Akelom are a living example of the green developments, finely transformed by students.

In the sub-zone of Berik, an area named Dem Seb’ay surrounding the villages of Tseazega, Adi Bidel, Adi Yaqob, Hazega and Adi Qonxi has a length of 6.8 km which was a bare land before is now a complete striking green landmark, thanks to the summer campaigns persistently followed to date.

Along with this, between the years of 1994 and 2016, 19 million holes were dug, 23 million seedlings planted and 17 thousand km of terraces made.

All in all, the summer work program has passed through three stages. In the first stage, 1994- 1999, students worked outside their region. In the second, 2000- 2005, students were assigned to work within their region. Since students had to move to working areas, food and accommodation were fully provided by the government.

An analysis of the past campaigns showed that moving and working out of the students’ regions were not cost effective. Therefore, since 2007, students have been assigned to work in their own towns and regions. Thus, the students are now able to conduct personal activities while still doing Maetot.

Mr. Abraham Berhe, head of student summer work program, said that the program is carried out in an organized way in collaboration with the Ministries of education and Agriculture, the National Union of Eritrea Youth and Students (NUEYS) and the Commission of Culture and Sports. He also added that the student summer work program aims to boost students’ work habits so that they can do well in their future careers. 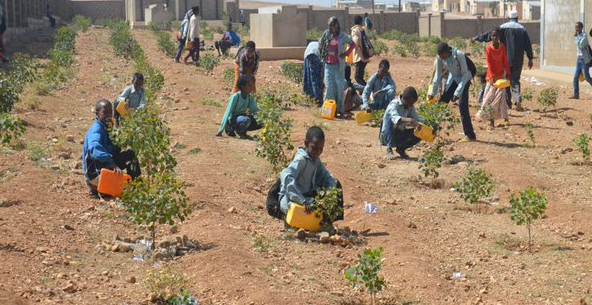 In 2017, the summer work program started on 4th July and successfully ended on 4th August, with around 8000 student participants.

Mr. Abraham further said that even though there wasn’t enough rain, a lot of work has been completed by the students in 54 stations in the span of one month. This year the main agenda of the summer work program was focusing on conservation of water and soil, including terracing and sanitation activities in hospitals and maintenance of schools. 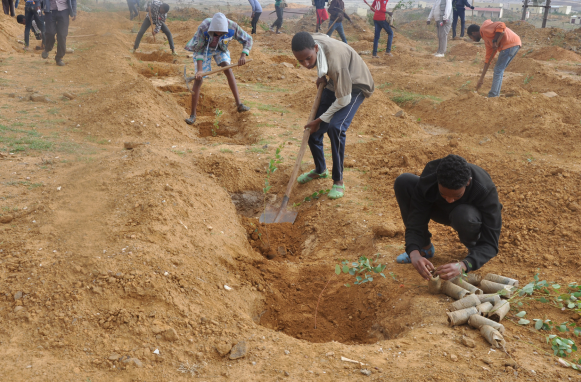 As Mr. Abraham said this year 6.9 km long all-weather road has been modified, 190 thousand holes dug, 28 thousand trees planted and 254.4 km terraces have been made.

He also added that the summer work program is conducting its activities jointly with National Union of Eritrean Women (NUEW) so as to make the program inclusive and to increase the awareness of people across the country.

In addition to this, NUEW arranged various incentives to relax students by touring and visiting the stations over the regions.

Mr. Abraham finally said that, with some challenges, the program is so far as good as the previous years and he looks forward to making the country greener.