The Sudanese and Ethiopian armies Thursday signed an agreement to withdraw troops from both sides of the border and to deploy joint forces to combat “terrorism”, human trafficking and to eliminate any potential security tensions.

Although Khartoum and Addis Ababa have close ties, the border area between the two countries remains a source of tension and violence between the two sides due to the human trafficking and smuggling to reach Egypt and Libya.

Also, Ethiopian farmers are accused by the Sudanese farmers of occupying vast agricultural land in the Al-Fashqa area of Gedaref State.

The third issue until recently was Ethiopian rebels who sneak over the border coming from Eritrea. Many have been detained and handed over to the Ethiopian authorities.

The chief of staff of the two countries held an extraordinary meeting of the Joint Sudanese-Ethiopian Military Commission in Khartoum on Thursday after an expert meeting on Wednesday.

According to a statement released after the meeting, the two sides agreed to withdraw troops from the border in conjunction with the formation and deployment of joint forces before next December.

Further, it was agreed that a protocol of the joint forces will be signed in the next meetings of the Commission next October.

The statement, seen by Sudan Tribune, also provided that the competent authorities should accelerate the completion of border demarcation on the ground as a step towards tackling problems, as well as addressing the situation of farmers from both countries and returning property in coordination with the governments of neighbouring states and territories.

The two sides agreed that the competent authorities should accelerate the completion of the border demarcation, and to address the situation of farmers from the two countries and return their property in coordination with the governments of the neighbouring states and regions. 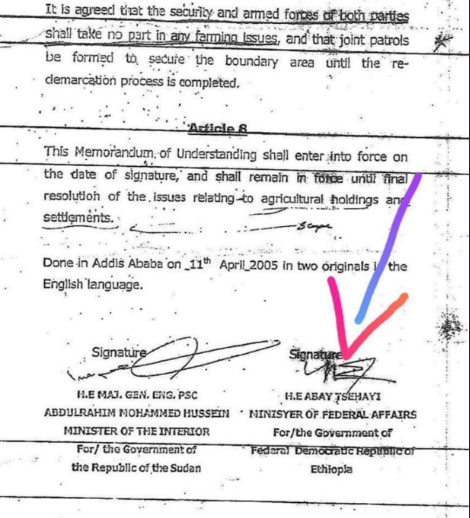 In October 2017, the security committee between Sudan’s Gedaref state and Ethiopia’s Amhara region decided to recommend to the leadership of the two countries to deploy joint forces along the border.

For his part, The chief of staff of Ethiopia National Defence Forces (ENDF), Se’Are Mekonen, said Sudan and Ethiopia had cooperated in the past to protect the common border, adding that the joint forces would be deployed along the two countries’ borders according to the agreement and would work together to combat security threats and prevent all negative activities on the border.

Mekonen who is from the Tigray region like the former chief of staff Samora Muhammad Yunis has been appointed last June by Prime Minister Abiy Ahmed. Previously he led the ENDF’s Northern Command which covers the border with Eritrea.

Deputy Prime Minister Demeke Mekonnen was accused of giving away Ethiopia’s Amhara land to Sudan while being the deputy president for Amhara region. However, a written evidence obtained by ESAT rather suggests that TPLF top official and the then Minister of Federal Affairs Abay Tsehaye was the one who authorized the giveaway.