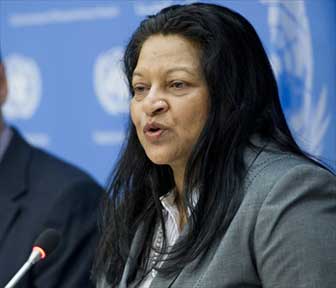 After watching Friday’s bizarre question and answer session with Special Rapporteur Ms. Sheila Keetharuth, I am obliged to call out her deceptive response to an explicit question from the Inner City Press journalist, Mr. Mathew Russel Lee.

For the record, the session was arranged following Ms. Keetharuth’s oral presentation to the UN Assembly’s 3rd Committee on Thursday. The video posted online shows that the entire Q & A session lasted about 20 minutes with only two (2) journalists in attendance.

Lastly, only Mr. Lee of Inner City Press asked her pertinent questions – the most poignant of questions to be exact, enabling us to learn quite a bit about her attitude and understanding towards the role of a Special Rapporteur; economic sanction in relation to human rights; as well as, procedures of fact finding investigation, especially dealing with the views of the so called the “other side.”

This short piece focuses on the question she was asked directly as to why she “did not listen” to the views of the “other side”, the thousands of Eritreans in-and-outside of the country who wrote letters, emailed documents, and submitted petitions with over 700 thousand signatures to the commission.

Ms. Keetharuth responded to the question in unambiguous terms that the commission “is open to everyone who would like to engage in a constructive manner” (check video: 2:55 – 3:00 minutes).

Moreover, she stated that she does “encourage contact with the mandate [or her office]” and she always “respond[s], if not personally, somebody does respond on [her] behalf” (check video: 3:05 – 3:13 minutes).

Ms. Keetharuth claims are false, to say the least. This is because I personally contacted the ‘mandate’ or the commission on Sep. 9, 2016, through their official email address ([email protected]) and I received an automated reply in no time, stating that the commission’s email account is actually “no longer monitored”.

What’s even more bizarre is that the message says they will be “returning” on the last day of year 2099 🙄 . At any rate, my experience was consistent with what others have reported three months earlier.

On Sep. 9, 2016, I emailed a short and simple question to the commission. I wanted to know if the commission was still accepting relevant information from Eritreans, as their website continues to suggest. The response I received was also short and simple: that they are NOT in-fact “open to everyone who would like to engage in constructive manner.”

The Commission’s website is clear as to how one can communicate or send in relevant documents to them – i.e. via the official email. Yet this sole mechanism of communication is not “monitored.”

Clearly, Ms. Keetharuth response to Mr. Lee’s important question was a total lie – i.e. the mandate was never open to everyone and thereby the views of hundreds of thousands of Eritreans may have been purged.

My experience of course was just another modest evidence that Ms. Keetharuth never intended to listen to the views of all Eritreans and/or look at the facts related to human rights issues. What a shame!

Asked if she looked @ z impact of sanctions on HR,Sheila (who wants 2 c #Eritrea at Z #ICC) dismissively replies "I hve enough on my plate"