BOTH sides in South Sudan’s conflict have committed crimes against humanity, including mass killings, sexual slavery and gang-rape, a UN report says.

The “widespread and systematic” atrocities were carried out in homes, hospitals, mosques, churches and UN compounds, it added.

The report called for those responsible to be held accountable.

Fighting between government and rebel forces broke out in December, leaving more than a million homeless.

Mr Machar denied the allegation, but then marshalled a rebel army to fight the government.

The battle assumed ethnic overtones, with Mr Machar relying heavily on fighters from his Nuer ethnic group and Mr Kiir from his Dinka community.

The two leaders are due to meet on Friday – their first contact since the conflict erupted. 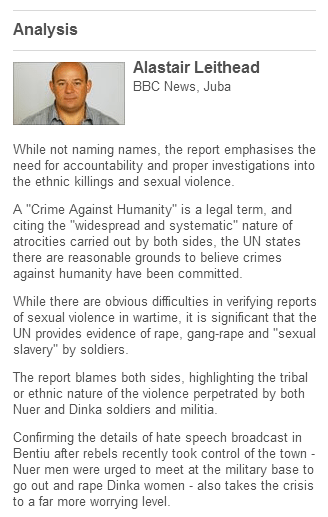 Mr Kiir and Mr Machar have come under intense diplomatic pressure from the UN and US to end the conflict.

Regional mediators have been trying to broker a peace deal between the two sides in the Ethiopian capital, Addis Ababa.

They agreed that a truce – described as “30 days of tranquillity” – would come into effect on Wednesday in an effort to re-establish an ineffective ceasefire deal that was signed in January.

The BBC’s Alastair Leithead in the capital, Juba, says the report by the UN mission in South Sudan is a hard-hitting catalogue of atrocities, based on interviews with 900 people.

It describes how, when the conflict erupted, security forces in Juba went from house to house rounding up and killing men from a particular ethnic group.

Tit-for-tat revenge attacks then spread across the country, the report says.

There is page after page outlining mass killings, rapes and gang-rapes and the targeting of civilians on ethnic grounds, our correspondent adds.

The UN has about 8,500 peacekeepers in South Sudan, which became the world’s newest state after seceding from Sudan in 2011.

However, they have struggled to contain the conflict, and the government has accused the UN mission of siding with the rebels.

It denies the allegation.