Somalia’s lower parliament has voted to nullify a port investment deal between DP World, Ethiopia and the autonomous region of Somaliland with a landslide 168 votes out of 170.

The agreement announced on March 1, would give landlocked Ethiopia a 19 percent stake in Somaliland’s Port of Berbera, which is being developed by DP World under a 30-year concession agreement.

The Somali parliament, therefore, asserted that “it is only the Federal Government of Somalia that can engage in international deals,” and that “all ports . . . in the country are national property.”

Furthermore, the parliament found that “the DP World company intentionally violated the sovereignty of Somalia, so is banned completely from operating in Somalia [Puntland and Somaliland included].”

“Any agreement signed with DP World is null and void since it opposes the constitution, the rule of foreign investment in Somalia, and other rules of the country,” reads the resolution.

“DP World openly violated the independence and unity of Somalia and so DP World is banned from Somalia,” it said.

DP World previously reached agreements with Somaliland over the Berbera and Bosaso ports but with this vote – both deals are “null and void.” If the Upper House reaches a similar decision the President will sign it into law.

After Somalia parliament quashed its alternative port development dream, foreign ministry of landlocked Ethiopia announced that his country will continue its reliance on Djibouti port as a gateway for all its import-export trade. 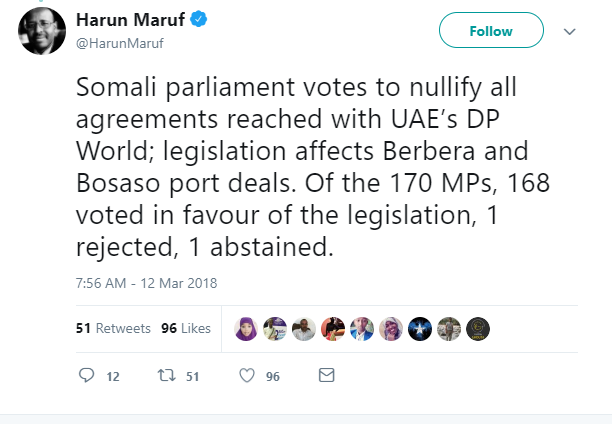