Somalia and Eritrean leaders agreed Saturday to resume their diplomatic ties and open embassies in their capitals. The decision was made during a summit in Asmara, Eritrea, where Somalia President Mohamed Abdullahi Farmajo began a historic three-day visit Saturday.

The two nations have not had diplomatic ties for nearly 15 years.

He said the leaders also discussed regional security and changing relations among Horn of Africa countries.

The region is of importance to the wealthy nations just across the Gulf of Aden and the Red Sea, who are interested in a strategic foothold in East Africa through its very busy shipping lanes.

The leaders are scheduled to continue talks Sunday.

Farmajo’s visit comes after longtime rivals Eritrea and Ethiopia restored diplomatic ties. The two nations have a long and complicated history, which has had a destabilizing influence on the Horn of Africa.

Ethiopia has accused Eritrea of supporting the terrorists. Over the years, this proxy war between the two countries has had the potential to spark a regional conflict.

The conflict between the two nations also spilled over into neighboring Djibouti. One of Ethiopia’s main economic allies, Djibouti has been engaged in a war with Eritrea over a border area claimed by both countries.

Ultimately, the prospect of peace between Ethiopia and Eritrea may have a calming effect on the Horn.

If stability is achieved, Ethiopia, a country with an estimated population of over 100 million, could realize its potential as a regional economic and military power. This could, in turn, transform the region into a united economic powerhouse. 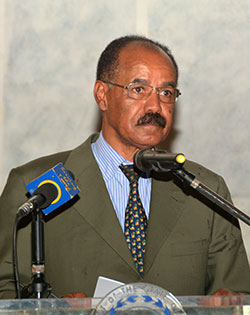 Your Excellency Mohammed Abdullahi Mohammed
President of the Federal Democratic Republic of Somalia,

I feel immense joy as I welcome – on behalf of the people and government of Eritrea – you, Mr. President, and your distinguished delegation to your home.

The historical ties between the peoples of Eritrea and Somalia are intertwined with the civilizations that flourished in the Horn of Africa; the southern part of the Arabian Peninsula; and, North Africa prior to the advent of Western colonialism in the region. Furthermore and after the onset of Western colonialism, the interaction and bondage of friendship and solidarity of our two peoples were reinforced through various phases and forms of resistance to domination.

In the Cold war period that ensued after decolonization, the solid ties between our two peoples reached its zenith to become the closest special relationship in the Horn of Africa. We are proud of this history. The respect of the people of Eritrea to the brotherly peoples of Somalia is indeed anchored on this profound historical appreciation.

We have learned a lot from the obstacles that were woven in the past decades after the end of the Cold War, as we all embarked – i.e. Somalia, Ethiopia, Eritrea and the Sudan – in earnestness on the path of nation-building and when it was deemed that there was conducive climate for strategic regional integration.

Cohesive nation building was eclipsed by ethnic and clan cleavages, and destruction; … economic development and prosperity were replaced by the scourges of poverty and hunger spurred by external pillage and internal thievery; … consolidation of independent and sovereign governments and institutions suffocated by micromanagement of anarchy through UN agencies and NGOs;… regional partnership and harmony supplanted by intractable border crises and strife; regional peace and stability based on internal resources and capabilities undermined by spiraling crises under the rubric of “peacekeeping” etc.  The list is long.

Under these bleak realities, interventionist and expansionist regional agendas in the name of religion; cultural intoxication under various extremist ideologies; terrorism; piracy; human trafficking, as well as trade in weapons and narcotics became the New Normal or “business as usual”.

This New Normal continues to be peddled and propagated, day-in and day out, through media outlets of lies and mendacity. The perplexing developments of the past quarter-century, which essentially stemmed from the misguided policies of powerful countries, would not have materialized without the harmful role and complicity of domestic surrogates.

But this epoch of crises, conflict, and instability is not inherently sustainable. As such, it is nearing its end. We are indeed entering a new, transitional, phase.

The people of Eritrea have demonstrated exceptional resilience to challenge and frustrate all forms of subversion directed at them. They have prevailed in spite of the transgressions and pressures to which they were subjected without let-up.

The people of Ethiopia have triumphed over the politics of ethnic polarization and foreign subservience. They are marching forward at a rapid pace for the crystallization and consolidation of a correct national and regional policy framework.

There is no doubt whatsoever that the people of Somalia will, as ever, be fellow travelers with the peoples of Ethiopia and Eritrea.

Let me re-affirm again my conviction on the decisive contribution of the Somali people in the crystallization of the lofty project that we are jointly working for.

In this respect, I wish you the best of success in your serious endeavors to overcome all obstacles and promote all-rounded bilateral and regional partnership in the economic and security fields.