At yesterday’s UCI World Road Championship, it was reported that Eritrean rider Merhawi Kudus finished in 21st place at the Men’s U23 ITT World Championship, only 1Min 42Sec shy off the winning time. Merhawi performed rather slow in the first quarter of the sector but the young athlete performance increased speed thereafter in each of the last three sectors quite sustainably in relative to the fellow athletes.

Frankly speaking, 21st place at a World ITT Championship is a huge result for an athlete who hasn’t even managed a podium place at a national ITT championship. This race against time saw over 50 athletes go off the starting ramp, where 8 of them were from Africa. Two each from Rwandan, South African, and Algeria while one each from Morocco and Eritrea took part in it. Merhawi finished head over shoulder above everyone of them.

Both of the South Africans (Dlamini and Van Niekerk), who finished 32nd and 37th, respectively, are actually the top two in the South African U23 National ITT championship while the third placed (Gustav) took part at the All African Games finishing silver medalist to the eventual champion, Meron Teshome. Annas of Morocco and Adil Barbari of Algeria, who are both based at the UCI World cycling Centre in Aigle, Switzerland, finished a further 41st and 46th, closely followed by Benaventure and Valens of Rwanda in 47th and 48th place, respectively. The Algerian Barbari was also the one who had been beaten by ITT Gold medalist Meron Teshome, despite Meron losing time after taking the wrong route and having to detour nervously at the 11th All African Games held last week in Brazzaville. Meron would have been the ideal selection for the world ITT but, unfortunately, is not illegible as he had turned 23 last july only two months before the start of the world championship.

Amanuel Ghebregziaber and another athlete from Macedonia are the only ones unable to start from the ramp for reasons of their bike not meeting the UCI rules and regulations. There are two possible UCI rules that Amanuel’s bike might have flouted: Either Article 1.3.013 or 1.3.014. 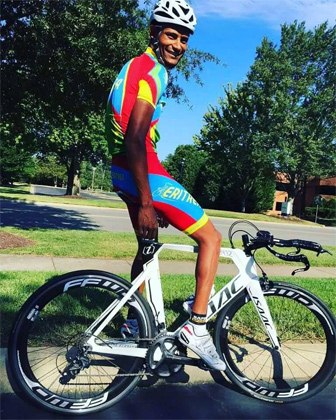 The general idea of Article 1.3.013 is that “The peak of the saddle shall be a minimum of 5 cm to the rear of a vertical plane passing through the bottom bracket spindle.”

The bracket Spindle being the centre of the crank and an imaginary diametrically vertical line across it and that line should less than 5cm. Period!

Where as Article 1.3.014 of UCI regulation might slightly affect 1.3.013 but it’s mainly regarding the maximum saddle’s inclination a rider can have, which should NOT exceed ±3° on either side. The authorities usually observe if a bike has visibly inclined saddle and if it does, then they would use an equipment equivalent to that of a spirit-level builders use to check the levelness of surfaces. The only difference is that the UCI tool can also determine the angle of the saddle’s inclination.

Both are technical issues that could have easily sorted in a matter of minutes as long as it’s done at least 15 minutes before the start the time trial so that the race commissars can have enough time to run a re-check on the bike. One only need a set of allen-keys to undo a couple of screws underneath the saddle and re-adjust the inclination to meet within the 3° limit and tighten the screws back again.

As for Article 1.3.24, which is not suspected to be the problem, is a simple formality to rectify it. Again loosen up the saddle bar and push the angled saddle down until the tip of the saddle is at a minimum 5cm from the diametrically vertical line running up from the centre of crank below.

Besides, had the issue been identified earlier, team Eritrea could have made an appeal for exceptional consideration in regard to the rule for “morphological reason” provided that the appeal is made at least two hours before the start. “Morphological reason” means the exceptional physical appearance or limbs of the athletes, particularly, if the athlete height is 190cm or more.

Exemption of one or the other would have allowed Amanuel saddle to remain outside the peak of the saddle allowed. I think Amanuel had a missed chance. He got his TT bike from his new team, CT2020, based in Belgium.

There is no information out there in the public domain of Amanuel’s exact height but he is clearly tall enough. We can only compare him with that of Daniel Teklehaimanot’s height who is 188cm tall. But the lanky athlete Amanuel appears to be even taller than Daniel and if he is indeed taller, at least, by 2cm, then Amanuel could have been illegible for the exceptional consideration of the rules. I think the lack of the knowledge of the rules compounded with the last minute panic might have caused so much stress.

Besides, Amanuel being slated to get released 4th down the ramp with the first batch probably wouldn’t allow the team to fix the anomalies in time before his turn. This rules are applicable only on World Tours, World championships and Olympic games but not necessarily applicable to other races including national or continental championships. The fact that Merhawi was scheduled to get released down the ramp with the third batch over an hour and half after that of Amanuel’s probably saved Merhawi’s day giving him the advantage of learning from Amanuel’s misfortunes. “Melebemi aygberkha, melebemi ayeklaka”.

However, Merhawi had a lot of experience doing a TT on world tours including at the La Vuelta and Le tour, so one assumes he is aware of the rules.

The other thing that was most perplexing was the fact that two better time trialists, Metkel Eyob and Yonas Tekeste, not being selected for the TT spot, instead of Amanuel, who is fourth in the pecking order from the available riders, according to the 2015 national ITT championship held last June in Asmara.

Amanuel is a tough and aggressive rider for road races. With the other three (Merhawi, Metkel and Yonas) better than Amanuel in terms of outputting more pedal power sustainably over a longer course, they are the ideal riders to protect Amanuel until the 10-20km for the last kill. But again, Metkel has that quality of taking on any sprinter including taking on three teammates in the break on his own and end up beating them all.

Besides, it is Metkel’s last chance in the U23 world championship this year and there is no doubt that the hardest job is to select the right rider and assign specific jobs to each and every rider over the 162km course. Whatever the decision, it has to be made as early as possible so that the coach and the riders can have enough time to plan the game quite meticulously.

Besides, for the first time in history of world championship, thanks to the new UCI president, Brian Cookson, UCI has cooked up a new championship medal for team classifications in Road races. The finishing times of three of the best placed riders from the same country will end up winning world championship medals for team classification. That way, we can afford to sacrifice only one of our riders for a team glory while going for top 10 finish in one or two.

In fact Mekseb is better off racing only on the 53km ITT course instead of racing the 254km Road Race course that is by far the most unfair race ever, where some countries will be fielding up to 14 riders while Rwanda and Eritrea are expected to slog it out with only one rider each. It’s like a boxer asking the referee to tie the hands of his opponent and then fight. Of course, the teams with many riders in them are expecting to control the race and even a team with only 6 riders like Algeria have no chance in hell over such a long race course, let alone Mekseb and Niyoshuti on their own racing for their respective countries.

What is even more bizarre decision by the corrupt UCI is the fact that cycling unknown Uganda is going to be fielding 4 riders in the elites road races. One couldn’t have made that up. How is it possible that we have continent’s great Road Race riders like Daniel Teklehaimanot, Natanel Berhane, Tesfom Okubamariam, and Meron Teshome, all unfairly left out in the cold while riders that had never existed in the cycling radar until today get not one, not two, not three but 4 world championship places. This must be one hell of a big joke.

Perhaps, the Ugandans are taking up the place of Moroccans, who also didn’t appear at the last All African Championship. But again, Eritrea is the next better placed country in the African ranking and should have been allocated the places. South Africa has 3 riders. A boycott of the world elite’s Road Race in protest against the unfair and unsportman-like acts by the UCI as well as the organisers would have been better. There is nothing that can be gained from such unfair race. Even the Algerians with 6 riders will find their riders struggling to finish let alone the Ugandans. I have a feeling that the Ugandans will be laughed off like “Erik the eel” of the Equatorial Guinea who was struggling to stay afloat at the Sidney Olympic that a life saver was about to dive innto save the poor man. Who would forget Djibo of Niger that competed in the singke Scull rowing in the last London Olympic. He earned a fame for being a laughing stock and names “Djibo the Sculling sloth”. Now the Ugandans are set to earn a name in the history of sporting laughing stock.

Mekseb for the ITT tomorrow

At 53km long, the ITT course is the longest ever in the history of the World championship. Considering the state of the arts gears and super aerodynamic machines used in the Elites ITT, even that would be an unfair game.

Skin suit, bikes, helmets, specialised pairs of spd shoes, the posturing techniques and pedaling styles and knowledge of phyiscs all matter. All those help the efficiently dodging the ever present wind resistance by streamlining it and helping it leave the body quite smoothly.

All these little things mean a difference between Gold medals and silver. That’s why it’s Elites’ sport. Every little factor add up to make a huge difference by helping conserve the watts output and save the time while sustaining the power output. Yet Mekseb can do a good job despite the circumstances.