A Look Back on Eritrea’s Historic 1993 Referendum

This week represents the 25th anniversary of the Eritrean referendum for independence. The three-day, internationally sponsored and observed plebiscite took place April 23-25, 1993, offering Eritreans residing in Eritrea, Ethiopia, Sudan, and in over 40 other countries including Canada, the US, across Europe, and parts of the Middle East, the opportunity to finally – and resoundingly – determine their future and exercise the rights that they had been denied for decades.

As expressed by the then US Assistant Secretary of State for African Affairs, Herman Cohen, and increasingly realized globally, “If [Eritreans] want to exercise the right of self-determination, there’s nobody who’s going to stop them.”

Officially, there were over 1.1 million registered eligible voters in the referendum, with the country’s multilingual, multicultural, and multi-religious character being represented. A highly impressive 98.5 percent turn out was recorded, including many in rural and remote desert areas.

Remarkably, 99.81 percent of Eritreans voted for independence from Ethiopia, an emphatic result that many international observers explained they would not have believed had they not witnessed the entire process firsthand.

The figures are even more striking when considered alongside those from the greater than 50 other independence referendums held around the world over the years: the average turnout and “YES” vote for independence is approximately 80 percent and 83 percent, respectively.

One memorable account of Eritrea’s electoral process by an international observer vividly describes how,

“during the polling, there was euphoria, more religious it appeared, than political. The polling stations we attended were decorated with lights, streamers, woven rugs, and flowers. One American observer claimed that the palms people waved were spread in his path as they entered the polling area. Popcorn was thrown and people clapped while the women went into a rhythmic dance. The high shrill ululating cheer of the women met us the moment we were sighted approaching for the inspection tour.” The observer goes on to describe how, “after voting overwhelmingly for independence, people danced in the streets of Asmara and other towns with flags flying and flowers waving. They were all smiles and welcomed us observers with applause and the traditional ululating shrill greeting of the women in this part of Africa” (Shepherd 1993: 84).

On April 27, 1993, several days after the votes had been cast and tallied, and as the provisional results were being shared, Isaias Afwerki, the then Secretary-General of the Eritrean People’s Liberation Front (EPLF) and the Provisional Government of Eritrea (PGE), announced, “Eritrea is a sovereign country as of today.”

Weeks later, independence would be formally declared on May 24, 1993, two years to the day after the EPLF had entered and taken control of Asmara, the Eritrean capital, which had been abandoned by retreating Ethiopian troops. 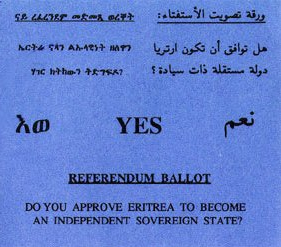 Subsequently, four days after formally announcing independence, Eritrea was admitted to the United Nations (UN) as its 182nd member by General Assembly Resolution 47/230 of May 28, 1993. As well, the country established permanent representation at the Organization of African Unity (OAU, now the African Union), joined the Intergovernmental Authority on Drought and Development (IGADD, renamed the Intergovernmental Authority on Development [IGAD] in 1996), and assumed observer status at the Arab League.

Notably, upon gaining independence, Eritrea not only became the first state in Africa to achieve independence from an African state, it also had won the longest armed conflict in Africa’s history.

Though the outcome of the referendum was hardly ever in doubt, the victorious EPLF refrained from declaring outright independence in May 1991. This was because it was keen to demonstrate the Eritrean people’s strong preference for independence, and it was aware that sovereignty, legitimacy, and membership in the international community were “predicated on a democratic and legal conclusion to the conflict.”

Thus, quickly after the EPLF triumphantly rolled into Asmara in 1991, winning de facto independence and welcomed by ecstatic crowds, preparations began to allow the Eritrean people to determine their political future through an internationally supervised referendum.

On May 29, 1991, Isaias Afwerki called upon the UN to “shoulder its moral responsibilities [to help conduct a free and fair referendum on Eritrean self-determination] without further delay.” In April 1992, the PGE set up a Referendum Commission, and it also passed the Eritrean Nationality Proclamation (No. 21/1993), which set the criteria of citizenship as a prerequisite for participation in the referendum. A computerized registration of voters was also organized.

Later that year, the UN General Assembly authorized the Secretary-General to establish the UN Observer Mission to Verify the Referendum in Eritrea (UNGA Res 47/114 [16 December 1992]). The mission was deployed to Eritrea in January 1993, opening offices in Asmara, Adi Keih, Mendefera, and Keren. Inter alia, the UN would help with the technical task of assessing the conduct of voter registration, campaigning and polling, explaining the referendum process to the population, the launch of a civic education programme to promote the right to popular participation, and the organization of international observers.

While the referendum was characterized by excitement, celebration, and jubilation, the road to that point, confirming Eritrea’s ultimate freedom and independence, had been long, tumultuous, often dark and bloody, and extremely difficult.

Beginning in the sixteenth century, the country was occupied, in turn, by Ottoman Turks, Egyptians, and Italians (from 1886 until 1941). For Italy, particularly under Benito Mussolini’s rule, Eritrea became the base for implementing Italy’s expansionist ambitions in the Horn of Africa and the colony became the industrial centre of the Italian empire. After Italian colonization, the British, who defeated Italian forces in Eritrea at the Battle of Keren during the Second World War, administered Eritrea from April 1941 to September 1952. During this period, first the “Four Powers” (comprising the US, UK, France, and the USSR) and then the UN sought to “determine the final disposal of Italy’s territorial possessions in Africa” and a potential “solution [to] the problem of Eritrea.”

One proposal that nearly came to pass was the “Bevin-Sforza Plan” proposed by the UK and Italy in 1949. The plan, negotiated between the UK’s foreign secretary, Ernest Bevin, and his Italian counterpart, Count Sforza, proposed the partitioning of Libya and Eritrea, with Eritrea to be divided between Ethiopia and Sudan. Ethiopia would have gained the highlands and eastern lowlands, and Sudan the western lowlands.

Throughout the period, Ethiopia, under Emperor Haile Selassie, who had returned from exile, strongly emphasized its claims to Eritrea and actively lobbied the international community to support its stance. In 1949, still unable to find a solution, the UN decided to send a commission of inquiry into Eritrea to explore the situation. Prophetically, one of the delegation’s members, Sir Zafrulla, the Pakistani representative, in a subsequent report on the mission, warned:

“An independent Eritrea would obviously be better able to contribute to the maintenance of peace (and security) than an Eritrea federated with Ethiopia against the true wishes of the people. To deny the people of Eritrea their elementary right to independence would be to sow the seeds of discord and create a threat in that sensitive area of the Middle East” (GAOR 1950: 346; Haile 1988: 21).

Of note, US officials in Eritrea also acknowledged that the large majority of Eritreans preferred independence and that there was “no real sentiment” among the population for federation with Ethiopia. However, the US, prioritizing foreign policy and geostrategic interests at the expense of justice and the desires of the Eritrean people, supported the claims of its ally Ethiopia.

Soon after, on 2 December 1950, the UN General Assembly adopted Resolution 390 A(V), of which the US was the chief architect, declaring that, “Eritrea shall constitute an autonomous unit federated with Ethiopia under the sovereignty of the Ethiopian Crown.”

The resolution created a loose federation where Eritrea would be placed under the Emperor’s control but retain its own administrative and judicial structures, its own flag, two official languages (Tigrinya and Arabic), and control over its domestic affairs, including police, local administration, and taxation.

From the start of the federation, however, Haile Selassie undermined Eritrea’s autonomy. He decreed a preventive detention law that allowed Ethiopian forces to suppress Eritrean political movements and arrest newspaper editors, while also forcing elected community leaders to resign. The Emperor also replaced the Eritrean flag with that of Ethiopia’s and replaced Eritrea’s code of laws with Ethiopia’s code.

Furthermore, Haile Selassie imposed the use of Amharic (Ethiopia’s main language) in public services and schools, which beyond violating the UN Resolution, created a formidable obstacle to the learning abilities of Eritrean children and youth, particularly in secondary and university entrance examinations, and effectively barring the way of thousands of Eritreans to higher education. Additionally, the Emperor seized Eritrea’s share of customs duties, banned trade unions, and moved most of Eritrea’s industries and businesses to Ethiopia.

Then, on November 14, 1962, Ethiopian troops forced the Eritrean Parliament to dissolve, and Eritrea was officially annexed as Ethiopia’s fourteenth province.

Throughout this period, Eritreans peacefully protested and resisted Ethiopia’s attempts to jeopardize the Federation. Mass demonstrations and strikes by students, teachers, and workers were common. The response by the authorities was often brutal, involving mass and arbitrary arrests, extended detentions, assaults, and the killing of Eritreans.

Eventually, seeing little other viable alternatives, Eritreans transitioned from street demonstrations, non-violence, and peaceful protest, to active, armed resistance. On September 1, 1961, Hamid Idris Awate and a small group of companions fired the first shots of what would become the 30-year armed struggle for independence.

Eritrea’s war for independence from Ethiopia, which was ruled first by Emperor Haile Selassie and then the Marxist Government of Colonel Mengistu Haile Mariam, killed tens of thousands of combatants and civilians and created hundreds thousand refugees. It also severely damaged the economy, contributed significantly to regional instability, and was exacerbated by harsh environmental conditions.

Despite lacking any considerable international economic, political, or military support, Eritrea – initially through the Eritrean Liberation Front (ELF), before its fragmentation, and then through the self-reliant, more successful EPLF, which became one of the world’s most organized, cohesive guerrilla organizations – posed a formidable opponent to Ethiopia, one of Africa’s largest and best-equipped militaries. At various times throughout the duration of the conflict, Ethiopia was greatly supported by the Cold War superpowers, the US and USSR (sometimes simultaneously), as well as many other countries, including, among others, Israel, East Germany, Cuba, and Yemen.

By early 1991, the EPLF intensified its attacks along the eastern coast to seize Assab and cut off Ethiopian access to the sea. On May 21, they captured the city of Dekemhare, and Colonel Mengistu fled from Addis Ababa to Zimbabwe. Days later, the EPLF entered Asmara welcomed by jubilant crowds, signifying the end of the armed struggle for independence, and the plans for the historic referendum were begun.

Two years later, the Eritrean dream, which many had ignored, claimed was unattainable and impossible to achieve, or sought to extinguish, became reality. Eritreans finally were able to exercise their inviolable and inalienable right to self-determination in a free and fair referendum on the issue for which they had long campaigned and fought for: Freedom and Independence.