Aaron Maasho, who is a controversial Ethiopian journalist working for the Reuters news agency in Addis Ababa, recently wrote a false article about Zersenay Tadese, after an unverified Twitter account pretending to be him, said his relative was held captive in Sinai for ransom.

Although Aaron deleted his article within a few hours of publishing it on the Africa section of Reuters’ website, the damage was already done.

This tweet below, which was made by a person masquerading as Zeresenay Tadese, is all it took for a controversial Ethiopian journalist, who has a history of slandering Eritrea in the press, to spread misinformation about the seven-time Eritrean gold medalist.

It is highly unusual for journalists to take the comments of an unverified Twitter account and publish an article; especially on one of the largest media platforms in the world. Such blatant disregard for even the minimum ethics of journalism raises a number of questions, including whether Aaron is abusing his position at Reuters to shape a negative and distorted perception of Eritrea in the media, a country his autocratic Ethiopian regime is at odds with.

Indeed, many Eritreans questioned Aaron’s dubious source. Salem Solomon, a reporter from Tampa, took to Twitter to ask why he didn’t provide a secondary source or an interview for his claim, which is what credible journalists are obligated to do.

Hey @AaronMG, is this confirmed? Where is the second source or an interview? Only based on a @twitter post? #Eritrea https://t.co/pUNsJByw1I

Earlier on Saturday morning, Bealfan T. Haylean, another Eritrean journalist, who is affiliated with the Bloomberg news agency and is a longtime critic of Eritrea, said he had spoken to Zeresenay over the phone, who allegedly told him he had no relatives kidnapped in Sinai, Egypt.

But here is where the story takes different twist that really makes you want to shake your head. A day after Bealfan claimed to have spoken with Zeresenay, another Eritrean (Milena Bereket), who lives in Eritrea and has a track record of being a credible source, said she had also spoken with Zeresenay and he told her it was the first time he had heard of this false story. This raises another serious question: did Bealfan makeup his claim of talking to Zeresenay? It certainly appears to be that way.

I spoke w/#ZeresenayTadese – 7pm #Eritrea time on 14/7/13 was the FIRST time he had heard of the fake account/Sinai ransom tweet! Period!

…which means that "journalist" that tweeted *yesterday* saying he spoke with him was LYING! …doubled period.

By this point, the circumstantial evidence was mounting against Bealfan. It was obvious to Eritreans and observers, that Bealfan likely made it all up. He was also becoming more defensive and agitated on Twitter as the day progressed. Even though Bealfan is is associated with EYSC, an Ethiopian-backed criminal organization, this still doesn’t explain his motives for pretending to have spoken with Zeresenay.

Though he may work for a news agency; @BealfanT, irregardless, this individual is a fraud and he's purposefully spreading lies. 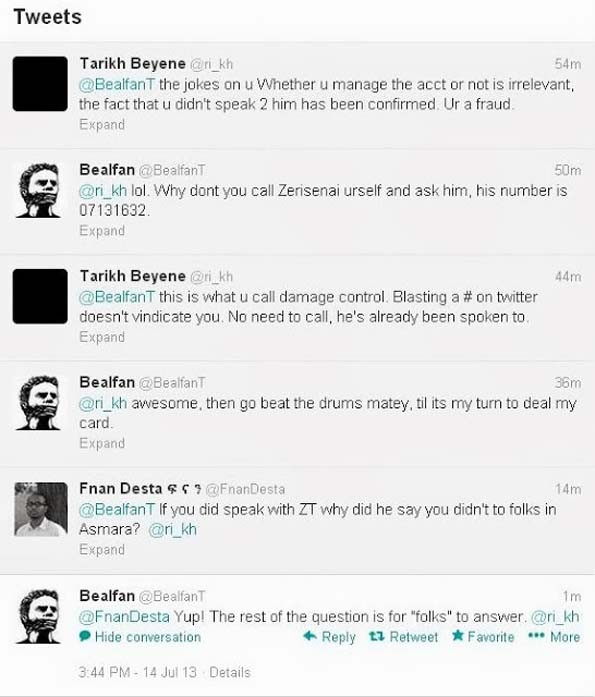 According to some Eritreans, Bealfan is allegedly behind the impersonation of Zeresenay on Twitter. They allege his motives for impersonating him and tweeting his relative is being held captive in Sinai for ransom, was done to politicize and bring attention to economic migrants who are being held captive by their Bedouin smugglers in Egypt.

While these claims are purely speculative at the moment, i’m sure whoever is found to be behind this hoax, he or she likely did not imagine their false tweet would receive the attention of any news agency; let alone one of the largest in the world. But with Aaron working for Reuters, anything is possible, so long if it is a negative and false story about Eritrea, of course.

As a final point, it is absurd to believe that an Ethiopian, who lives in one of the most repressive states in the world, can independently report on issues in his country and region without the risk of his draconian regime throwing him in prison. After all, this is a regime that has forced over 79 journalists to flee their country – the highest total in the world.

To pretend Aaron is not toeing the regime’s line is an insult to every thinking person’s intelligence.