Where do Horn of Africa states stand on the Qatar-Gulf crisis?

A number of African nations have begun taking sides in the dispute between Saudi Arabia and Qatar over the latter’s ties to Iran, the Muslim Brotherhood, Hamas, and other groups that the Saudi government deems extremists or terrorists.

The Saudi Kingdom closed its land border with Qatar earlier this month, imposing an economic embargo and severing diplomatic relations. It also closed its airspace to Qatar Airways, dealing the commercial airliner a major blow by forcing it to reroute Europe-bound flights.

Yet Qatar’s active foreign policy and international investments mean that it is unlikely to be easily isolated. Already Turkey and Iran have come to the aid of the Gulf nation, helping mitigate the impact of the economic embargo.

Meanwhile, Saudi Arabia has been building its own coalition against the emirate, seeking to ramp up the diplomatic and economic pressure. Egypt, Bahrain and the United Arab Emirates severed ties with Qatar while Jordan downgraded its diplomatic representation.

How is the crisis affecting regional alignments in the Horn of Africa and the continent at large? The Messenger explains:

Khartoum has maintained active contacts with Qatar since the outbreak of the crisis and offered support for a Kuwaiti initiative to defuse tensions. Sudan’s foreign ministry called the crisis an “unfortunate development between brotherly Arab states.”

President Omer al-Bashir on Tuesday received Qatar’s Minister of State for Foreign Affairs Sultan bin Saad Al-Muraikhi. The Gulf nation has been a significant lender of hard currency to Sudan’s central bank and also brokered a deal between Khartoum and Darfur rebel groups.

Sympathizers with Qatar both within the government and in the Islamist Popular Congress Party (PCP) can be expected to pressure Sudan’s government to come out more strongly behind Qatar. PCP’s secretary-general earlier this week denounced Saudi Arabia’s criteria for designating Qatar as a terrorist-supporting country, saying that Palestinian movement Hamas should not be considered a terror group.

Sudan has strong ties with Saudi Arabia as well, however, and has joined a military coalition against Shiite Houthi rebels in Yemen. Also, it cut diplomatic ties with Iran in solidarity with Riyadh after an attack on the Saudi embassy in Tehran in January 2016.

Djibouti has announced its ‘solidarity’ with the Saudi-led coalition boycotting Qatar, saying it officially downgraded its level of diplomatic representation in Qatar. A statement by the country’s foreign ministry implied that it supports the boycott on grounds that Qatar has backed “terrorism and violent extremism.” However, the final paragraph of the statement dated June 7th called for the “brotherly Arab countries” to resolve their differences through dialogue.

Djibouti is a member of the Arab League and as such its support for Saudi Arabia will add symbolically to the pressure on Qatar, albeit without necessarily adding practically to the strength of the economic embargo. Djibouti’s ties with Saudi Arabia have been strong, with plans underway for a pact that would allow the latter to build its own military base in Djibouti.

On the other hand, Djibouti benefitted from a Qatari mediation in 2010 with its neighbor Eritrea. About 450 Qatari troops were reportedly stationed at a mountainous border crossing between Eritrea and Djibouti in connection with the deal, according to an Eritrean armed group, although a UN monitoring group put the tally closer to 200.

Qatar said Wednesday it had pulled out all of these troops,  without saying why. One possible explanation is retaliation for Djibouti’s downgrading of diplomatic ties last week, another is that the troops may be wanted back home.

The Red Sea nation of Eritrea has taken a middle road, saying that the Saudi-led coalition embargoing Qatar has taken an initiative ‘in the right direction,’ while itself opting not to cut diplomatic ties with Qatar. 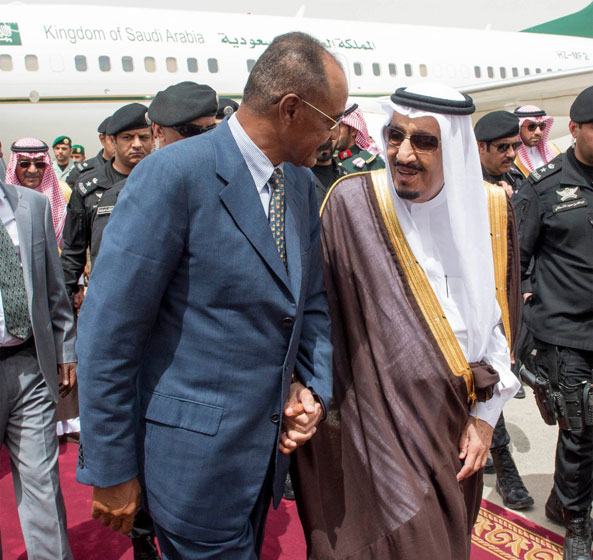 Asmara’s Ministry of Information announced June 12th, “The decision that Egypt, Saudi Arabia, the United Arab Emirates and Bahrain have taken is not confined to Qatar alone – as the potential of Qatar is very limited. It is one initiative among many in the right direction that envisages full realization of regional security and stability.”

The statement implies that Qatar alone is not to blame for terrorism, which emanates from multiple sources:

“The causes of the spiraling upheaval are numerous, complicated and long-standing. Deterrence of the scourge and its perpetrators so as to guarantee sustainable security and stability is not an easy task.”

Asmara says essentially also that it does not want too directly involved in the Gulf dispute: “it is not a matter that requires invitation of the Eritrean Government or solicitation of its vote.”

Eritrea hosts a military base belonging to Qatar’s Gulf rival UAE. But the country also has significant ties with Doha. In a podcast with The Messenger last Wednesday, Professor Harry Verhoeven explained that Eritrea is a country with few international allies and that Qatar is one friend that has proven itself “reliable.”

Both sides in the Gulf Crisis have influence in Somalia — the Emiratis and Qataris were allegedly involved in backing candidates in the recent Somali federal elections, and both sides have business interests. Somalia’s government has so far resisted Saudi pressures and inducements to cut ties with Qatar. 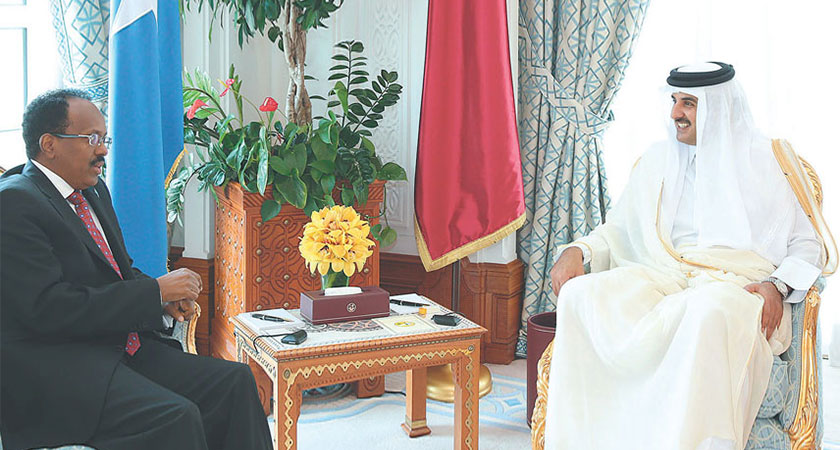 Professor Harry Verhoeven cautions of a possible ‘bidding war’ for loyalties, which could influence local politics and conflicts. Somali and Gulf press reports detail new Saudi and Emirati efforts to bring Somalia out of the Qatari orbit. UAE expelled a Somali competitor in the Dubai International Quran Competition, Radio Dalsan reported from Mogadishu, suggesting the move was retaliation for Somalia’s failure to cut ties with Qatar.

Meantime, Saudi officials invited Somali ministers to Riyadh for talks on development projects, while unconfirmed press reports say that Somalia’s president was offered $80 million if he would agree to sever ties with Qatar.

Another development in Saudi-Somali relations concerns the  number of Somali pilgrims allowed to go on Islamic pilgrimage this year. Jamal Mohamed Hassan, Somalia’s minister of planning announced that Saudi Arabia has increased the allowable number from 7,300 this year to 9,300 next year.

Qatari foreign minister Sultan Bin Saad al-Muraikhi arrived in Mogadishu on Sunday, where he met with President Farmaajo to discuss the crisis.

The government of Somaliland, which claims its own sovereignty and does not consider itself part of Somalia, announced June 10th that it fully supports Saudi Arabia and the United Arab Emirates’ stance on Qatar. It further banned Qatar Airways from using its airspace. Since Qatar does not recognize Somaliland as sovereign, nor does Somaliland have an airforce, it is not immediately clear whether Qatar Airways will respect the ban.

Somaliland has close ties with the Emirates, owing to a deal whereby Dubai Ports World is refurbishing the Berbera port. UAE is also expected to establish a military base in Somaliland.

Several West African nations have aligned themselves with Saudi Arabia. Chad recalled its ambassador from Qatar for consultations, explaining in a statement, “The Chadian government calls on all concerned states to privilege dialogue to solve this crisis and asks Qatar to respect its commitments by ceasing any attitude likely to harm cohesion of states in the region and peace in the world.”

Likewise, Senegal was among the first countries to join the Saudi coalition, announcing the recall of its ambassador from Doha starting June 7th. Senegal’s neighbour Mauritania, a member of the Arab League, also severed ties with Qatar, explaining via its state news agency, “The state of Qatar has linked its policies … in support of terrorist organizations and the propagation of extremist ideas.” OPEC member Gabon also condemned Qatar for “failing to respect international commitments and agreements on counter-terrorism.” 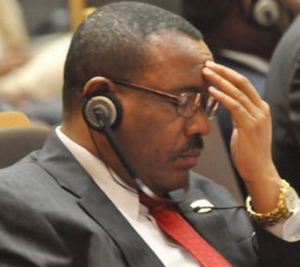 Ethiopia has opted for neutrality so far. “Though the Ethiopian foreign ministry has yet to comment, there is a strong feeling among officials in the ministry that they are caught in the middle of a bewildering regional dispute,” the Ethiopia Observer reports this week.

“Ethiopia is acting with great caution and it will come up with a statement urging for dialogue,” a senior diplomat told the local outlet.

On the other hand, Ethiopia has close ties with Israel, where Prime Minister Hailemariam Desalegn visited last week; although the Israelis have not taken a public stance on the crisis, they are wary of Qatar’s links to Hamas and Iran and their position therefore aligns more closely with Saudi Arabia and the UAE.