They are Ambassadors from (L-R) the UK, Qatar, Yemen, Italy, Israel, and France. 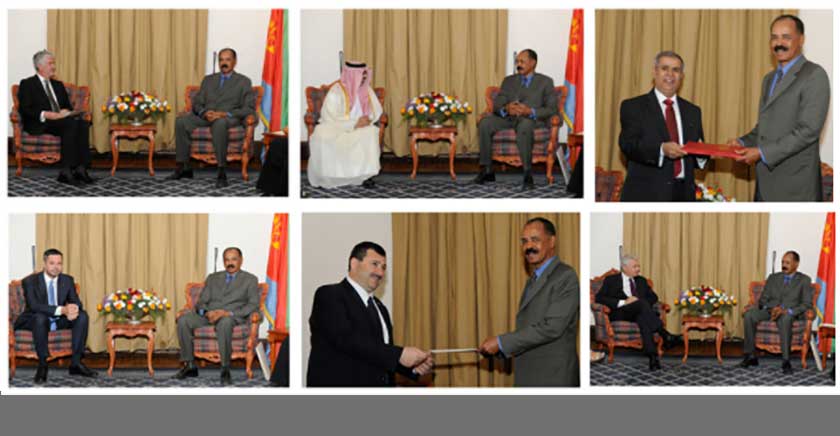 During the presentation ceremony at Denden Hall with the Ambassador of the UK and Northern Ireland, President Isaias explained the erroneous stance of the British government towards Eritrea and reiterated that Eritrea advocate for amicable relations.

Similarly, during the meeting with the Ambassador of the State of Qatar, President Isaias underlined that Eritrea would strive to further strengthen the existing friendly relations between the two countries.

While receiving the credentials of the Israeli Ambassador, the President noted that the existing predicament in the Middle East and the modality to find solution is directly affecting the region and called on Israel to play due role in promoting regional peace and stability.

Also in the meeting with the Italian Ambassador, President Isaias stressed that Italy is not playing due role in former colonies and asserted that the country is expected to play due role in bilateral relations and regional issues.

Likewise, President Isaias and the French Ambassador discussed the forth coming election in that country. Moreover, the President conducted discussion with the Yemeni Ambassador on efforts to bring about peace and stability in that country and the region as a whole.