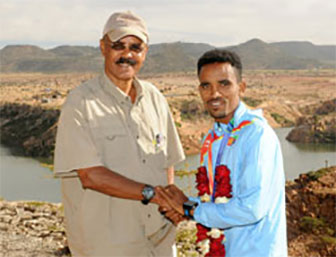 President Isaias said that the people and the country are proud of the victory athlete Ghirmai registered and wished him more success in future competitions.

The Commissioner of Culture and Sports, Ambassador Zemede Tekle explained that more Eritrean athletes are emerging victorious and are keeping the momentum that has already been set. He also said that the support athletes are receiving from the people and Government have significantly contributed in their success.

Athlete Ghirmai on his part underlined the importance of his victory in the New York City Marathon for future success and dedicated his trophy to the people and Government of Eritrea for their unremitting support.

Similarly, athlete Ghirmai was awarded a warm welcome at the Asmara Stadium. Present during the welcoming ceremony were, senior government and Front officials, members of the diplomatic corps as well as athletes and students.

Ambassador Zemede Tekle said during the event that that Eritrean athletes are playing significant role in reflecting the true image of their country at international events. He went on to say that the achievements the athletes are registering in different sports have motivated the people and Government of Eritrea to exert more efforts for the development of sports in the country.

It is to be recalled that Athlete Ghirmai Gebreselasie won the 46th New York City Marathon in a time of 2:07:51.