President of the State of Eritrea, Mr. Isaias Afwerki addressed the general debate of the 66th Session of the United Nations General Assembly in New York on the 23rd of September 2011. The following is the full text of the wonderful speech made by the president. 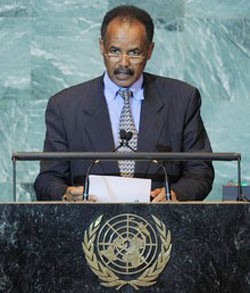 Let me begin by congratulating you Mr. President, and your country Qatar, on your election to preside over this session of the United Nations General Assembly and by thanking Secretary General Ban Ki-moon for his leadership and achievements.

We gather at this 66th session of the General Assembly of the United Nations at an important juncture in the history of the world. We meet at a time of exciting possibilities and opportunities for the betterment of hundreds of millions of people; and yet these favorable prospects must be weighed against the profound dangers and sense of anxiety that currently grip our world. The persistent economic and financial crises, massive unemployment, growing inequality between and within nations,  spiraling levels of  debt,  recurrent famines  and starvation, high levels of  mortality from easily preventable diseases and an increasingly fragile environment are wreaking havoc on the lives of  people and the future of  nations. Despite the end of  the cold war and the premature declaration of  the emergence of  a new world order, wars and military interventions continue, and almost invariably fail to resolve, and further complicate, the problems they set out to  solve.

It is true that none of these problems are new; yet, there is no denying that the malaise seems much more intractable today. Three years ago the world was infused by a renewed spirit of hope and possibility with the historic election of President Barack Obama and the freshness of his message of positive change.  Despite his best efforts, the strength of his personality and his many talents, however, that hope has not been realized.  The reality is that the problems we face are systemic, were accumulated over many years and decades, and require systemic and structural change.  Effecting this real, positive and durable transformation requires the effort, not only of one leader and one nation and its allies, but the concerted effort of all nations. We look toward the emerging and re-emerging powers- China, India, Russia, Brazil and others- to show more leadership and shoulder bigger responsibilities. We also believe that all nations, whatever their size, can and should play an increasingly bigger and effective role in the endeavor to build a fair, just, equitable and sustainable world.

This year, 2011 , has witnessed the stirring and courageous initiatives taken by the people of many nations to effect fundamental changes that would lead to a new and dignified beginning for them and their countries. While the epicenter of the movement has been in North Africa and the Middle East, it is not limited to the Arab world or the developing nations. In much of the developed world, there is now the same sense of anger and frustration, the same discontent with governments that have become beholden to a small minority with special interests, the same yearning for decent jobs, meaningful political participation and dignified lives. These realities cannot and should not be denied. Clearly, this is not the time for complacency or arrogance. What is required today is a frank acknowledgement of the stark global reality we face, the readiness to empower our peoples and our youth and to work cooperatively for a secure and brighter future for all.

As we ponder the future and take stock of the sweeping changes that are underway, we cannot fail but underscore that the United Nations has already become hopelessly outdated and risks becoming totally irrelevant. We all profess agreement on the need to transform the institutions and procedures of the United Nations but we remain paralyzed, with no prospects for early progress. Eritrea firmly associates itself with those who stress the urgency of real reform and believes that what is required is not a mere tweaking of the system but a comprehensive transformation of the institution. The critical element of this transformation has to be the strengthening of the authority and role of the General Assembly. As long as this paramount body is deprived of real decision-making powers, the United Nations will remain unrepresentative of the nations of the world, even if the size and composition of the Security Council changes significantly. Similarly, there can be no meaningful revitalization without overhauling the methods of work and procedures of the United Nations, respecting the rights of member states and ensuring transparency and accountability in all bodies of the organization.

Half a century has elapsed since the heyday of the era of decolonization that led to the emergence of independent African nations. In spite of the hope and enthusiasm of the early years and the achievements registered since, the past five decades have been largely disappointing. The trying times and the internal and external challenges that caused them are certainly not over, as Africa continues to struggle in a difficult and complex international environment. And yet, without exaggerating the possibilities or underestimating the difficulties, it is clear that a number of African countries are entering a period of political, economic and social renewal. They are convinced that Africa has the human and natural resources to succeed. It will not shun international partnerships but it will give primacy to its own capabilities and to cooperation at the continental and sub-regional levels. It is this perspective that is spurring African countries to focus on the key requirement of developing the continent’s infrastructure and promoting trade and economic links among themselves. Another key component is the revitalization of the African Union and the sub-regional organizations. At the sub-regional level, Eritrea is committed to economic development and integration in the wider Horn of Africa and Red Sea regions. We are convinced that no country can succeed in a turbulent environment. We will work for the revitalization of IGAD and strive to make it effective in promoting economic development and integration. We welcome independent South Sudan and we will work with both Sudan and South Sudan, with whom we have long-standing ties, as they grapple with their domestic situations and endeavor to build cooperative relations.

On Somalia, it has now become abundantly clear that there is a need for a new approach as the current one has exhausted itself and can only lead to further complications. Given that the central objective remains the reconstitution of Somalia and the rebuilding of effective institutions, it is imperative to seriously engage and bring into a Somali-owned political process all key stakeholders, including the governments in Somaliland and Puntland.

Regarding the Middle East, which is a key item on the agenda of the current session of the General Assembly, Eritrea reaffirms its long-standing support to the right of the Palestinian people to self-determination and an independent, sovereign state. It also upholds the right of Israel to live in peace and security within internationally recognized boundaries. At the same time, Eritrea is genuinely concerned that the current drive for UN membership for Palestine does not become a symbolic battle bereft of real substance. It is only prudent and relevant to recall that with the exception of few realistic voices, the Oslo Accords were greeted with much acclaim and that almost two decades later, they have not led to either Palestinian statehood or peace between the Palestinian and Israeli peoples.

Finally, Mr. President, I would be remiss in my duty if I did not remind the United Nations of its responsibility to uphold its Charter and international law as well as numerous Security Council Resolutions and take urgent action to end Ethiopia’s occupation of sovereign Eritrean territory. Coupled with the lifting of the illegal sanctions on Eritrea, this would not only serve the cause of justice, but it would enable the people of the region to work together to further their collective interests and consolidate Africa’s place in the world.