The Socio-Political and Governance Dimensions of Hunger: Exploring Ethiopia’s Crisis

Food insecurity is one of the most pressing humanitarian issues in the Horn of Africa, and the situation is expected to deteriorate further over the coming months. Ethiopia, in particular, is faced with a massive crisis. According to the European Commission, “[t]he situation in Ethiopia is at present the most alarming, where the number of food insecure people has increased from 2.9 million at the beginning of the year to 8.2 million by early October. It is foreseen that these numbers will further rise up to 15 million by the end of 2015. Rates of acute under-nutrition are well above emergency thresholds in many parts of the country, while the response to this situation is hampered by an important shortage of nutrition supplies. In the worst affected areas in the Northern, Central and Eastern regions of the country hundreds of thousands of livestock deaths are reported.”

Moreover, UNICEF warns that a large number of those facing hunger will be children; approximately 5 million children will “require relief food assistance during the last quarter of 2015,” with hundreds of thousands urgently requiring treatment for acute severe malnutrition.

The crisis is largely being attributed to the El Niño weather phenomenon and the underperformance of two consecutive rainy seasons, which have combined to negatively affect the country’s agricultural harvest cycle. During the last two months, prolonged, erratic and insufficient rainfall has led to poor vegetation conditions in southern Ethiopia, and widespread drought, which has severely impacted ground conditions.

However, although environmental factors have been significant, it is important to examine the crisis within a broader framework. The roots of hunger are multidimensional and complex; beyond immediate environmental causes, hunger involves a variety of factors including, amongst others, socio-political and governance dynamics. According to scholar Tim Hitchcock,

“famines aren’t about the lack of food in the world. They aren’t about the lack of aid. We know that the harvest is going to fail in Eastern Africa once every 12 to 15 years. If you have a working state and your harvest fails, you raise the cash and you buy food and ship it in, and you make sure it is distributed. You don’t allow people to starve.” In Ethiopia, “[hunger and] food insecurity stems from government failures in addressing major structural problems” (Siyoum, Hilhorst, and Van Uffelen 2012).

The European Union (EU) has provided over €1 billion in humanitarian aid to the Horn of Africa since 2011, much of which has gone to Ethiopia. Annually, Ethiopia receives hundreds of millions of dollars in aid from a variety of bilateral and multilateral sources; across the 2004-2013 period, the country was the world’s 4th largest recipient of foreign assistance, receiving nearly US$6 billion, while in 2011 alone, its share of total global official development assistance – approximately 4 percent – placed it behind only Afghanistan.

However, even while it has long-been one of the leading recipients of foreign, humanitarian, and food aid in the world, the country continues to face crises. Why? One influential factor is the debilitating mix of domestic corruption and poor governance. According to prominent development scholar and international economist Dambisa Moyo (2009), aid is often closely linked to corruption and poor governance, and

“aid flows destined to help the average African…[get] used for anything, save the developmental purpose for which they were intended.” Moreover, “a constant stream of ‘free’ money is a perfect way to keep an inefficient or simply bad government in power.”

In the 1980s, during widespread famine and drought, Ethiopia’s brutal Dergue regime, led by Col. Mengistu Hailemariam, diverted millions in humanitarian aid to the military, while under the despotic rule of Meles Zenawi, aid was frequently utilized as a political tool of manipulation and repression. Several months ago, leaked emails revealed that the Ethiopian regime, which is now making appeals for aid and external support, was paying the Italian surveillance firm, Hacking Team, to illegally monitor journalists critical of the government.

The indicators, based upon a variety of perceptions-based data sources, provide measures for various states, with scores ranging from around –2.5 (low) to around 2.5 (high). Table 1 illustrates that corruption, rule of law, and governance are significant problems within Ethiopia. 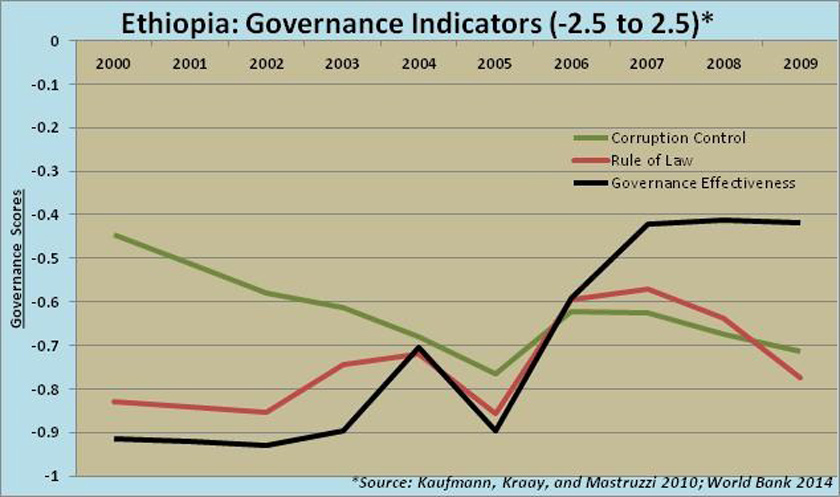 Another area of considerable concern is democracy and civil liberties. Ethiopia has been consistently criticized by an array of international rights groups for its broad range of human rights abuses including its harsh repression of minorities and journalists, press censorship, draconian anti-terror laws that are utilized to silence all forms of dissent, and brutal crackdowns upon opposition groups and protestors.

According to the Polity IV Project (Marshall and Gurr 2013), which is widely used in international comparative analyses of democracy, governance, and human rights practices, Ethiopia is one of the most authoritarian, autocratic states in the world. The Polity IV Project codes the political characteristics of states, using an array of data sources, to rank states from –10, representing least democratic and most autocratic states, to 10, representing most democratic states. Table 2 displays that Ethiopia’s scores place it within the autocratic, authoritarian category. The applicability of this categorization is underscored by the fact that, mere months ago, the government in Addis Ababa won 100 percent of parliamentary seats in a widely discredited national election that involved massive irregularities and intimidation, crackdowns, and arrests of the opposition. 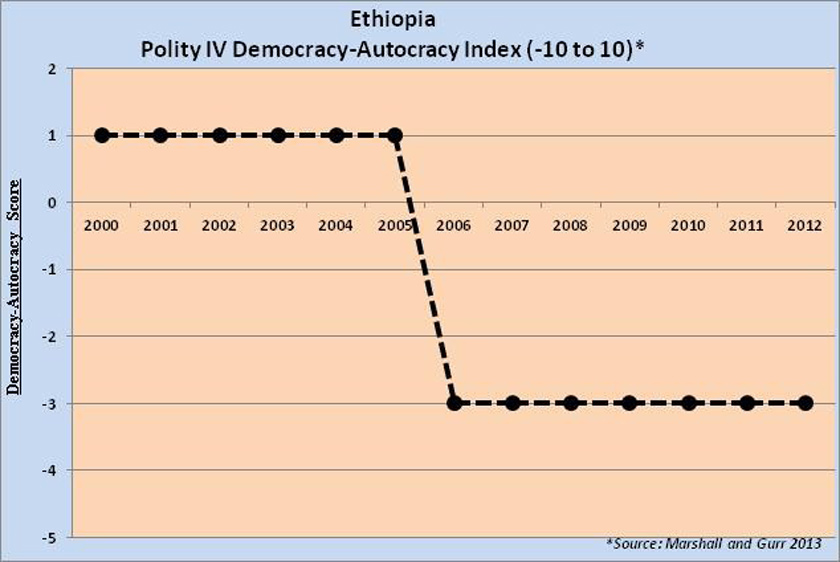 Importantly, scholars and analysts have pointed to the existence of an intricate relationship between democracy, civil liberty, and hunger or famine. According to internationally renowned development and human rights scholar Amartya Sen, “no democracy has ever suffered a great famine” (1999: 180-181). Specifically, Sen notes that throughout history famines have been avoided in democratic states because these states’ promotion of political and civil rights afford people the opportunity to draw forceful attention to their general needs and to demand appropriate public action through voting, criticizing, protesting, and the like. Authoritarian states, which curtail democracy and free press, sustain much less pressure to respond to the acute suffering of their people and can therefore continue with faulty policies. Sen’s discussion of many of the great famines within recent history – including those in Ethiopia, Somalia, Sudan, China, the former USSR, and North Korea – helps emphasize the fundamental relationship between democracy, civil liberties, and widespread famine and hunger (Sen 1999).

Ironically, while Ethiopia is facing a hunger crisis and making urgent appeals for aid, tonnes of food are actually leaving the country. This illogical development is due to the fact that the regime in Addis has sold large tracts of arable land to a range of foreign investors and corporations in transactions described as “land grabs.” The process also involves “villagization,” a government-led program which entails the forcible relocation of indigenous communities from locations reserved for large, foreign-owned plantations. Reports by rights groups list a plethora of human rights violations, including murders, beatings, rapes, imprisonment, intimidation, and political coercion by the government and authorities. A report by the Oakland Institute (OI), a prominent international human rights organization, vividly describes how via “strongarm tactics reminiscent of apartheid South Africa, the Ethiopian regime has moved tens of thousands of people against their will to purpose-built communes that have inadequate food and lack health and education facilities to make way for large, foreign-owned commercial agricultural projects.”

Notably, the program has also led to food insecurity, a destruction of livelihoods and the loss of cultural heritage of ethnic groups.

Essentially, the Ethiopian regime’s participation in “land grabs” represents a dire lack of leadership, prioritization, and proper governance. It has caused terrible disruption to local communities and greatly harmed food security in the name of economic development. Such failure is reminiscent of previous humanitarian crises in the country. As described by Mosse (1993), during the 1960s and 1970s, the nomadic Afars of Ethiopia were displaced from their pasture lands in the Awash valley. The Awash River was controlled in the 1960s to provide irrigation for Dutch, Israeli, Italian, and British firms to grow sugar and cotton. Consequently, the annual flooding of the river, which covered the valley with rich soil and provided grazing lands for the Afars, was disrupted. The Afars went in search of new pastures and attempted to make a living on the ecologically fragile uplands, which were poorly suited to their nomadic lifestyle. Cattle found less to eat and the Afars began to starve. Subsequently, when drought struck Ethiopia’s Wollo region in 1972, between 25 and 30 percent of the Afars perished. The problem was not due to particular inadequacies of the Afars – who had flourished for centuries; rather, the problem was with the attempt to develop the Afar lands and bring them into the mainstream economy, without any regard for their actual needs. Ultimately, the pursuit of economic growth or development, if not sensitive or responsive to local needs, can so damage existing local populations and communities that substantial harm, poverty, deprivation, and hunger are created as a result (Mosse 1993).

Ethiopia’s hunger crisis is an important humanitarian issue meriting immediate attention and concern. In order to fully understand the crisis it is imperative to recognize that while the environment has been an important contributing factor, a range of other structural socio-political and governance dynamics, including corruption, the lack of rule of law or democracy, poor governance, failures in long-term planning, and misplaced national and development priorities have also been highly influential.