The BBC Amharic on its part reported there were clashes between OLF militiamen and federal security forces this morning in Kelem Wellega zone Gidami woreda, Kelem town. Citing its anonymous sources, the BBC Amharic also said that civilians were in hiding for fear of their lives.

Other sources also tell Addis Standard that Dawud Ibsa was blocked from traveling beyond Nekemte on Saturday on 27 October by his own supporters and armed militiamen who suspected his trip to that part of the country was part of efforts to disarm OLF’s militia. The same sources say he was forced to cancel his trip and return to Addis Abeba on the same day. It is not clear why he was in the area, where he draws a large support from.

Pictures spreading on social media show several protests taking place today in cities and towns in west Wellega zone of the Oromia regional state in western Ethiopia by supporters of the OLF demanding a stop in attempts by federal government to disarm the rebel group.

DW Amharic added that Oromia Regional State President Lemma Megerssa has on Saturday confirmed the the news that OLF supporters have blocked business activities in the area and affected the daily routine of civilians. He denounced the confrontations and stressed that on the struggle of OLF supporters was “not in the right discourse”. He asked for calm and law and order, DW Amharic reported.

The escalation of tensions happened even after a statement issued by OLF on Saturday urging its supporters for calm. However, the statement made a vague reference to the process of disarmament when it condemned the narrative of one disarming the other as a highly distorted narrative and should be treaded carefully.

In what appears to be an apparent condemnation of online criticisms against it by pro-government individuals, OLF’s statement also said that such distorted narrative of disarming its militia should not be disseminated by individuals who are not concerned with the process.

President Lemma on his part said that disagreements between OLF and Oromo Democratic Party (ODP) should not create opportunities to those who want to hurt the Oromo people and appealed for OLF’s supporters not to take to the streets until after the issues were resolved the government amicably. Our people have passed the point for staging a protest,” Lemma was quoted as saying.

Several Killed in Clashes Between OLF and Gov’t Forces 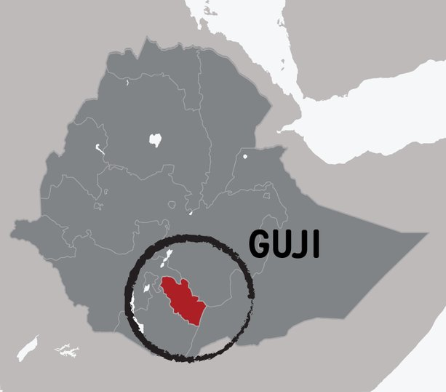 According to ESAT sources, at least five government forces were killed in the fight while about 30 OLF soldiers were injured. It was not immediately clear how many, if any, combatants were killed on the OLF side.

The source said government forces were patrolling the main highway near Gerba town, that was reportedly blocked when they confronted OLF combatants.

Five of the seven government soldiers injured in the fight had died on arrival at the Bule-Hora Hospital, according to the source, who also said two soldiers were sent to the Dilla University Hospital.

Meanwhile, president of the country’s Oromo region told Deutsche Welle Amharic that the decision by some youth to side with the OLF against a well equipped national army was not a wise decision on their part. Lema Megersa called on the youth to return home to their peaceful lives and adhere to a peaceful form of a struggle if they want to assert their political rights.

The Oromo Liberation Front (OLF) is one of the armed opposition fronts that had recently returned to Ethiopia from their base in Eritrea after a call by Prime Minister Abiy Ahmed, who extended an olive branch to all the opposition to come home and take part in a peaceful political process.

Despite a call by the government for all groups to lay down arms, the OLF remains armed, and in fact, it’s combatants have reportedly control some areas in the south and western Ethiopia.

According to sources, OLF and the Oromo youth network called the Qeerroo have taken control of West Guji zone.

Ethnic clashes between the Guji (Oromo) and the Gedeo ethnic groups in June and July resulted in the death of over 300 people and the displacement of about 1 million Gedeos from their homes. It is feared that the safety of those who had recently returned to their villages is in great danger, the source said.