Operation Fenkil was one of the most decisive military operations that heralded the end of Ethiopian colonialism in Eritrea. The operation was carried out through the coordinated attack of the infantry, the mechanized and the then nascent naval forces of the Eritrean People’s Liberation Front (EPLF).

The port city of Massawa was crucial for the Ethiopian Second Division. It had been a life-line for the shipment of its armaments and other logistics. Understanding the importance of the port city to the survival of its war machinery, the Dergue regime spent many years building strong fortifications that surrounded Massawa.

In February 1990, the gallant Eritrean freedom fighters scored a decisive military victory over the then biggest army in Sub-Saharan Africa that was armed to the teeth with sophisticated Soviet weaponry.

“The operation was a pinnacle of success to the EPLF besides proving its steadfastness and just cause,” said Mr. Andebrhan (freedom fighter) and chair of the association of the former 16th and 70th EPLF divisions.

“After the demise of the Nadew command, the collapse of the Ethiopian army in Operation Fenkil was another crucial turning point in the history of the armed struggle,” he added.

The prelude to Operation Fenkil was the demise of the Nadew Command in 1988 in Afabet. After several years of stalemate and war of attrition, the EPLF had shifted its strategy from defense to attacking in 1988.

The EPLF had destroyed the Nadew command in a matter of two days, which was believed to be one of the strongest military commands of the Dergue regime stationed at the front for ten years. The operation, which resulted in the liberation of the town of Afabet, was a surprise to the Dergue army and was a massive victory for the EPLF because of the magnitude of its impact.

>> ALSO READ : A Look Back at the Battle of Afabet

Following the capture of Afabet by the EPLF, the Dergue army was forced to withdraw from much of the Western lowlands of Eritrea.

“The demise of the Nadew command was one of the major successes that demonstrated the change of balance of power and the upper hand of the EPLF over a heavily armed military regime.”

“With its 20,000 well armed military personnel equipped with sophisticated motorized and mechanized units, the defeat of the Dergue in Nadew command emboldened the EPLF fighters’ morale while leaving the Dergue regime in despair. It also was a stepping stone toward the Operation Fenkil because a large amount of weaponry was captured in the Nadew Operation which helped boost the capacity of the EPLA,” said Tegadalay Andebrhan.

The continuous defeat of the Dergue army in several fronts made the Ethiopian senior officers and soldiers lose hope about the fate of the ruling junta. The demise of Nadew command in particular put the military junta’s circle of trust in disarray and led to a foiled coup d’etat by a dozen of generals of the Dergue regime who were later killed.

While the army divisions in Eritrea were in full preparation for the operation, the 70th division of the EPLF meanwhile was conducting operations inside Ethiopia, Asosa, around 1700 km far from Eritrea, as a maneuvering tactic. By the time operation was starting on 8th Feb, the 70th division returned to Eritrea and was stationed in a key area from which the enemy had tried to retreat.

It was concluded that the liberation of the port city would fasten the knot around the Dergue’s neck and create conducive environment to liberate cities and towns in the eastern and southern parts of Eritrea such as Dekemhare, Adi Keyih and Senafe, among others, Tegadalay Andebrhan further noted.

The EPLF launched the coordinated attack to take over Massawa on Thursday, February 8, 1990 at 1:00 AM across 200 Km defense lines stretching from the western periphery of Keren southwards to Ras Kobae, 40 Km north of Massawa.

>> ALSO READ : A Look Back at the Battle of Massawa

Within the early four hours of the battle, the western wing of the EPLF forces captured seven tanks, five BM-21 launcher rockets and other military hardware. The eastern flank of the Ethiopian defense lines was broken by mid Friday, February 9, and the EPLF forces began to close in on Massawa in a pincer movement.

In so doing, they had advanced 60 Km forward from their point of departure. But they had to mop up the chain of closely spaced Ethiopian garrison dotted on the Asmara-Massawa road stretching for 40 Km. After a fierce battle that spanned for 72 hours, the port city of Massawa finally fell at the hands of the gallant fighters of the EPLF at noon, Saturday, February 10.

The Ethiopian army of occupation desperately attempted to turn the tide of events and mounted abortive counter attacks in the following days. On Monday, February 12, Ethiopian troops set out from the Dahlak Islands in an attempt to gain a foothold in Massawa. The endeavor was repulsed with the Ethiopian army losing almost half of its total fleet strength. On the following days, the Dergue army tried its best, but to no avail. 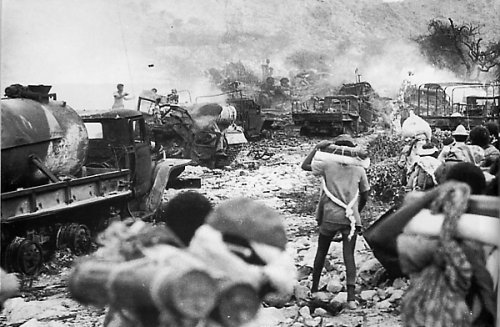 During the seaborne battle against the heavily armed Ethiopian naval forces, the young and least experienced EPLF naval forces inflicted heavy damage with the sinking of nine big Ethiopian warships and the capture of two others whose gun muzzle the EPLF forces turned against the original proprietors.

Instead of accepting defeat and pulling out along with the leftovers of their human and material resources, the Dergue chose to play a blindfolded game of hopelessness.

The indiscriminate aerial bombardment of Napalm and Cluster bombs over innocent residents of Massawa that left many dead, injured and traumatized and infrastructure leveled to the ground attested to the regime’s utter desperation.

After successive colonial rules, Eritrea was able to restore its proper right through the resilience and determination of its freedom fighters and the people. This significant historic juncture was preceded by a series of battles in different parts of the country which all incurred high price — martyrdom.

The momentous Operation Fenkil is commemorated every year in a patriotic fervor. This year, as part of the different activities that are being prepared to commemorate the liberation of Masaswa, the former members of the 16th and 70th EPLF army divisions, who took part in the operation and finally entered the capital through the south after destroying the enemy at the “Dekemhare Front”, conducted a memorial tour last weekend to different parts of the Northern Red Sea region under the slogan “our aim is to be one by keeping our martyrs’ aspiration”.

After independence some members of these divisions were retired and many were assigned to governmental institutions and ministries. In 2000 they formed an association with the aim of helping one another at different social occasions and renewing their memories of the years they spent together.

Mr. Andebrhan Fessehaye said: “We formed the association in order to use it as a platform to bequeath our legacy to the younger generations. These two divisions were together back during the armed struggle for independence and were finally divided into two, the 16th and 70th divisions. The association members are those who overcame difficult times together in a spirit of redemption, dedication, and sacrifice in order to attain freedom. The association now has in its membership the retired, members from the army, the disabled and those who reside abroad”.

The association conducts tours on national holidays. In 2014, it went on a tour to the Dekemhare front on the occasion of the 25th independence anniversary.

>> ALSO READ : A Look Back at the Battle of Dekemhare

After that, they traveled to Massawa where they conducted different activities at the patriots’ cemetery and walked to the tanks monument in Tualet to lay flowers to pay tribute to those who paid the ultimate price in the final battle to capture Massawa. At the ceremony, EPLF war veterans shared their memories about the battle with the public.

Mr. Andebrhan underlined that the trip was made successful thanks to the unreserved cooperation of the Harat Transportation Company, the administration of the sub-zones of Ghindae and Massawa and the Naval Force.