Obama’s Visit to Ethiopia and the National Humilation

We Ethiopians are famous for our hospitality. It has been our specialty since antiquity. The comfort we give to strangers and guests are out of the ordinary. It is regrettable, however, to see the quality of our hospitality and the protocol accompanied with it going down the drain in the era of the present regime.

We felt ashamed during Obama’s state visit recently when the host, the Ethiopian government, turned the norms upside down.

It is sickening to see EPRDF officials failing to act like statesmen even after 24 years in power. It was a shame for the officials to push and pull one another in order to look at the distinguished visitor. Had they remained in line, Obama would approach shake hands with one of them. They indeed behaved like school children. 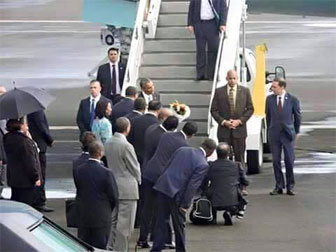 The amazing part of the program was that the Ethiopian head of state, Dr Mulatu Teshome, did not show up to receive his counterpart, President Barck Obama. Instead Ato Haile Mariam Desalegn, head of the government, did meet him. As far as I know, this is unheard of and I am sure the President must have been confused. The incident could be immaterial for TPLF because they still live by the rule of the jungle.

Here is another incident worth mentioning at the infamous ceremony. The way President Obama was invited to inspect the guard of honor, appeared to me haphazard and the whole set up laughable. A seemingly red carpet, approximately 10 to 15 meter long was spread in a narrow and suffocating space. A short guy with a sword in his hand came up running in that small field and Mr Obama had to sprint with him instead of walking through the guard of honor gracefully. The President could not help laughing upon taking his stand.

Bill boards all over the city carried pictures of President Obama and big fliers with sweet words were posted on the wall of high rise buildings. Unfortunately quality control was again in short supply. Words like ” welcome and visit” were spelt as “well come and vesit.” These were the works of cadres, who already had immunity to criticism, inspection and correction.

Lack of precision and quality control are well demonstrated on the modified EPRDF flag. On the ancient beautiful flag of green, yellow and red (that have even been adopted by African countries) EPRDF poised to change the existing concept of the flag and mounted its own emblem of light blue in the form of a circle. But the so called ethnic emblem is an enormous circle, out of proportion and dominating the three original colors.

Many flags of other nations have some kind of emblem engraved or mounted on them in a decent and symbolic manner. They are not there to ruin or disturb other contemporary ethnic beliefs

TPLF regime established on hatred, superimposed its afterthought emblem, to ruin what it calls Amhara culture remnants. Therefore mounted on the beautiful flag a very massive emblem carrying meaningless symbol that stands like a wild beast with sharp horns calling for havoc.

We Ethiopians need better than this. We are decent, peace loving and hospitable people. Our guest President Obama deserves better.

“The India media were proud of their Guard of Honor for Obama and called it “A national pride.” In Ethiopia, we didn’t expect much as the country has been dragged through “a national humiliation” since 1991.” – Ethiomedia.com