THE 35th anniversary of the National Union of Eritrean Women (NUEW) has been celebrated  in Oakland, California yesterday (14) in the presence of NUEW delegation to the UN led by Ms. Tekea Tesfamichael and friends of Eritrea in Oakland and its environs.

On the event, friends of Eritrea and invited guests toured a photo exhibition showcasing the achievements of Eritrean women during the past 35 years.

The pictures depicts women in the nation building struggle both in the past and after the struggle along with the various paintings on Eritrea by the Oregon based renowned American artist Betty LaDuke.

On the occasion, the City Council of Oakland congratulate the NUEW for their perseverance through difficult struggles and their many achievements in fighting for emancipation, equality and empowerment for Eritrean women.

In recognition to that President of the Oakland City Council, Hon. Lynette Gibson McElhaney, awards a Commendation Certificate.

Similarly, Honorable Congresswoman Barbra Lee, U.S. House of Representatives from the 13th Congressional District, also awards a special Congressional Recognition certificate to NUEW honoring the outstanding commitment and dedication the Union undertake to improving the status of Eritrean Women across the United States.

Both U.S. government officials congratulates the NUEW on its milestone anniversary and send their best wishes for continued success in the future. 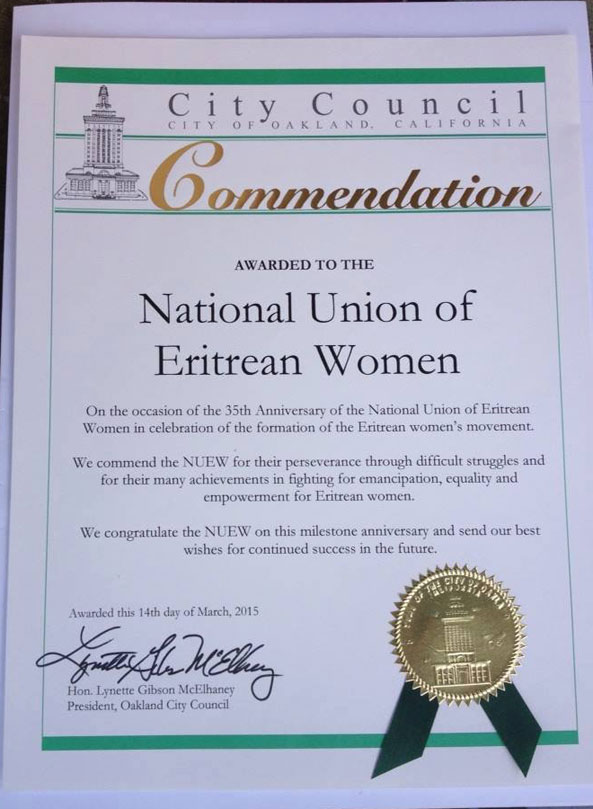