BY THE VALUE PORTFOLIO | SEEKING ALPHA

Nevsun Resources (NYSEMKT: NSU) is a mining company with a market cap of $0.7 billion that has had a difficult time recently. However, as we will see throughout this article, strong market fundamentals, along with the company’s impressive distribution of assets and growth potential from its Timok Project, make the company a strong investment at the present time.

Copper and zinc markets have both had an incredibly difficult time since the start of the commodity crisis in 2011.

Copper prices dropped from a peak of more than $4 per pound in 2011 to less than $2 per pound at year-end 2015. However, starting in late-2016, the market’s copper price began to recover to present prices of more than $2.5 per pound.

Given that a significant portion of Nevsun Resources’ income comes from the 10-20 million pounds of annual copper it produces at roughly $1 per pound, a 50% increase in copper prices means an additional $7.5 million in profits annually, a lot for $0.7 billion company.

On top of that, scrap, or recycled copper, a major source of new production, has decreased in 1Q 2017. This can be attributed to more efficient copper usage in modern electronics which is harder to recycle and reuse. This, combined with continued strong demand in China and increasing demand in Europe / North America, means that prices should continue to recover.

This recovery in copper prices will continue to support Nevsun Resources’ profits. 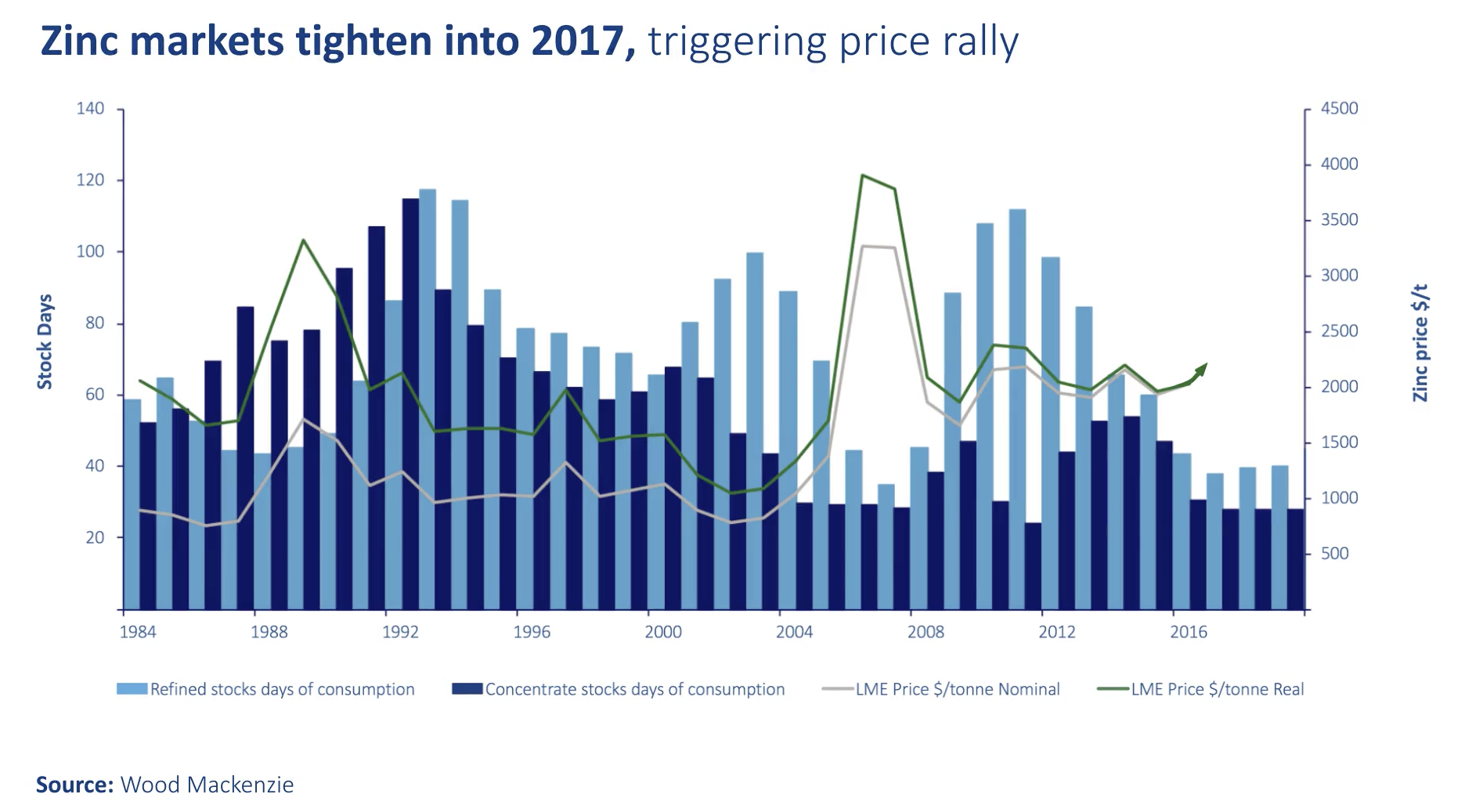 Along with a recovery in copper markets, the zinc markets have begun to tighten which has supported prices recently. Zinc prices also have been increasing rapidly from less than $1 per pound to more than $1.2 per pound recently as the markets have tightened. 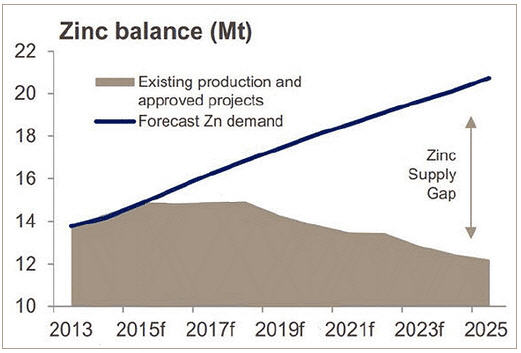 As we can see, zinc and copper markets remain strong and should support the long-term profits of Nevsun Resources.

Now that we have discussed the zinc and the copper markets, it is now time to continue discussing Nevsun Resources’ impressive distribution of assets, the next part of my thesis for Nevsun Resources. 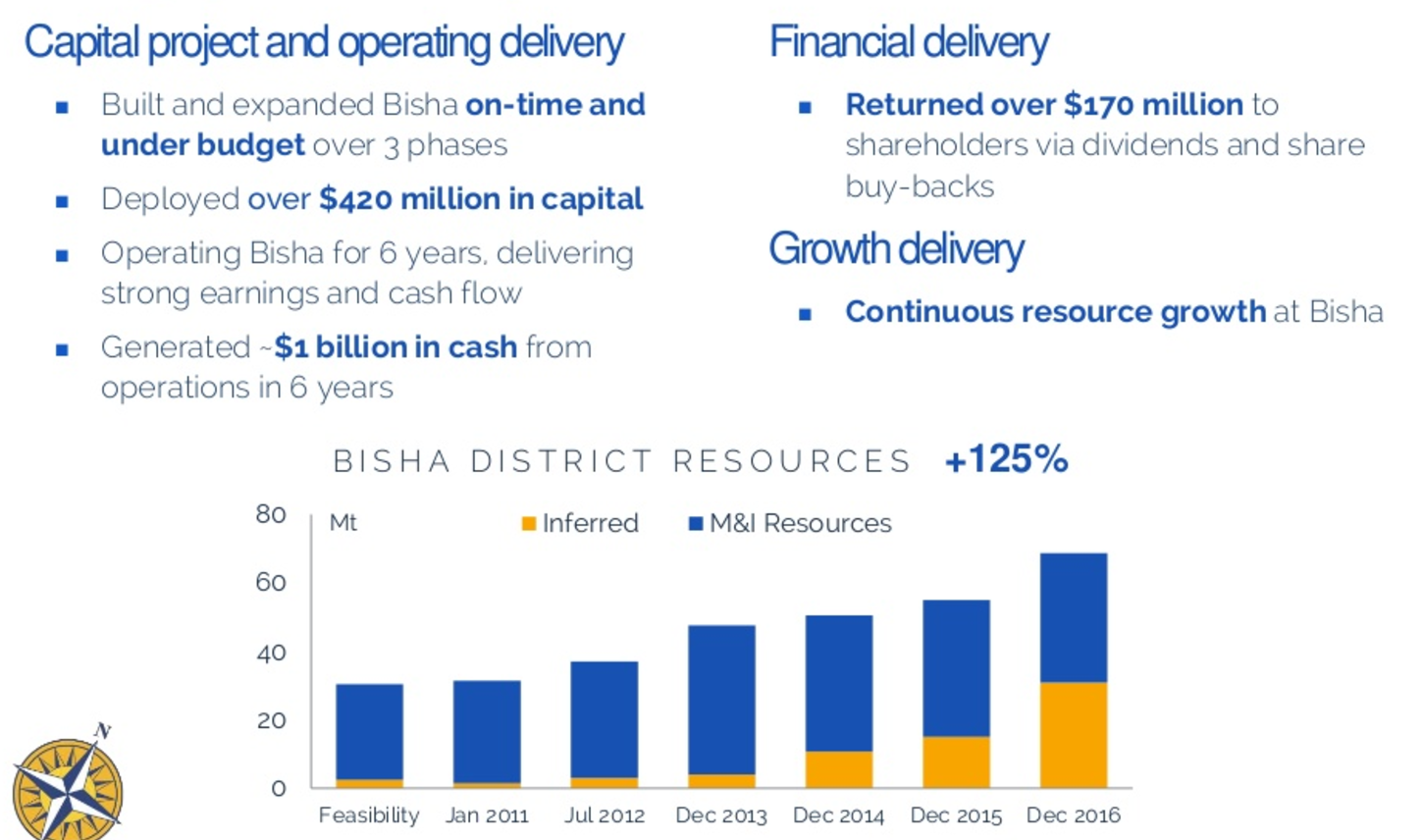 Nevsun Resources has deployed $0.42 billion in capital on its only asset that is currently producing, the Bisha Mine. The company has developed the Bisha Mine on-time and under-budget over three phases with the most recent being the company’s recent Zinc plan. That has allowed this mine to generate an astounding $1 billion in cash over six years, incredibly impressive for a $0.7 billion company.

Now that the development phase is over, the profits from the Bisha Mine should begin to increasingly reward Nevsun Resources’ shareholders.

More importantly, Nevsun Resources has consistently increased resources in the Bisha Mine. Resources in this region have increased from 2010, with the feasibility study, by more than 125% to December 2016. This more than doubling of resources, on top of production from the mine, means that Nevsun Resources Bisha Mine should continue producing for much longer than its mine life without costing it additional capital. This should help long-term profits.

For starters, the Timok Project is centered in Serbia, a country that will provide Nevsun Resources with strong federal support. Serbia is committed to increasing the GDP contribution of mining from 2% to 5% by 2020, and this will require new projects. The company’s low 15% corporate tax rate and inexpensive energy costs along with its relative stability show the strong fundamental location of the Timok Project.

That means that once production starts, Nevsun Resources will be producing roughly 140 kilotons of resources at 13.5% copper and 10.4 grams / ton gold. That means that this production, from the company’s indicated resources alone, should provide the company with $153 million in annual revenue. Assuming a 50% profit margin, similar to Nevsun Resources’ profit margin at the Bisha Mine, that would mean more than $75 million in annual profits.

That means the company’s profits alone, from just the Timok Project, in four years, should give the company an incredibly low P/E ratio of 10. That does not count any continued earnings from the Bisha Mine, the Timok Project Lower Zone, nor any success with the inferred resources. Not bad, in terms of profits, for holding onto the company’s stock for a few years.

The Timok Project also has the massive Lower Zone which Freeport-McMoRan (NYSE: FCX) has a 54% stake in after the completion of the Upper Zone feasibility study. The Lower Zone is a zone several times the size of the massive Upper Zone with extensive copper-gold mineralization and the potential to be a world scale project.

Nevsun Resources is undergoing $20 million of drilling in early 2018 to further investigate mineralization. I will update you guys with the results of this drilling which should provide a much better estimate of the value of these assets of Nevsun Resources.

Nevsun Resources has had a difficult time over the past year. We have watched the company’s stock price drop from a high of more than $3.5 per share to present prices of less than $2.5 per share. The company cut its dividend to save cash for drilling and spent a significant portion of its capital strength and diluted its share count to acquire Reservoir Minerals.

Despite this, for three key reasons, I still feel that Nevsun Resources is an impressive investment at the present time.

First, the commodities market crashed heavily after 2011. However, the market is well on its way to recovery, and growing demand, especially for copper, should help this recovery to continue.

Lastly, Nevsun Resources’ new Timok Project has incredibly impressive resources. This should provide the company with long-term growth in cash flow and enable it to grow its dividends significantly.

As a result of these three reasons, I recommend investors purchase Nevsun Resources stock immediately with the intention of holding it until 2020 onwards.