BY THE VALUE PORTFOLIO | SEEKING ALPHA

Nevsun Resources (NYSEMKT: NSU) is a Canadian mining company headquartered in Vancouver, British Columbia. The company has had a difficult time since the start of the commodity crisis, however, as we will see in this article, Nevsun Resources’ track record, impressive assets, and strong financials, along with the overall commodity markets make it my top mining pick for the next five years.

Nevsun Resources has had an impressive track record of completing profitable projects ahead of time and under budget.

The Bisha Mine was a significant project that shows Nevsun Resources track record of success. I am impressed by Nevsun Resources ability to do something that many other companies don’t manage to do on their projects. And Nevsun Resources turned these profits into rewarding shareholders for sticking with the company. It will be exciting to see if the company can also do this with its upcoming Timok Mine Project. 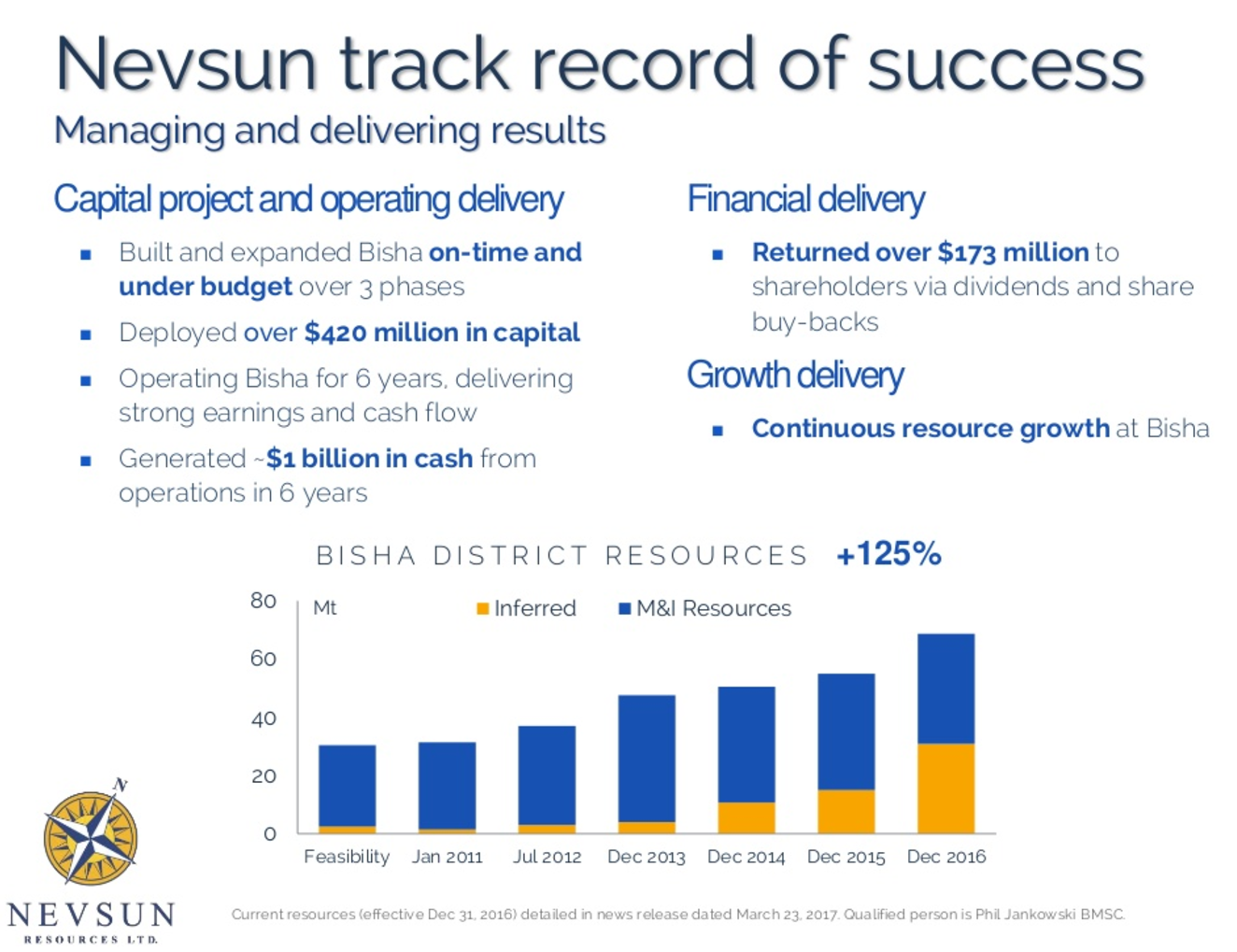 Nevsun Resources, through its Bisha Mine and Timok Project assets, has an impressive portfolio of strong assets.

Nevsun Resources’ impressive Timok Project development, which it acquired last year through Reservoir Minerals, is based in Serbia. Serbia is a country with strong support for its mining operations, which is determined to more than double the GDP contribution from mining. As a result, the company has no restrictions on foreign ownership of mines with a 15% corporate tax rate along with a 5% net smelter return royalty on Copper and Gold metals. 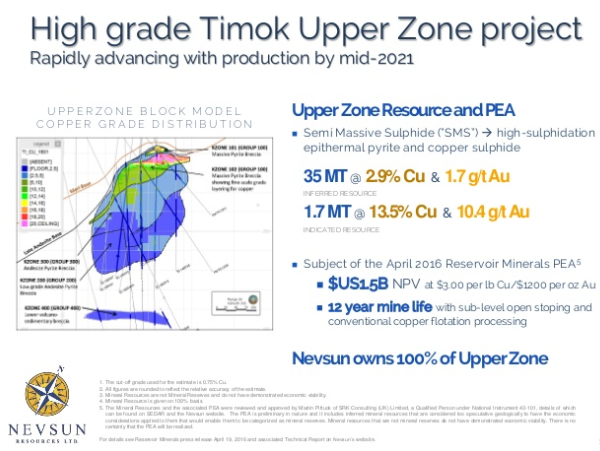 On top of this support for growth, Serbia is an experienced mining jurisdiction with low energy costs. As a result of this, a number of other major miners are operating in Rio Tinto (NYSE: RIO) and Freeport-McMoRan (NYSE: FCX). For the Timok Project specifically, the mine is 5 km away from Bor, a 40 thousand person mining town that provides a significant skilled workforce for Nevsun Resources.

Nevsun Resources, including me, initially responded negatively to the acquisition of Reservoir Minerals. The acquisition was expensive to begin with, and that was before Nevsun Resources sweetened the offer by $75 million. However, I’ve come around to the deal and the resources that it provides. I think that Timok Project has the potential to significantly increase Nevsun Resources future earnings, and the market currently isn’t taking that into account.

I anticipate the market to reevaluate this decision in the coming years.

As we can see here, Timok Project’s lower zone is several times bigger than the company’s upper zone. This lower zone is a well spread out porphyry deposit with significant copper-gold mineralization and block cave mining potential. This mine has the potential to become a world scale project, a project so significant that after the upper zone feasibility study is completed, Freeport-McMoRan is a 54% joint venture partner for the lower zone.

Nevsun Resources plans to complete $20 million of drilling by early 2018. I’m looking forward to this study to seeing the true potential of this resource. Timok Project’s next step is to complete a preliminary economic assessment in 2 months with decline development started at the end of the year. As a result, the company anticipates $40 million in spending this year and production starting in 2021.

Despite this, Nevsun Resources stock had a difficult time after earnings last week, when it delayed the feasibility study for the Timok Project by two quarters. While what this means is unknown, it will be interesting to see the results of the Timok Project in the next six months.

Moving on to Nevsun Resources Bisha Mine, its core asset and the only one producing at the present time, we can see that the mine’s primary asset has 9.58 kilotons at 1.05% copper and 6.16% zinc. The company is currently drilling in satellite deposits with $3 million of budget for the rest of the year with the goal of extending the mine’s life. The mine has had significant resource growth since 2012 that is anticipated to continue.

It will be interesting to see what happens at the Bisha Mine with these resources. The mine still has respectable reserves worth hundreds of millions of dollars that should provide long term profits for Nevsun Resources. Since the feasibility for the mine was completed, the resources in the Bisha Mine have doubled despite continued production from the region.

This shows how the region will be able to continue generating resources and profits for years to continue.
Nevsun Resources Strong Financials

So far, we have discussed Nevsun Resources’ impressive track record and assets, let’s continue by discussing the company’s strong financials.

Nevsun Resources only current producing asset, the Bisha Mine, anticipates 2017 production of 190-210 million pounds of zinc and 20-30 million pounds of copper valued at $330 million in the present market. The company also has an additional $15 million of stockpiled gold to sell. That means that the company can anticipate total revenue for 2017 of $345 million. Not bad for a $700 million company.

While the majority of these earnings will go towards other expenses, this helps to show how undervalued Nevsun Resources is at the present time off of its earnings. 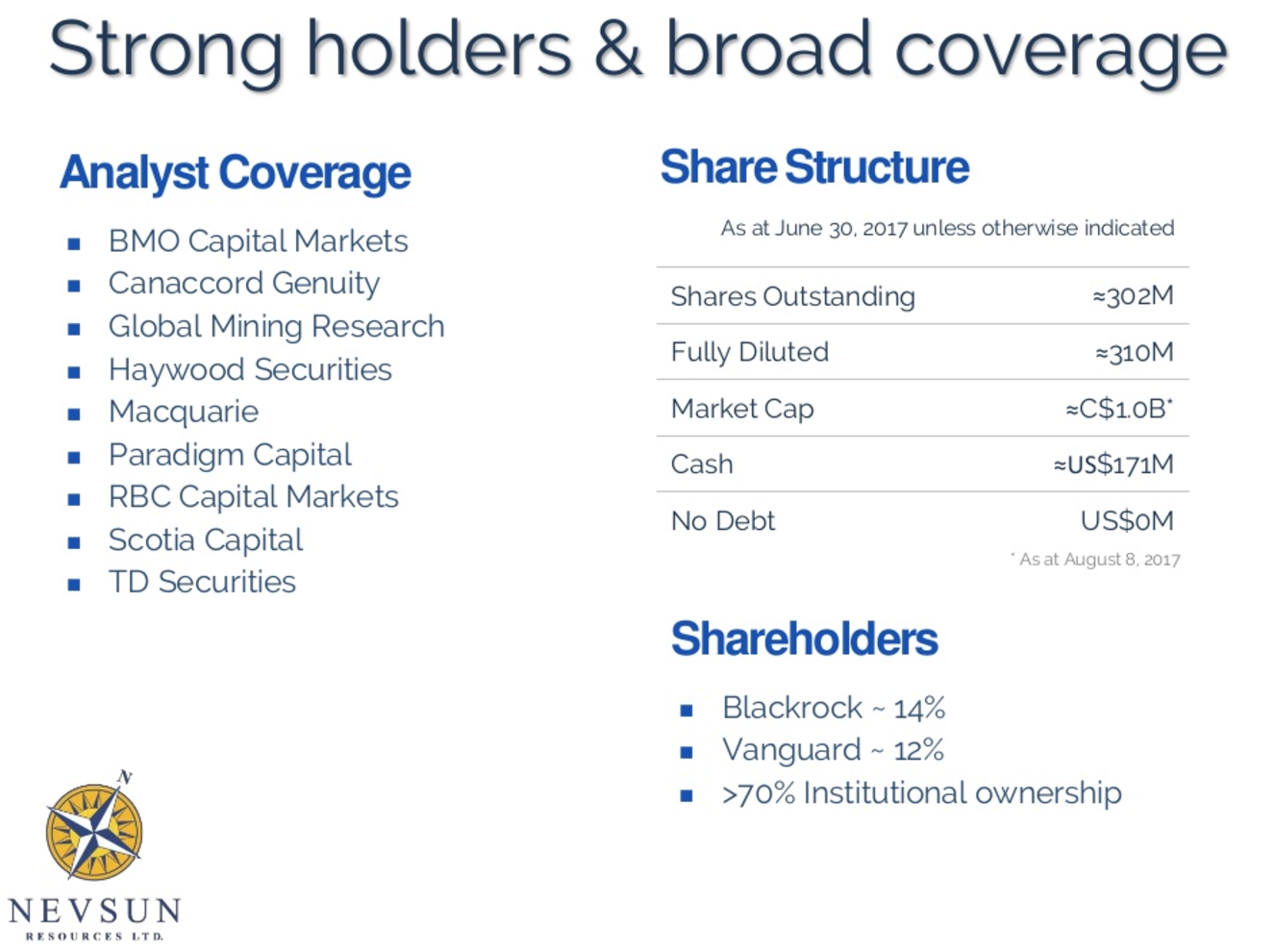 Looking at the specifics of Nevsun Resources’ shareholders, we see that the company has solid analyst coverage. More than 70% of the company is owned by institutions with 14% owned by Blackrock and an additional 12% owned by Vanguard. This shows how major institutional investors believe that Nevsun Resources is an undervalued investment at the present time with significant growth potential.

As of June 30, 2017, Nevsun Resources had 302 million shares outstanding with 310 million fully diluted shares. That comes out to a market cap of $1 billion Canadian dollars, which has since dropped to roughly $600 million USD for the company. Out of this portfolio, the company also has absolutely no debt and $171 million of cash. This significant cash pile shows how the company has the finances to continue operating for years to come. 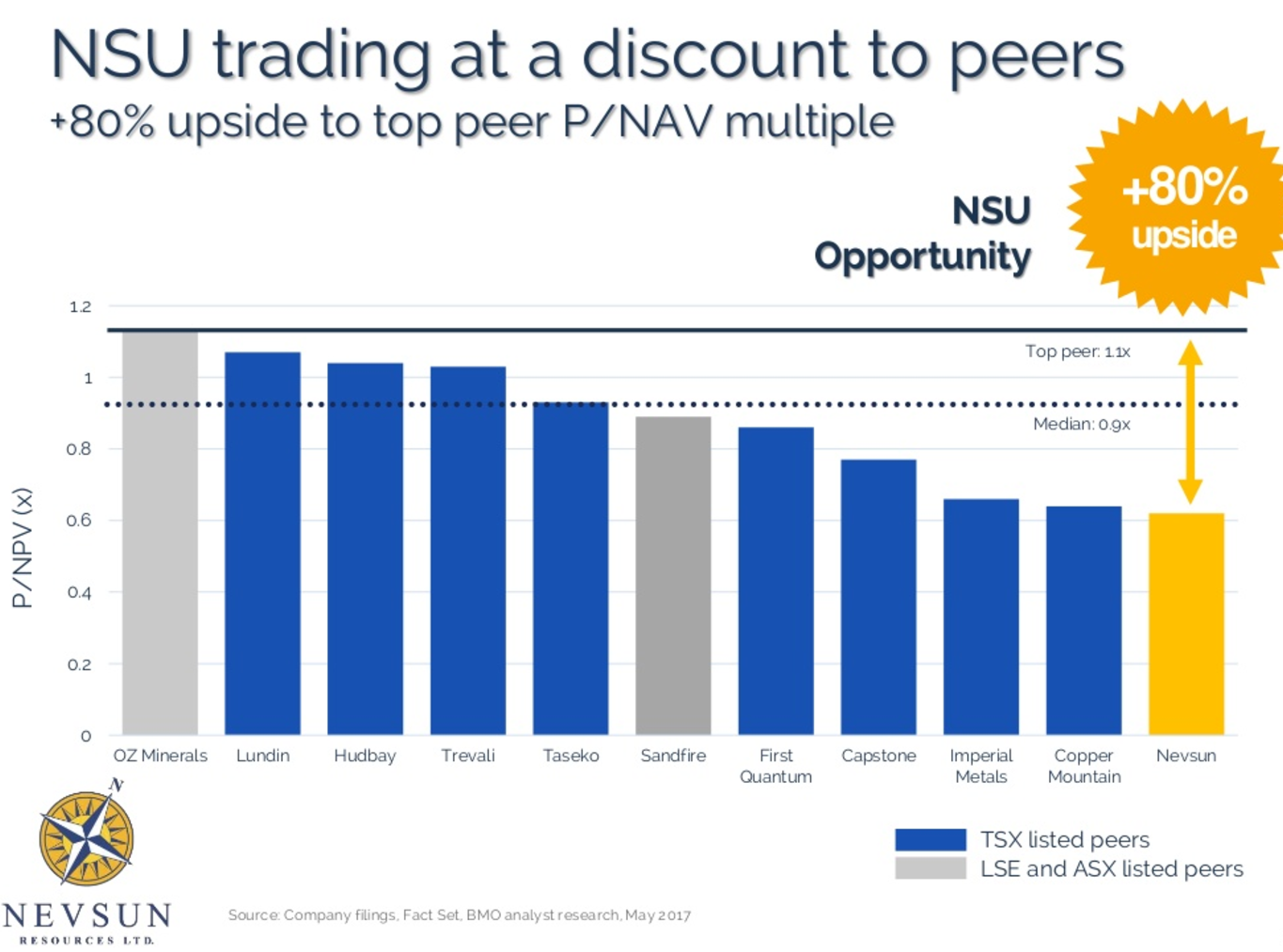 This shows how undervalued Nevsun Resources is as the present time compared to its peers. And on top of this, we can see Nevsun Resources’ strong financials with no debt and a strong cash pile to continue operations for years to come, even as it spends money on expanding its Timok Project.

Nevsun Resources’ incredibly impressive track record, assets, and finances, will all be supported towards future profits, with the recovering commodity markets.

Zinc, one of the most significant assets of the company’s Bisha Mine, and is anticipated to see demand skyrocketing in the coming years for a variety of projects. However, supply is expected to keep up, even with secondary mine and new projects. The main reason for this is that uncommitted projects have faced increasing amounts of delays decreasing their anticipated supply by almost 50% in the coming years.

We all saw with the mid-2014 oil crash how quickly a slight surplus in production can causes prices to crash. Similarly, a slight deficit can cause prices to skyrocket, and we should be seeing that in the zinc markets in the coming years. That should support a rapid rise in profits which will provide significant income for Nevsun Resources.

This income could be paid out either through the company’s dividend or through additional investment in the Timok Project.

Similarly, copper demand is anticipated to continue growing over the long term, with new mines and highly profitable projects not making up for the demand. Starting in 2019, a deficit will begin to open up which should support a recovery in copper prices. This deficit will require 4-6 million tons of new copper capacity by 2025, capacity that does not exist from current projects.

This deficit will support a rapid rise in copper prices, providing significant income to Nevsun Resources from both its Bisha Mine and from its Timok Project when it comes online. This shows the long term potential that the commodity markets have.

Nevsun Resources has had a difficult time, not only over the past few years, but also since its last earnings announcement. Despite that, the company is still an amazing investment, and my top mining investment choice for the next five years. The company has a strong history of rewarding shareholders, an impressive asset portfolio, and strong financials.

More importantly, all of this comes in the midst of a recovering market. Some of the company’s biggest assets, its zinc and copper assets, are expected to see a supply deficit in their markets soon. This supply deficit should support increased prices which should provide even more profits for Nevsun Resources. This combined with the Timok Project coming online should be enormous drivers in Nevsun Resources’ earnings in the coming years.