Our presenters today are Peter Kukielski, Nevsun’s President and Chief Executive Officer, and Ryan MacWilliam, our Chief Financial Officer. Following the conclusion of formal remarks by Peter and Ryan, we will host a question-and-answer session.

And now, I’d like to turn the call over to Peter. Peter?

Thank you, Heather, and thanks to everyone for joining us on today’s call. 2017 can best be described as a year of transition for Nevsun. Much has been accomplished to reset our Company for delivery in 2018 and beyond as we continue down earth to become a multi-mine mid-sized based metals company.

Our mantra in 2018 is delivery and the work we did in 2017 has helped us set a foundation for delivery. I am especially pleased to affirm that our engagement with the Government of Serbia has paid off. Together we work intensely and productively in order to gain a deeper understanding of permitting requirements and you would have seen that we announced yesterday a major project milestone in the receipt of our Exploration Decline Permit.

The granting of this permit is the first of its kind under the recently modernized Serbian mining code and has positioned Nevsun as one of the most important investors in the Serbian mining sector. I am proud to have pioneered this effort with the Serbian site.

At Bisha, the rethinking of our approach to mining investment has positioned us to generate more reliable and predictable cash flows over the remaining life of mine. These cash flows will help maintain an already strong balance sheet and will be critical in supporting the ongoing development of our extraordinary Timok Project in Serbia.

We have made significant progress in optimizing operations at Bisha. The capital investment and management time spent on Bisha gives us confidence that we will see improved results going forward. In coming weeks, we will have an updated Reserve and Resource Statement at Bisha which will only include materials from the Bisha Main pit and the satellite Harena pit.

Additionally, we continue to explore with our partners in Eritrea ways in which we might be able to lower our overall cost profile at Bisha, which could support mine life extension. We are also conducting further work at satellite deposits which could potentially be added to reserves in the future.

Another key part of our transition in 2017 was the reshaping of our senior management team. I had the privilege of being appointed to this role in May of last year. Since then, I’ve streamlined the structure of our executive team with the elimination of the Chief Operating Officer role.

With that change, two seasoned executives have joined us and report directly to me, with one overseeing the Timok Project and the other responsible for operations at Bisha. I will talk more about them and their backgrounds a little later in the call but want to reiterate that this flatter structure is more efficient and allows for greater focus on our two main assets. And of course, we also added a new CFO, who is here with me today.

Now, let me briefly discuss our operational performance for the year. I’ll keep my remarks very brief as we already released our 2017 operating results and Ryan will provide some explanations of the operational impact on our financial performance.

Now, I’d like to turn the call over to Ryan MacWilliam for a review of fourth quarter and full year financial performance. Ryan?

Thank you, Peter. I will begin by discussing our fourth quarter performance. At Bisha, we undertook a series of activities that will contribute to stronger future operating performance, but which resulted in weaker financial results with net income of $2.2 million in the quarter.

Specifically, we completed the squaring up of the pit to allow for increased access to primary ore in 2018. The focus on waste movement led to a higher strip ratio of 13.8 in the fourth quarter, compared to 7.8 for the full year. It also led to a reduced supply of primary ore feed, necessitating additional processing trials of boundary ore stockpiles. These stockpiles, now referred to as zinc-only stockpiles, we treated successfully for zinc recoveries but resulted in higher reagent costs due to increased lime usage to control pH levels. 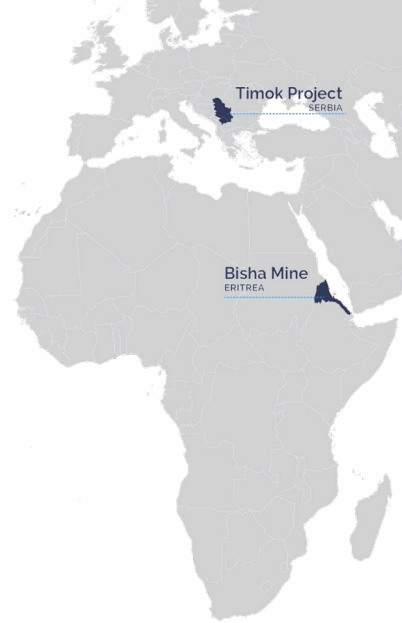 These events contributed to abnormally low copper recoveries and higher costs for the fourth quarter, with C1 cash cost per pound of zinc on a by-product basis of $1.13 for the quarter compared to $0.88 for the full year.

We forecast lower C1 cost per pound of zinc of between $0.60 and $0.80 in 2018 due to reduced stripping requirements and increased availability of primary ore feed. It has been very pleasing to see the continued improvement in recovery so far in 2018, as we process exclusively primary ore and trial new reagents.

Although the processing of the zinc-only stockpiles resulted in higher costs, it did highlight our continued ability to successfully and economically recover zinc from these stockpiles in the second half of the year. As a result, we have reversed the previous impairment taken on the remaining high and medium-grade portions of the stockpiles. This resulted in an impairment reversal of $13.1 million related to stockpiles as at December 31. This combined with the impairment reversal of $6.5 million on material that was successfully processed during the second part of the year to result in a total reversal of $19.6 million. The remaining impairment of $32.1 million taken on low-grade and high zinc-only stockpiles was not reversed as it is not economic to process these stockpiles at current zinc prices.

2017 was the first full year of Timok being included in the Company’s financials. This resulted in a significant increase in the exploration and evaluation expenditures, as we completed an extensive drilling program. Our mid-tier mining peer-set take one of three accounting approaches to these exploration and evaluation expenditures. They either entirely capitalize them, entirely expense them, will expense them until a point when there is an increased level of confidence in the viability of the mineral resource.

We have decided to change our accounting policy to move us from the first group to the third group, as we will now expense all exploration and evaluation expenditures until we declare an initial reserve. The group with which the Company’s new policy aligns is generally comprised of larger mining companies, which is consistent with Nevsun’s growth following the Timok acquisition.

This change in policy results in $50.8 million of operating expense in 2017 that would have been capitalized under the previous policy, with the majority of the spend incurred at the Timok Project. The impact of this policy change in 2018 financials will be markedly less than in 2017, as Timok expenditures will again be capitalized following the initial reserve declaration.

This new policy does not change our conviction that we are fortunate to be developing a project on a world-class ore body with outstanding economics. Rather it reflects the opportunity that with the development of Timok, Nevsun will have a set of larger, more established mining peers, and therefore we want to adjust our accounting policies accordingly.

I now want to review the 2017 full year financial performance. Revenues were $289 million, a 25% increase from 2016. As you can see on the slide, the ramp up of the zinc plant and strong zinc prices resulted in zinc share of revenue increased from 10% in 2016 to 78% of revenue in 2017. Due to this increased share of revenues, we will now disclose zinc C1 cost with copper on a by-product basis going forward.

In earnings from mining operations, decreases in copper volumes in 2017 were more than offset by increases in zinc volumes and prices. However, 2017 earnings finished lower than 2016 due to the absence of DSO sales, the previously mentioned $49 million impairment, and higher operating expenses. The increase in operating expenses reflects both the cost of running the zinc processing circuit and higher strip ratios, but also reflect that 2017 was a transitional year in terms of both mining and processing activities.

2017 saw an increased $29 million of capital expenditures at Bisha, with $8 million on the tailings facility expansion project and $18 million of sustaining capital. The sustaining capital predominantly consisted of heavy mining equipment purchases, which have now improved the mine’s ability to move material. 2018 cash flows will benefit from a 48% decrease in capital expenditures at Bisha, with the guidance of $15 million for the year.

At Timok, $16 million of the required $20 million spent on the Lower Zone was completed in 2017, with only $1 million remaining to be spent in 2018. This reduced spending on the Lower Zone will partly offset the planned increase in Upper Zone spending of $50 million to $60 million in 2018. Of this, $15 million will be spent on exploration decline, following the recent receipt of the decline permit.

In exploration, our spend at Bisha will decrease from $9 million in 2017 to $7 million in 2018. At the same time, we will spend $5 million on a new Timok Brownfield exploration program. This will allow us to build on the promising exploration results announced last month with the discovery of a new high-grade copper-gold mineralization 500 meters east of the Timok Upper Zone. This spend is further supported by the knowledge that at the Bor deposit, only 5 kilometers to the north of Timok, approximately 144 million tons of massive sulphide mineralization was mined from 27 separate ore bodies.

So, the reduction in capital spend at Bisha, the ramp-down in Timok Lower Zone spending, and strong expected operating cash flows from Bisha, will maintain Nevsun’s strong balance sheet, which will be used to fund the Timok Project.

Additionally, through the last quarter we’ve held discussions with potential project finance lenders, particularly European commercial banks and development finance institutions. These lenders have expressed a strong interest in financing the Timok Project, with the indication that they would loan between 50% and 60% of the project’s capital. The high front-end loaded operating margins of the project and the resulting 1.5 year payback period are features that are particularly attractive to these lenders. Discussions will be further advanced following the release of the Timok PFS in the first quarter of 2018.

So, 2017 was a tough year for Nevsun’s financials, but we are confident that we have laid the foundations at both Bisha and Timok for strong operating and financing cash flows in the coming years. With that, I will hand back to Peter.

Thanks Ryan. As noted earlier, let me provide a short summary of the changes made to our senior management team. Following that, I’ll conclude with a quick overview of Timok and then we’ll be happy to answer your questions.

To continue reading the rest of the transcript, please click HERE