Especially, the high copper production is a very nice surprise, as the company has encountered some severe issues with copper recoveries over the last two years since the processing of the primary ore began. 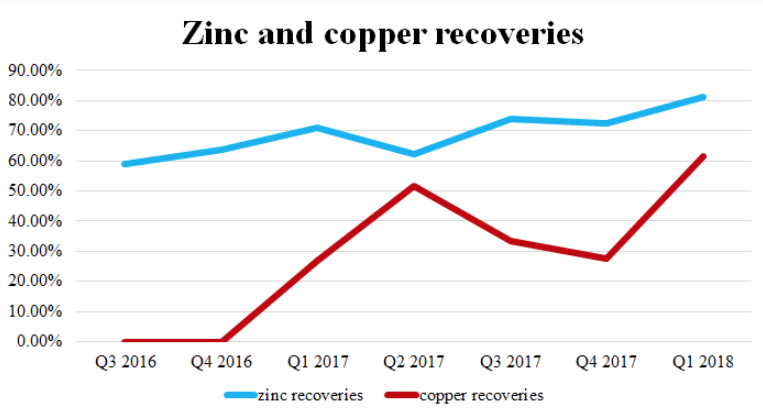 As shown in the chart above, zinc recoveries, as well as copper recoveries, climbed to the highest levels since 2016.

Zinc recoveries crossed 80% level for the first time since the processing of primary ore from Bisha deposit began. The same can be said also about copper recoveries and 60% level. 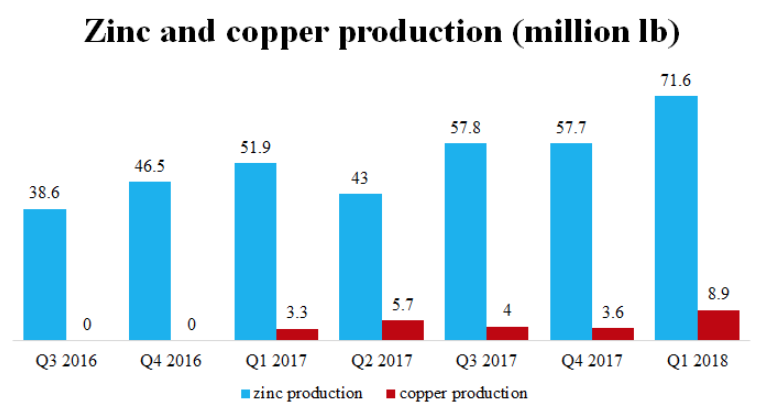 Although management tries to be conservative, the news release indicates a potential revision of the guidance. This time, it should be to the upside:

The Company is currently installing upgrades on the plant that, once completed in Q2 2018, will allow for consistent application of the revised reagent scheme which is expected to significantly improve both copper recovery and copper concentrate grades going forward. As a result of the improved recoveries, Bisha is currently tracking toward the higher end of 2018 production guidance and toward the lower end of cost guidance. Based on this performance, the Company is confident that it will achieve 2018 guidance. Guidance will be reviewed if the modified processing approach results in a sustained improvement in recoveries over a more extended period.

But the news release contains another interesting hint that is a little drowned in the text. Nevsun’s CEO stated:

The improvements also support the work we are doing on potentially extending the mine life beyond the current plan.

Back in August 2017, Nevsun shocked the markets by cutting Bisha mine life from 8 to 4 years. Now, it seems that the notably improved recoveries forced the management to reconsider the options and to start thinking about a potential expansion of the 4-year mine life. Such an outcome would be a great news for the shareholders, as in this case, Bisha could provide more cash to fund Timok mine development.

The improved recoveries and increased production volumes had a very positive impact also on the financial results. C1 cash costs, net of by-product credits, equaled to $0.58/lb zinc, which compares favorably to cost guidance of $0.6-0.8/lb.

At the current pace, Nevsun could end this year with cash of approximately $225 million, which is a very good news, given that around $700 million is needed to get Timok Upper Zone mine into production.

If Bisha generates enough money, Nevsun will be able to secure a debt financing at better terms, and it may be also able to completely avoid the equity financing.

After a series of disappointments, Nevsun’s Eritrean mine finally brought some positive news. The zinc and copper recoveries have improved notably, and according to the news release, the management believes that further improvements are likely to occur as soon as in Q2. Improved operating efficiency of the Bisha mine is a very good news, as Nevsun will need the cash generated at Bisha to finance the development of its world-class Timok Upper Zone mine. Q1 2018 results may indicate that Nevsun’s dark era is finally over. However, it is important to note that at least another quarter or two are needed to confirm that the metallurgy issues are finally overcome.