Nevsun Resources Ltd. (TSX:NSU / NYSE MKT:NSU) (Nevsun or the Company) is pleased to report its financial and operating results for the three and six months ended June 30, 2015. Unless otherwise noted, with the exception of earnings per share and realized price and cost per pound figures, all financial results are in millions of US dollars.

“Despite copper price declines and some planned and unplanned plant stoppages in Q2, we had another quarter of strong earnings and free cash flow generation. The sale of the precious metals concentrate and a focus on cost control made a significant contribution to our bottom line. We are pleased to report our overall cash balance increased during the quarter even with a weaker quarter of copper production and significant capital spending on the zinc expansion, which remains on-time and on-budget.” 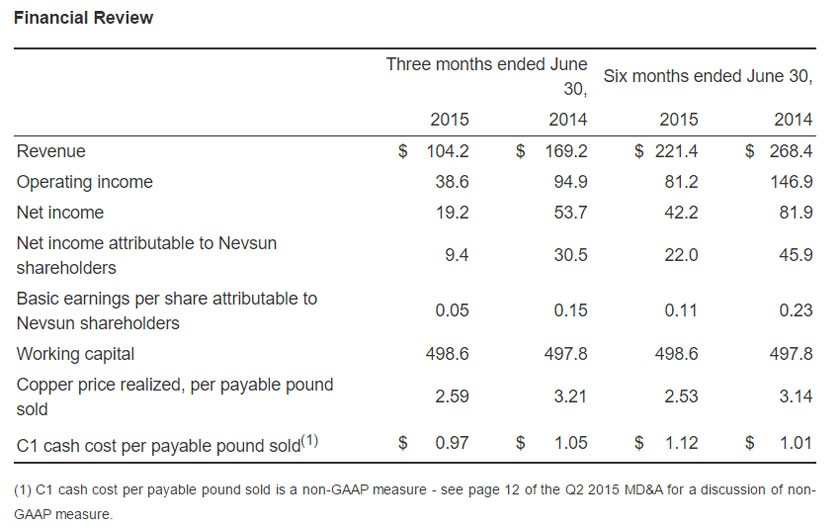 Cliff Davis went on to say,

“Due to the unplanned plant stoppages in 2015 we are revising our 2015 guidance to 140 to 150 million pounds for 2015. However, our cost outlook has significantly improved and we are pleased to report that we are maintaining our C1 cash costs per payable pound of copper guidance of $1.20 to $1.40 despite the lower production, ensuring another profitable year for our shareholders.

For the longer term outlook, I am really pleased with the continued exploration success and that the zinc expansion remains firmly on track and on budget. We are maintaining maximum optionality for zinc offtake which remains 100% uncommitted. We expect further exploration results from Bisha regional drilling throughout 2015 and are increasingly optimistic the current commodity price environment will generate M&A opportunities.”