Shares of Nevsun Resources (NYSEMKT:NSU) declined sharply, after the Q4 2016 earnings release. On Friday, shortly after the markets opened, Nevsun’s shares hit a low at $2.34. It is just shy of the multi-year low of $2.27, reached in January 2016. The share price managed to recover slightly and it closed at $2.72, which is close to the support level created during October 2016.

Despite the recent mixed news, the company remains undervalued. It is a good time to initiate a new position, or to accumulate more shares, although the price weakness may continue in the coming weeks.

Let’s start with the bad news. There are still some issues with the copper circuit at the Bisha mine. As a result, the company expects much lower copper production. Only 10-20 million lb copper should be produced in 2017, which is much less than projected by the previous production plan. Originally, it was projected that approximately 50 million lb copper should be produced at Bisha this year.

Although the management tries to sound positive and it claims that the objective is to achieve production of 40-50 million lb copper per year (starting in 2018), the statements regarding the copper concentrate are very cautious:

As previously disclosed, in Q4 2016 Bisha was able to produce a bulk concentrate in the copper circuit but was unable to consistently produce a saleable copper concentrate. However, there has been more recent success in producing a saleable concentrate in early 2017 after various plant modifications and procedural changes, and progressive learnings from the recent geo-metallurgy program over the past 4 to 5 months.

While no definitive sustainable solution has been achieved as yet, the ongoing test work by Bisha management and two separate external specialist companies continues to facilitate improvements in the overall approach to processing the variable ore that has been encountered thus far during the primary phase.

Progressive improvements in copper concentrate production are expected throughout the year which allows for some upside, and Bisha will plan in future years to produce the feasibility levels of copper and zinc concentrates.

The next bad news is that the dividend was cut by 75%, to $0.01. As a result, approximately $120 million should be saved over the next 4 years. The money should be used to fund the Timok project development. It is a bad news for the dividend investors, and it definitely helped to push the share price dramatically lower. 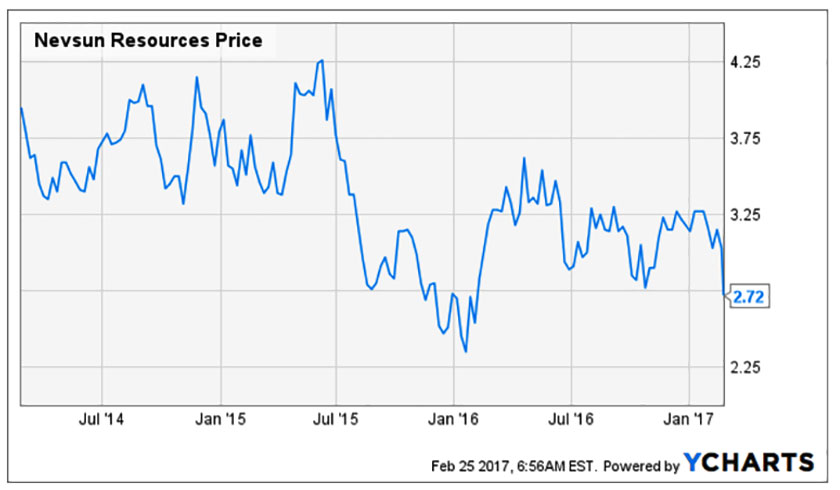 On the other hand, it is a good news from the long-term point of view, as the 100%-owned Timok Upper Zone is the future of Nevsun Resources. The CapEx of the Timok Upper Zone project is only $213 million, according to the PEA. The dividend cut should be able to fund more than 50% of this sum.

As of the end of 2016, Nevsun held cash & cash equivalents worth $199.256 million. Thanks to the dividend cut, Nevsun should be able to fund the Timok mine construction and the vast exploration programs from internal sources, which is great.

According to the older estimates, production of approximately 50 million lb copper and 160 million lb zinc was expected in 2017. It means revenues of $339 million, using the current metals prices of $2.68/lb copper and $1.28/lb zinc.

Using the middle of the ranges provided by the newest production guidance, 15 million lb copper and 215 million lb zinc should be produced. As a result, the revenues should climb to $315 million. Yes, it is less than originally expected, but it is not a disaster.

Another positive news is that the Timok Upper Zone PFS is still expected in September and development of a decline should start in Q4:

The Company has completed approximately half of the required decline permitting obligations to date and will begin the tendering process for the decline construction during Q2 2017. Other key Upper Zone activities, including the Environmental Impact Assessment (EIA) and land acquisition, are progressing well. Keeping the Upper Zone on track for production in 2021 is Nevsun’s top priority.

Nevsun intends to complete a VTEM survey in the Bisha region during Q1. An exploration campaign including 40,000 meters of drilling should follow. Together with its joint-venture partner, Freeport-McMoRan (NYSE:FCX), Nevsun will drill approximately 60,000 meters at the Timok Lower Zone. Further 30,000 meters should be drilled at the Timok Upper Zone and Tilva projects.

The Tilva project is a joint venture between Nevsun Resources and Rio Tinto (NYSE:RIO). Rio Tinto has an option to acquire 75% of Tilva by spending $75 million. Although the project is only in early stages of exploration, it is close to the Timok project and other historical mining operations, and it provides a lot of exploration potential, which is confirmed also by the interest of Rio Tinto. Positive drill results could provide a nice boost to Nevsun’s share price.

The Current Valuation of Nevsun Resources

Nevsun’s 60% interest in the Bisha mine alone, with its large land package of 814 km2, is worth more than that. All of the other projects, including Nevsun’s share on the Timok Lower Zone, that will probably become one of the biggest copper deposits, and 100% of the Timok Upper Zone, that provides an after-tax NPV (8%) of nearly $1.35 billion (at the current metals prices of $2.68/lb copper and $1,255/toz), are for free.

Assuming that the Timok Upper Zone reaches its first year of full production in 2022 (assuming that the production levels and costs are equal to numbers presented by the PEA) and that the Bisha long-term production plan remains unchanged, Nevsun’s attributable production should grow to approximately 158 million lb copper, 150 million lb zinc, 70,000 toz gold and 435,000 toz silver. It means revenues of more than $700 million, at the current metal prices.

Much more problematic is estimation of the costs, as some of the information are missing. In 2017, the Bisha mine C1 cash costs are estimated at $0.7 – 0.9/lb copper and $0.9 – 1.1/lb zinc, on a co-product basis. Using the midpoint of the production and cost guidance intervals, we can come to a total sum of $227 million.

Adding to it the sustaining capital costs that are estimated at $26 million and administrative costs that climbed to $20 million in 2016, we can come to costs of approximately $275 million. Assuming that the costs will grow by 3% per year, due to the inflation, we can come to $310 million. But only 60% of this value ($186 million) is attributable to Nevsun. To be more conservative, let’s round it up to $200 million.

According to the PEA, the C3 costs, including gold credits, should be approximately $0.97/lb copper, at Timok. Without gold credits, it should be $1.57. Given that there should be 128 million lb copper produced at Timok in 2022, the total operating costs should be around $201 million. The life of mine sustaining CapEx is projected at $227 million, and the mine life should be 12 years, which means $19 million per year on average. It means that the total costs generated at Timok should be approximately $220 million in 2022. Let’s round it up to $250 million, to be more conservative.

The conservative estimates indicate that if the current metal prices prevail, Nevsun should be able to generate revenues of $700 million and total costs of $450 million in 2022. Using a 30% income tax rate, the earnings should be around $175 million, which leads to EPS of $0.58. Using a conservative P/E of 10, we can come to a price of $5.8 per share. But given that the main asset will be located in Serbia, a safe European country, and that there is also the huge Timok Lower Zone (moreover, it is possible that further discoveries will be made in Eritrea or in Serbia over the next 4 years), a higher P/E ratio should be more reasonable. At a P/E ratio of 15, we are talking about a price target of $8.7. It is 220% above the current share price.

The market reaction on the recent news was very negative. As the problems with the copper circuit have been known for some time, the selloff was probably caused mainly by the 75% dividend cut. But the dividend cut is a positive step from the longer-term point of view. Thanks to this strategic decision, Nevsun should be able to fund its extensive exploration activities, as well as the Timok Upper Zone development from its internal sources. The current enterprise value of Nevsun Resources is only $620 million, which is hardly the value of the Bisha mine, not to talk about Timok and the other projects. As the available data show, if the current metals prices prevail, Nevsun’s share price can easily attack the $10 level by 2022.