Nevsun has a License to Print Cash

In this article I’ll have a closer look at Nevsun Resources (NSU) which recently made the transition from being a gold producer to become a copper producer. I will provide my view on the company’s financial results and the status of its balance sheet, where after I will briefly discuss the outlook for Nevsun. This will result in my conclusion at the end of this article.

All images in this article were directly taken from the company’s financial statements.

> Nevsun Resources produced 112,000 gold-equivalent ounces and 48 million pounds of copper in 2013.
> The copper expansion phase has been completed and the company expects to produce between 180-200M lbs of copper this year.
> As its cash costs will be in the lowest quartile, I’m expecting a triple-digit free cash flow this year.
> Market is waiting to see how Nevsun will put its $419M working capital position to work.

My View on the Financial Results:

In 2013, Nevsun Resources produced approximately 112,000 gold-equivalent ounces and 48 million pounds of copper, which is at the higher end of the previously given production guidance of 30-50M pounds of copper. This resulted in a total revenue of $157M (the copper revenue was offset against pre-commercial production operating costs and the construction cost of the plant and thus has NOT been included in the revenue statements) and an operating income of $71.4M.

The net income attributable to the Nevsun shareholders was $12.9M or $0.06/share. 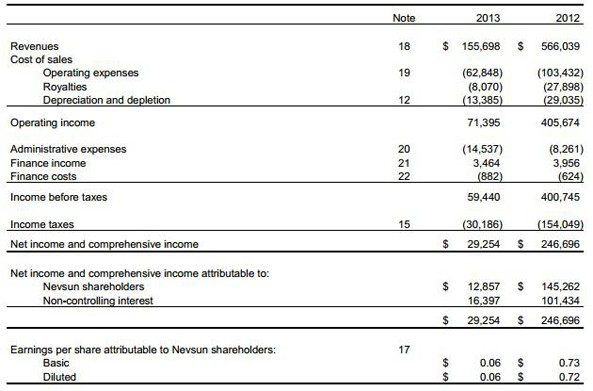 .
When looking at the cash flow statements of Nevsun, it will be quite difficult to analyze those, as the company has offset the net revenue from its copper production against the capital expenditures which were needed to build the copper phase at the project.

As you can see, the total capex for 2013 was $117.7M of which $71.3M was funded by the copper sales from the pre-production period, which resulted in a net capex of $36M. This skews the free cash flow calculation a bit, and I’m looking forward to see the financial statements for Q1 2014 which should give a better indication about the true underlying cash flows.

The capital expenditures should decrease considerably this year which should result in a free cash flow close to $100M.

My view on the Balance Sheet:

Nevsun’s balance sheet still is one of the best in the sector. The working capital position as of at the end of 2013 was $419M with a current ratio of 9.6 which is extremely high (keep in mind a ratio higher than 1 means the company has sufficient current assets to cover its current liabilities). On top of that, the company’s current assets cover the total liabilities (short term + long term liabilities) which indicates an extremely robust balance sheet. 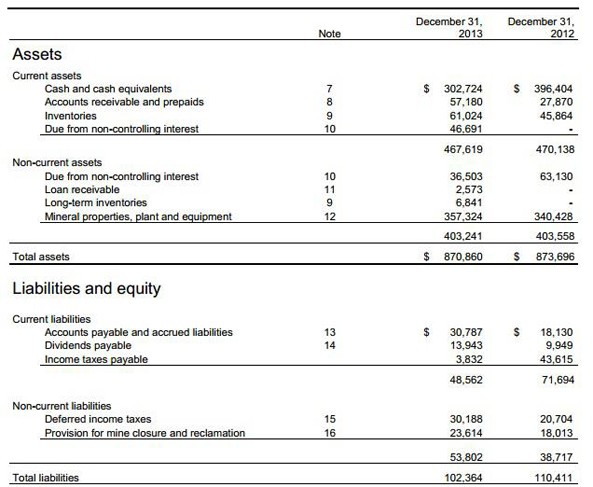 .
The book value attributable to Nevsun shareholders was approximately $3.05 which means the company is trading at a premium of approximately 16% on its book value. This is very decent given the fact that Nevsun recently announced it was able to expand the reserves and resources at the Bisha project, resulting in a longer mine life than previously anticipated.

Nevsun expects to produce between 180 and 200 million pounds of copper this year, which should generate a total revenue of approximately $550-600M. As the company still thinks it will end up in the lowest quartile of production costs, I’m expecting an operating cash flow of approximately $300M on a 100% basis.

As the capital expenditures this year will be minimal, the free cash flow generated by the Bisha project will very likely cause the company’s working capital to increase to over half a billion USD, which puts Nevsun in an extremely comfortable position to either look for acquisitions, increase the current dividend and to initiate a share buyback (or a combination of these three).

Nevsun still is in an excellent shape and seems to have digested the transition from gold producer to copper producer pretty well. No teething problems have occurred, and the company is on track to generate in excess of half a billion USD in revenue through the sale of copper concentrate.

As Nevsun currently pays a dividend of $0.14/year, the yield is approximately 4% which is one of the main reasons why I have the company in my portfolio.

The market is also expecting Nevsun to make an acquisition to keep on growing its output and diversifying away from Eritrea which is still perceived to be a relatively risky country.