Nevsun’s Bisha Mine Back On Track?

Nevsun Resources (NYSEMKT:NSU) announced Q2 production results from its Bisha mine. Although zinc production declined compared to Q1, due to lower feed grade and recoveries, copper production increased notably. The most important news, according to Peter Kukielski, Nevsun’s CEO, is that:

“We continue to see gradual improvements in the plant performance. We are now producing copper concentrate consistently in the copper circuit versus the prior three quarters where bulk concentrate was being produced.”

Although there is still a lot of room for more improvements, the main issue of the Bisha mine seems to have been resolved. Nevsun is finally able to produce not only zinc but also copper concentrate. However, the whole process still needs a lot of fine-tuning in order to get to the projected production volumes. 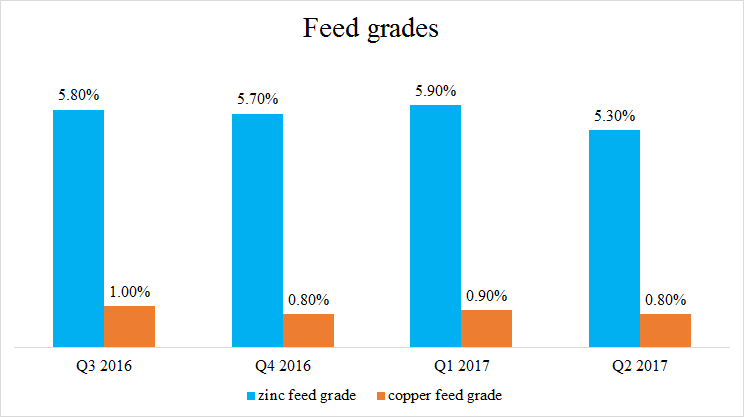 However, due to poor Q2 performance, zinc production lags slightly behind the plan. Zinc production will have to increase in Q3 and Q4 if the lower limit of 2017 zinc production guidance is reached. More information about what to expect in the second half of 2017 should be known on August 10, when the Q2 earnings call is scheduled.

Although the Bisha mine is Nevsun’s only producing asset right now, the company’s future depends especially on the Timok Project. The Timok Upper Zone PFS is still expected in September. And the Timok Lower Zone keeps on growing. On June 29, further drill results from the Lower Zone were reported.

Although the performance of the copper circuit has improved notably, the situation at the Bisha mine is still far from optimal. There are still some improvements needed in order to reach the designed production metrics. More information about what to expect from Bisha in the coming months should be known on August 10.

On the other hand, the developments in Serbia seem to be very positive. The Timok Upper Zone PFS is still expected in September, and the Timok Lower Zone keeps on providing very good exploration results. When talking about exploration, in H2 2017 too some news related to the exploration program in Eritrea can be expected.