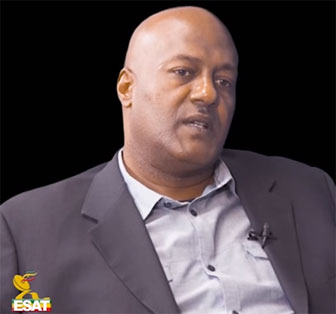 Neamin Zeleke, a member of the executive committee and deputy head of political affairs with Patriotic Ginbot 7 gave an in-depth interview to ESAT’s Sisay Agena on the weekly show “yesamintu engida” (Guest of the Week).

Neamin Zeleke shuttles between Washington, DC and Asmara to coordinate the worldwide support by Ethiopians to Patriotic Ginbot 7 in the struggle to free Ethiopia of the TPLF tyranny. The leadership of PG7 has long made Eritrea its base.

The son of a navy commander, Neamin reminiscence on behalf of his dad, Zeleke Bogale, who was credited for being instrumental in modernizing the Red Sea Ports of Assab and Massawa during the imperial era and later as the head of Maritime Transport Authority in the subsequent regime.

Asked about what it feels like to be in Eritrea, as an independent country, where his dad spent his life managing the Ports when Eritrea was part of Ethiopia, Neamin begins by saying life is full of contradictions. He says his dad, despite the damaging war at the time, was focused on the betterment of the lives of the people in and around the Ports.

Despite the fact that Ethiopia had become a landlocked country after Eritrea’s independence, Neamin is confident that once the TPLF, which Eritrea sees as a threat to the peace and security of the region as whole is done away with, there is no limit what relations based on mutual respect and benefit would bring to people on both sides.

“What Ethiopians want from Eritreans is not just simply access to the Ports. It is way beyond that. It is about people to people relationship. It is about creating bonds in economic, security and defense spheres.”

He said successive regimes got it wrong as far as handling the Eritrean question. And hence, he said, why it had seceded from Ethiopia. He went on to say that Eritrea is now the only country that supports the struggle by the Ethiopian people for freedom and democracy.

Ethiopia, Neamin says, is at a crossroads. TPLF is a destructive force that must be removed. It is the responsibility of all Ethiopians to work for the creation of a country where the individual rights of citizens are respected and rule of law prevails.

Neamin Zeleke also speaks about his role in a number of political parties since his youthful times (not that he is old now) and what brought about the political person that he is now.