Allegedly for his involvement in obtaining fictitious credits worth $4b from Saudi King Abdullah Fund for Agricultural investment to finance agricultural projects in Ethiopia.

Ethiopian born Saudi tycoon, Mohammed al-Amoudi, is among those arrested in Saudi Arabia as the Kingdom’s newly formed anti-corruption campaign targets princes, ministers and several other officials and businessmen.

Reuters listed 17 princes and officials and Mohammed al-Amoudi’s name was also mentioned as one of the businessmen arrested.

Al- Amoudi, whose latest worth is $10.3 billion, according to Forbes, is the son a Saudi father and an Ethiopian mother. He has agricultural, construction and energy businesses in Sweden, Saudi Arabia and Ethiopia.

Al- Amoudi hit the jackpot with gold mining in Ethiopia, and works very closely with Ethiopia’s ruthless dictators. He is the darling of the TPLF oligarchy and was awarded large swaths of agricultural land and prime plots in the capital Addis Ababa.

The Saudi owned Al Arabiya broadcaster first broke the news of the arrest of several princes and ministers on orders of the Crown Prince Mohammed bin Salman, who heads the new anti-corruption committee. Bin Salman, 32, has become Saudi Arabia’s most powerful man and has been appointed by his father King Salman to lead key powerful positions in the government.

Notable among the detained is Prince Alwaleed bin Talal, whose net worth is $17 billion. He has stakes in News Corp, Citigroup, Twitter and a number other western companies.

The anti corruption committee has the right to investigate, arrest, ban from travel, freeze accounts and portfolios, track funds and assets of individuals involved in corruption practices, according to the Al Arabiya report.

Among the detained princes was reportedly Alwaleed bin Talal, one of the world’s richest men.

The Saudi government on Saturday announced the arrest of at least 10 members of the ruling royal family, four current ministers and tens of former ministers in what it called an effort to reign in corruption, and a cabinet reshuffle that removed the strongest potential rival to likely future king Crown Prince Muhammad bin Salman.

Among the detained princes was Alwaleed bin Talal, one of the world’s richest men and a top investor in media giant NewsCorp, Twitter and other major companies, according to the Wall Street Journal and the New York Times.

The arrests were carried out by a new anti-corruption committee chaired by Prince Muhammad, according to state-owned Al Alarabiya TV.

The cabinet reshuffle saw Prince Miteb bin Abdullah replaced as minister of the National Guard by Khaled bin Ayyaf, while Economy Minister Adel Fakieh was removed in favor of his deputy Mohammed al-Tuwaijri, according to a royal decree carried by state-run media.

Prince Miteb, the preferred son of the late King Abdullah, was once thought to be a leading contender for the throne before the unexpected rise of Prince Mohammed two years ago. 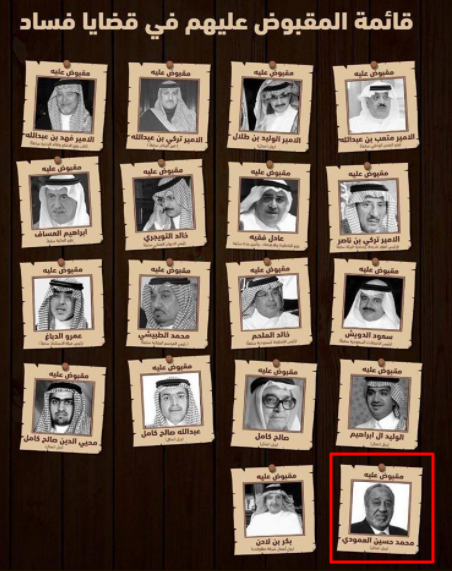 He had inherited control of the National Guard, an elite internal security force built out of traditional tribal units, from his father, who ran it for five decades.

Prince Miteb was the last remaining member of Abdullah’s branch of the family to hold a position in the upper echelons of the Saudi power structure.

The move consolidates Crown Prince Mohammed’s control of the kingdom’s security institutions, which had long been headed by separate powerful branches of the ruling family.

The alleged targeting of Prince Alwaleed is especially striking because he is one of the most visible Saudi power players not directly under Prince Mohammed’s control. He has gained further attention in recent years because of his criticism of President Donald Trump, who’s built close ties with Prince Muhammad and hours before the announcements of the arrests unexpectedly tweeted about Saudi Arabia’s plan to publicly float part of its state-owned oil company for the first time.

Prince Mohammed, the king’s 32-year-old son, already serves as defense minister and was named heir to the throne in a June reshuffle that sidelined his older cousin, Prince Mohammed bin Nayef who had also served as interior minister.

He has been responsible at the same time for running Saudi Arabia’s war in Yemen, dictating an energy policy with global implications and behind the plans for the kingdom to build a future after oil.

Prince Mohammed, who has pledged to go after graft at the highest levels, will now also head up the new anti-corruption body, which was given broad powers to investigate cases, issue arrest warrants and travel restrictions, and freeze assets.

“The homeland will not exist unless corruption is uprooted and the corrupt are held accountable,” the royal decree said.

The country’s new economy minister, Tuwaijri, is a former Saudi air force pilot and former chief executive of HSBC’s Middle East operations who has led the economy ministry’s program to privatize some $200 billion of government assets.

He replaces Fakieh, who served as the point man for the kingdom’s wide-ranging economic reforms since his appointment as economy and planning minister in 2015.

A former food executive with a reputation for pushing through politically sensitive reforms, Fakieh had previously served as labor minister, health minister and mayor of Jeddah.

Fakieh faced down fierce opposition from the business community as labor minister when he established quotas for foreign workers to boost jobs for Saudis.

Under Prince Mohammed, Fakieh led the development of a national transformation plan and privatization drive launched last year to end the kingdom’s vulnerability to an unpredictable oil market. His replacement comes as the kingdom makes adjustments to that plan, a process dubbed NTP 2.0.

The royal decree did not say whether Fakieh would hold any other government position. Former ministers often serve in advisory roles after leaving their posts.