By Mark Anderson | for The African Report,

The evening sun casts a glow over the Bisha mine as the last dump trucks of the day climb up gravel tracks on their way to a refinery, where copper and zinc ore will be processed and shipped off for sale on the world market. This is Eritrea’s first operational mine and the government hopes that three more will jump-start the economy when they come online in the next two years.

Bisha has contributed more than $755m to the Eritrean economy since it began production in February 2011, according to Nevsun Resources, the Canadian mining company that owns 60% of the mine. While the government says that much of this revenue goes towards operational costs and debt repayments, there is little doubt that more mines would offer a dramatic lift to Eritrea’s economy, which is struggling under the burden of mass migration, UN sanctions and diplomatic isolation.

The potential role for mining to help spur Eritrea’s economy is not hard to see. The Eritrean National Mining Corporation (ENAMCO) gets an automatic 10% stake in every mining project, as well as the option to buy an additional 30% share, as per the Western Australian mining code, on which Eritrea based its mining laws. Eritrean state-owned companies, mainly Segen Construction Company, have also earned money building roads and staff housing from the mines.

“The contribution that mining will make to the Eritrean economy will be tremendous. If you have four mines running and if there’s a good price of metal at that time, then the contribution will be really significant.”

The value of gold, copper and zinc has tumbled with the recent global downturn in metal prices. Nevertheless, with three more mines scheduled to begin pro-duction by 2018, revenue from the sector could earn the government more than $1bn per year. Alem explains:

“It’s not like when gold was $1,700 an ounce, but still with the current price we are making profits because [Bisha] is a very low-cost operation.”

Hagos Ghebrehiwet, an adviser to Eritrea’s President Isaias Afewerki and an architect of the rebirth of the country’s mining industry, plays down the importance of the sector today. However, he argues that it will play a transformative role in the future.

Hagos says that Eritrea earns about $200m per year from Bisha:

“What is $200m a year in Eritrea? Nothing. Our annual fuel bill is over $300m. Food imports are about $200m,” he says. “Almost 85% of the revenues from mining are spent through foreign currency on fuel, trucks, spare parts. So it’s going out not into the economy.” 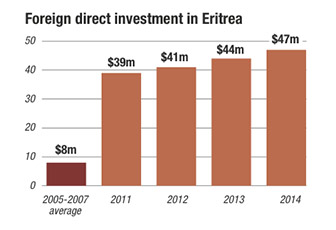 Running underneath Eritrea’s arid mountain landscape is the Arabian Nubian Shield, a stretch of minerals that straddles both sides of the Red Sea. Many deposits of gold, copper, zinc and potash are buried deep in the ground. The country is attracting a host of exploration outfits and junior miners keen to discover world-class assets with the aim of selling them on to major companies down the line or bringing in investors to develop them.

Eritrea’s first mine, the Bisha Mining Share Company, employs about 1,500 people and is a 24- hour operation that produces 688tn of copper concentrate and 166tn of copper every day. It is expected to yield copper and zinc until 2025, but further exploration in nearby Harena and Mogoraib River could to extend its life. Cliff Davis, Nevsun’s chief executive officer, says:

“We expect that the Bisha mine will go on for decades, with the state as its partner.”

Next to come on stream is the Zara gold mine, joint-owned by ENAMCO and China SFECO Group. It is now in the commissioning phase, where project components are tested. Production is expected to begin at the end of March.

That will be followed by the Asmara project, a group of three deposits on the outskirts of the capital, which is set to start production by the end of the year. It is majority owned by Canadian mining company Sunridge Gold, which last year announced a $88m deal to sell its 60% stake in the project to China’s Sichuan Road & Bridge Group (SRBG). The Asmara project is estimated to contain 574,000tn of copper, 930,000oz of gold and 1.2m tonnes of zinc.

The Colluli potash project, which is owned by Australian company Danakali and among the shallowest potash deposits in the world, is slated to begin production by 2018. The mine sits in the Danakil Depression, one of the hottest and lowest points on earth, where more than 6bn tonnes of measured and indicated potassium-bearing salts have been identified to date. In a sign of the mine’s huge potential, ENAMCO purchased an additional 40% stake, bringing its total ownership to 50% of the deposit.

In addition to Nevsun Resources and China SFECO, which are exploring near their active mines, 14 foreign firms from Canada, Australia, China, Russia, India and Sudan are exploring for mineral assets in the country, according to the mines ministry’s Alem.

Eritrea’s first mineral exploration was carried out in Debarwa, a town just south of Asmara, in 1955, when Eritrea was still part of Ethiopia. Prospector Michael Tekele was the first person to discover a mineral deposit in Eritrea, which was a former Italian colony, then a British protectorate, and finally a province within Ethiopia until it gained its independence in 1991.

Combing through the desert in Debarwa, a short drive away from Asmara, a deposit of gold, copper and zinc was found. The government signed a deal with Nippon Mining, a Japanese firm, to build an 180m head-frame to drill deep beneath the earth and extract mineral samples. About 75 holes were drilled between 1970 and 1974, as interest in the sector gathered.

A coup led by Mengistu Haile Mariam then threw the country into civil war, which ravaged the region for almost three decades. Development of the mining industry stalled for decades until Eritrea won independence from Ethiopia in 1991 after the Eritrean People’s Liberation Front (EPLF) captured Asmara. In 1996, after Eritrea had gained independence, foreign companies began to return.

Companies like Phelps Dodge, a now defunct US mining firm called Sub-Saharan Mining and a host of Canadian companies began to scour Eritrea for mineral deposits.

Since then, the government has trumpeted a unique brand of self-reliance by shunning foreign aid and instituting a national service programme to develop the country. Presidential adviser Hagos, who is also director of economic affairs for the ruling People’s Front for Democracy and Justice, explains the government’s priorities: “Social justice, self-reliance, public and private investment – these are the key pillars of the Eritrean economy.”

A brutal border war between Eritrea and Ethiopia raged for two years from1998 to 2000, killing an estimated 70,000 people. Western diplomatic sources say Ethiopia has positioned about 150,000 troops on territory awarded to Eritrea in the 2002 Algiers Agreement, which ended the war.

Eritrea’s government says that its strict national service programme, which requires citizens over 18 to work for as little as 500 Nakfa a month ($30 through official rates and $10 on the black market), is necessary for the country to defend itself against Ethiopia. But this programme is said to be the key reason that an estimated 4,000 people leave Eritrea every month, according to the UN High Commissioner for Refugees.

The government says that the real number is distorted by Ethiopians and other nationalities who masquerade as Eritreans in the hope of gaining asylum in Europe. President Isaias has acknowledged that people are leaving the country, but says they leave for purely economic reasons.

Eritrea’s first mine was hit by claims from Human Rights Watch (HRW) in 2013 that people working in the national service were forced to work in its early stages of construction. Three former conscripts who say they worked at the mine have sued Nevsun in the Supreme Court of British Columbia in Canada, saying that the company failed to protect their human rights. Davis, Nevsun’s chief executive, has said he is “confident that the allegations are unfounded”. Leslie Lefkow, deputy Africa director at HRW, describes as “worrying” Nevsun’s “reluctance to admit it ever used forced labour, even in the early construction phase”.

For the mining industry to have maximum impact on the Eritrean economy, a skilled labour force has to be trained. Some say the mineral sector could help keep Eritreans in the country. According to a Western diplomat based in Asmara: “Mining is the most obvious prospect for short-term job creation in Eritrea.”

Bisha is setting the benchmark for future mining projects, says Fesseha Ghebrehiwet, chief services officer at the Bisha Mining Shares Company and a former EPLF fighter. “What you see here will be replicated in other places around the country. We have to be very careful. It has to be world class.”

Critics say the government is banking on mining cash to paper over the cracks in the regime. Eritrea does not publish a national budget, and mining industry insiders say they do not know where revenue from the mining sector are spent. “It’s a black hole,” says another Western diplomat who requested anonymity.

Feruz Werede, an Eritrean activist, says: “For the past several years, Eritreans have been putting up with all sorts of violations perpetrated by the government in the hope that things would get better when the economy recovers as a result of new mining revenues. But several years into the mining boom, things seem to have gotten worse and Eritreans – particularly the young – are giving up hope that the situation will improve.” She adds: “They are resorting to leaving the country to escape the regime’s grip.”