What a way to open Team Dimension Data’s 2017 account!

By Team Dimension Data for Qhubeka,

The 4th stage of the Volta a la Comunitat Valenciana was the queen stage of the race, ending on the 4km climb to Llucena. Nairo Quintana (Movistar) showed his class by taking the stage win and the lead in the general overall classification.

The only rider to come close to matching the Colombian was our young Eritrean climber, Merhawi Kudus. Kudus finished 2nd with Amaro Antunes (W52-FC Porto Porto-Canal).

Stage 4 of the Volta a la Comunitat Valenciana was a brutal stage with over 4000m of climbing in just 180km. There was a rapid start to the stage thanks largely to our overnight King of the Mountains leader, Johann van Zyl, attacking from early on. Unfortunately, the peloton would not let Van Zyl go. When the break did eventually go clear, Van Zyl was not present which meant he would surrender the polka dot jersey.

The good news for Team Dimension Data for Qhubeka was that Igor Anton was part of that 6-rider breakaway. With Anton up the road, our African Team could conserve energy in the peloton as we looked to protect Kudus for the final climb. The relentless nature of the consistently up and down course took its toll on the peloton and with 15km to go, only 50-odd riders remained in the main group.

The break, as expected, had fatigued greatly by this point and Anton and co. were soon back in the fold. The final finishing climb of the stage was a real brute, averaging 12% in gradient for 4km. As the race hit the lower slopes Quintana wasted no time in attacking, as he was looking to gain time in the overall classification. Only 1 rider could respond to the Quintana attack and it was our 23-year-old Eritrean, Kudus.

Quintana was flying, despite some sections of the road pitching up to over 20% gradient. Kudus was hanging tough as the duo distanced the rest of the field. Just inside 2km to go, Kudus had to let the Colombian go and resorted to riding his own pace up the climb. Quintana went on to take a good win while Kudus was able to fend off the challenge posed by Antunes to take 2nd on the stage. A remarkable performance by our young African which also saw him climb to 8th on the overall standings.

I am really happy with my performance from today. Luckily I knew this climb because we did it in the Vuelta last year. When Quintana attacked I tried to follow, after some time it was too much. My director told me to ride my pace so I am happy with the end result. Thank you to my team for looking after me all day. Daniel did an excellent job for me before the climb at an important moment, but thank you to everyone, I am glad I could get this result after their hard work

Today was the queen stage of the Vuelta a Valencia with 4269 meters of elevation. A really hard stage specially in the beginning of the season when the bodies are not in a super shape yet. After a super fast rhythm Igor was in the break of the day. The race kept a high speed the entire day, the bunch was reduced to 50 riders before the last climb. Merhawi was our guy for the day and he did an impressive climb showing us his excellent form. We are very happy to see him ride to such a good result. 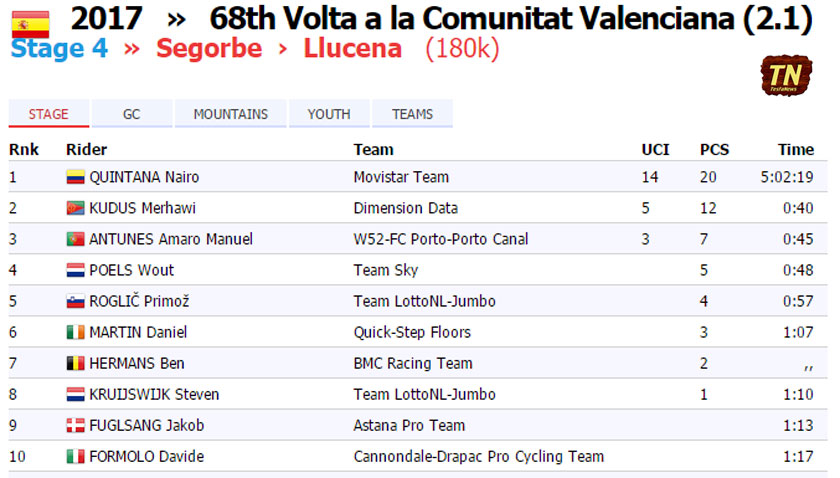