Nevsun Adds $1.5B to Its Eritrean Resources, the Market Only Yawns

Nevsun Resources (NYSEMKT:NSU) is down by 16% year to date as the problems with the copper circuit at its only producing mine resulted in a lowered 2017 copper production guidance and increased unit cash costs.

The situation is not good but it definitely isn’t catastrophic and the company isn’t endangered. If the 2017 production guidance of approximately 15 million lb copper and 215 million lb zinc is reached, Nevsun should be able to generate a small profit.

Given that Nevsun is debt free and as of the end of 2016, it held cash & cash equivalents worth almost $200 million, the copper circuit problems are only a negligible event from the long-term point of view. The problem is that right now, the markets focus on this problem and attribute an excessive importance to it. As a result, the share price keeps on moving in a sideways trend and it doesn’t react on the positive news flow. 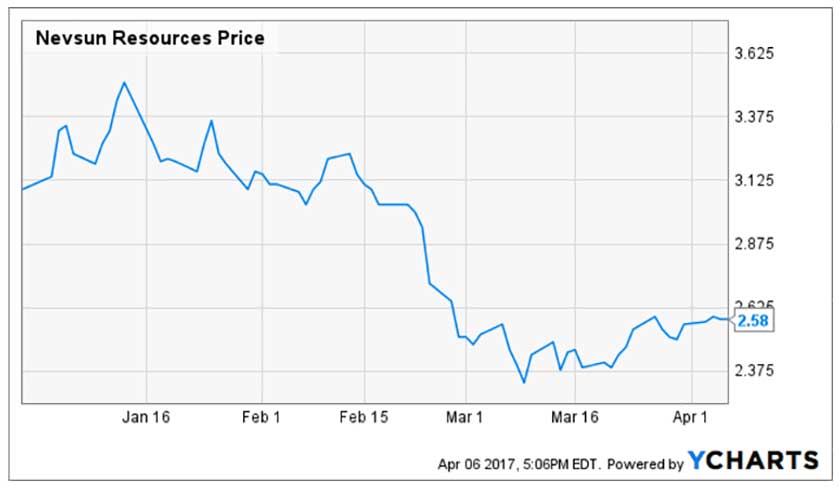 On March 23, Nevsun announced the update of the resource estimate for its Eritrean Bisha mine. The Bisha mine is important as it is Nevsun’s only producing asset. And although the copper circuit doesn’t work correctly right now, Bisha has entered the phase of its mine life when it turned from a copper mine with some gold and zinc byproducts into a zinc mine with some copper and gold byproducts. And it was the zinc resources that experienced the biggest growth during 2016.

The measured, indicated, and inferred resources grew by 58.4 million lb copper, 1.82 billion lb zinc, and 1.52 million toz silver, and it declined by 7,000 toz gold. At the current metals prices of $2.65/lb copper, $1.25/lb zinc, $1,255/toz gold, and $18.25/toz silver, the total value of the added metals is nearly $2.45 billion. The value of Nevsun’s 60% share is almost $1.5 billion. But since the increased resource estimate was announced, Nevsun’s market capitalisation has managed to grow by approximately $30 million. The calm reaction can’t be explained even by the metals prices decline, as the metals prices remain almost unchanged. The markets just focus on the copper circuit issues and ignore anything else. 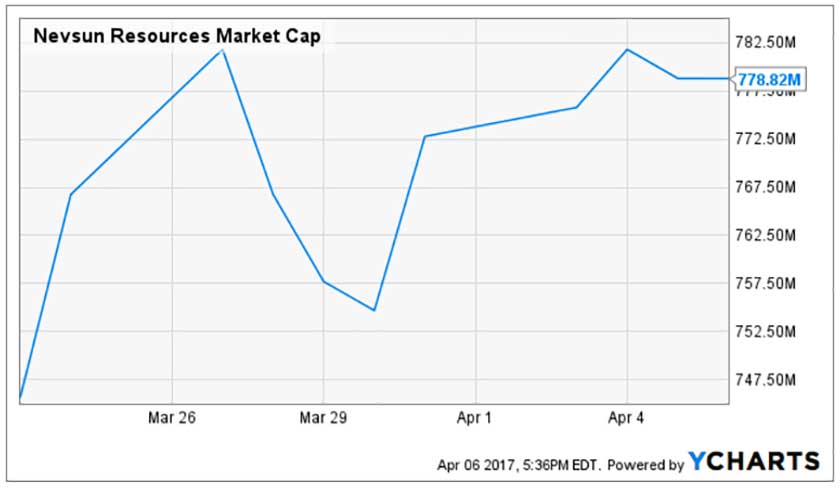 But the updated resource estimate wasn’t the only positive news announced by Nevsun Resources lately. On April 4, Nevsun Resources announced that drill hole HX-083 has expanded the Harena deposit 150 meters further to the west. It is a great news as the Harena deposit was the main reason why Nevsun’s Eritrean resources experienced an impressive growth. The 2016 drill campaign pushed Harena resources up by almost 130%. And the April 4 news show that Harena hides even more potential.

Moreover, this isn’t all, as Nevsun’s CEO stated:

“The recently completed airborne survey over the Mogoraib River and Tabakin Exploration Licenses that were acquired in 2016 has highlighted a significant number of new shallow drill targets. Evaluation of the highest priority anomalies is currently underway but the full suite of targets will take years to pursue. As we have always stated, Bisha is evolving into a large VMS district with exploration still in its infancy.”

The share market became irrational when it comes to Nevsun Resources. The copper circuit issues got into the centre of its attention and it seems that it’s going to ignore everything else until the problem is resolved. The recent news releases and the subsequent reactions of the share price only confirm this assumption.

Nevsun announced a significant resource growth at its Bisha project in Eritrea and it also announced some very positive drill results that indicate that the resources are poised to grow further. Not to mention the high number of newly identified drill targets.

Bisha alone seems to be worth much more than the current Nevsun’s enterprise value of approximately $600 million. Not to talk about Timok and the other Serbian properties. Over the last couple of weeks, Nevsun Resources became even more undervalued than before.

Right now, shares of Nevsun Resources are an even better buy than a month ago, when they dipped to $2.32. Back then, I predicted that Nevsun’s share price should easily attack the $10 level by 2022 when the Serbian Timok mine should be up and running. But now, I start to think that the $10 price target might be too conservative.