By Lee Thomas-Mason | for metro.co.uk,

Liverpool have declared interest in young Swedish-Eritrean striker Alexander Isak who has been dubbed the ‘next Zlatan Ibrahimovic’.

Isak, who scored on his debut as a 16-year-old for Swedish side AIK in February, is attracting the eyes of Europe’s leading clubs despite having only turned 17 at the end of September. 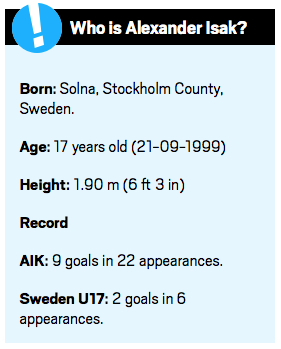 Having established himself in AIK’s title-chasing first-team, Isak has found the net nine times in his 22 appearances for the club.

Last season the youngster impressed the watching scouts in Sweden’s recent UEFA Under 17 Championship qualifiers against Wales, Portugal and Croatia.

“He is a great potential, and I absolutely believe that he will go far,” Isak’s AIK team-mate Obasi told Swedish outlet FotbollSkanalen.

“If he concentrates and continues as he is, I think he can become Sweden’s next Ibrahimovic.
He has the potential, everyone can see it.”